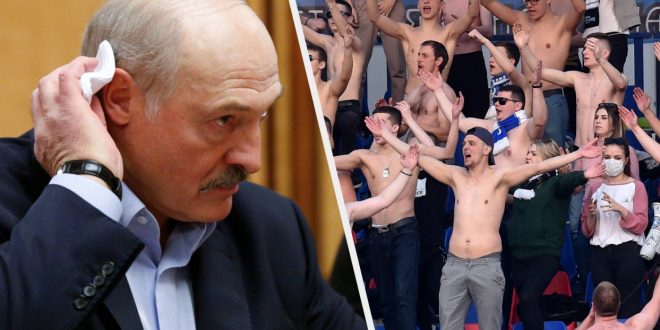 “It’s better to die standing on your feet than to live on your knees,” said Belarusian president Alexander Lukashenko, before a hockey game last week.

The journalists at BuzzFeed News are proud to bring you trustworthy and relevant reporting about the coronavirus. To help keep this news free, become a member and sign up for our newsletter, Outbreak Today.

He has been famously described as Europe’s last dictator. But Belarusian President Alexander Lukashenko is proving himself worthy of another label: coronavirus truther.

As leaders across the world close their countries’ borders, shut down transportation, ban mass gatherings and order millions of people indoors to try to halt the spread of the new coronavirus, a defiant Lukashenko is ignoring expert advice and taking a different, dangerous approach — by doing almost nothing at all.

Lukashenko has described the stringent measures taken by other countries as “utter stupidity” and told Belarusians that the pandemic is nothing more than a “psychosis.”

As of Monday, Belarus had 152 cases of COVID-19, the disease caused by the coronavirus, according to its health ministry. But in the former Soviet republic of 9.5 million people, there is no talk, let alone practice, of social distancing or quarantine. Shopping malls remain open, public transportation continues to run, theaters are screening films, restaurants carry on serving customers and the country’s premier soccer league plays on. Last Friday, a match between Belarusian teams Torpedo-BelAZ Zhodino and Belshina Bobruisk was the only professional match played in the world. Remarkably, with professional soccer leagues everywhere else suspended, people are actually tuning in to watch Belarus’s league for a change.

Other authoritarian and populist leaders have similarly played down the coronavirus pandemic ravaging countries the world over. But many of them eventually came around to enforcing measures recommended by health experts to stop its spread.

After telling Russians the “situation was under control” two weeks ago, Vladimir Putin finally ordered borders closed and declared this week a national paid holiday in order to get people to stay home. Similarly, President Donald Trump, after minimizing the threat of the virus, came around to ordering more drastic measures and social distancing guidelines as it swept across the US this month.

But Lukashenko’s approach stands out — not because of what he has done, but because of what action he still has not taken and the poor advice he is doling out. “The world has gone mad from the coronavirus. This psychosis has crippled national economies almost everywhere in the world,” Lukashenko said last Friday, indicating he planned to continue with the status quo. He also cited Trump’s warnings about ensuring that the cure is not worse than the virus as justification for his own lax response.

A former collective farm director with an odd penchant for root vegetables who has been in power since 1994, Lukashenko had previously encouraged Belarusians to go out and work the fields to ward off the virus. “In the countryside, people are working in the fields, on tractors. No one is talking about the virus,” he said. “There, the tractor will heal everyone. The fields heal everyone.” His comments prompted a meme on social media: red “Tractorin” pills shaped like tractors.

Lukashenko also recommended that his citizens drink vodka, which he said would kill the virus but most certainly does not, according to actual medical experts. “I don’t drink, but recently I have said that people should not only wash their hands with vodka but also poison the virus with it,” the autocrat said last week. “You should drink the equivalent of 40-50 grams of the pure vodka daily.”

He had one caveat, however: “But not at work.”

Lukashenko had one more suggestion for fighting the coronavirus: frequent visits to the sauna, where he claimed without any sound evidence the virus could not survive, due to the heat. Perhaps the only piece of good advice he gave to the public was to “wash your hands more often.”

Lukashenko has taken some action against the coronavirus. For instance, he has imposed a requirement for all foreigners entering the country to go into 14 days of self-isolation and ordered companies to increase the production of ventilators.

A World Health Organization representative, careful not to criticize Lukashenko directly, told the state-run BelTA news agency that the country was “coping” well so far, praising its testing capacity and ability to quickly isolate cases in hospitals.

Still, it seems Lukashenko has done more to keep the public from receiving information about the coronavirus than he has to try and stop it from spreading. Last week, he ordered his notoriously heavy-handed state security service — still named the KGB even three decades after the collapse of the Soviet Union — to investigate anyone who reports a death related to COVID-19.

The first person targeted after the order was Sergei Satsuk, the editor of the Belarusian news outlet Yezhednevnik (Diary), who on March 23 published an article doubting Belarus’ coronavirus statistics and writing that “it’s time to panic.” Two days later, KGB agents picked him up outside Minsk and slapped him with what he said was a bogus bribery charge. Authorities also raided his news outlet’s offices.

It will likely be harder to keep information about deaths from coming out as the crisis in the country deepens, which health experts say is only a matter of time. “Quarantine will be announced sooner or later in Belarus,” a doctor of Belarusian descent who works at a New York hospital told the independent Belsat news outlet on Sunday. “Of course, the later this is done, the more serious the wave of severe patients will be, the fewer people will survive and the more doctors will suffer.”

On Saturday, Lukashenko appeared relaxed and unconcerned. Donning hockey gear and stepping onto the ice for an exhibition game with some of the Belarusian elite, he told a TV reporter who asked whether he is afraid of the coronavirus, “It’s better to die standing on your feet than to live on your knees.”