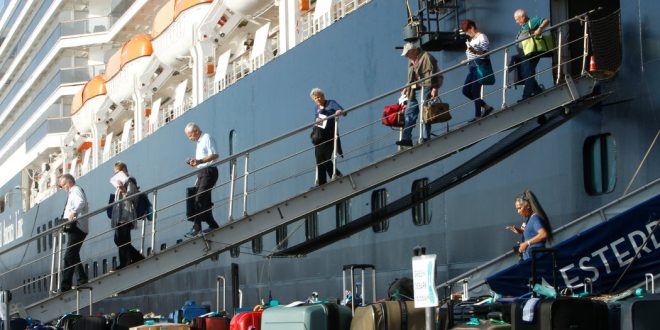 After hundreds disembarked from a cruise ship, an American tested positive for coronavirus.

An American woman who disembarked from a cruise ship in Cambodia last week has tested positive twice for the coronavirus since flying on to Malaysia, officials in that country said on Sunday.

Officials also said that more than 140 other passengers from the ship, the Westerdam — which Cambodia allowed to dock after five other countries turned it away over concerns about the coronavirus — had flown from Cambodia to the airport in Kuala Lumpur, Malaysia’s capital, and that all but eight had been allowed to continue to their destinations, including airports in the United States, the Netherlands and Australia.

Six of the passengers were in Malaysia under surveillance awaiting results of coronavirus tests, officials said.

Eyal Leshem, the director of the Center for Travel Medicine and Tropical Diseases at the Sheba Medical Center in Israel, called the disclosures “extremely concerning” and said the flights taken by the passengers from Kuala Lumpur. substantially increased the risk of a global pandemic. “We may end up with three or four countries with sustained transmission of the virus,” he said.

“It may be more and more difficult to make sure this outbreak is contained only within China,” Dr. Leshem said.

The Westerdam, carrying 2,257 passengers and crew, departed from Hong Kong on Feb. 1 and was at sea for nearly 14 days, the time frame that is believed to be the maximum incubation period for the highly transmissible virus.

The rate of new cases appears to slow, even as the death toll continues to rise.

China reported 2,009 new cases of coronavirus and 142 associated deaths in the previous 24 hours on Sunday, days after the government changed the criteria for how it tracks cases.

In all, more than 68,500 people have been infected and at least 1,669 have died worldwide, officials have said. The vast majority of cases, and all but a few of the deaths, have been in mainland China, with the heaviest concentration in Hubei Province, the center of the outbreak.

Even as the death toll mounted, the fatality rate remained stable, and the rate of new cases has slowed in the past three days. That decline in new cases follows a spike of more than 15,000 on Thursday, when the government began counting cases diagnosed in clinical settings, including with the use of CT scans, and not just those confirmed with specialized testing kits.

More cases are reported on the cruise ship docked in Japan, as Americans’ departure nears.

The United States will evacuate its citizens on Sunday from a cruise ship quarantined in the Japanese port city Yokohama, on which hundreds of people have been infected with the coronavirus.

Japanese health officials said on Sunday that the number of confirmed cases found on the ship had grown by 70, to 355.

When the ship was put into quarantine almost two weeks ago, there were more than 3,700 passengers and crew members aboard, including about 400 Americans. Those diagnosed with the virus, and some particularly vulnerable passengers, have already been taken off the ship.

The United States Embassy in Japan had previously recommended that American citizens stay aboard the ship during a 14-day quarantine period. But it changed course on Saturday, citing “a rapidly evolving situation” as conditions appeared to worsen.

The State Department chartered flights for the Americans for Sunday, the embassy said in a statement. Those with coronavirus infections or symptoms will not be allowed to board. Once in the United States, the evacuees will be required to undergo a two-week quarantine at Travis Air Force Base in Fairfield, Calif., or Lackland Air Force Base near San Antonio.

Those who do not take a charter flight will not be allowed to travel to the United States until March 4.

Canada and Hong Kong also said they would charter flights for passengers on the ship, though it was not immediately clear when those flights would leave. Officials in the Philippines also said Sunday that the country was working to bring home more than 500 crew members.

Under fire for its initial response to the coronavirus epidemic, China’s authoritarian government appears to be pushing a new account of events that presents President Xi Jinping as taking early action to fight the outbreak that has convulsed the country.

But in doing so, the authorities have acknowledged for the first time that Mr. Xi was aware of the epidemic nearly two weeks before he first spoke publicly about it — and while officials at its epicenter, in the city of Wuhan, were still playing down its dangers.

That new account risks drawing the president, China’s most powerful leader in decades, directly into questions about whether top officials did too little, too late.

In the newly released internal speech that Mr. Xi delivered on Feb. 3, when the epidemic had already spiraled into a national crisis, the Chinese president said he had “issued demands about the efforts to prevent and control” the coronavirus on Jan. 7, during a meeting of the Politburo Standing Committee, the highest council of the Communist Party, whose sessions are typically very secretive.

In the speech, he also said he had authorized the unprecedented lockdown of Wuhan and other cities beginning on Jan. 23.

“I have at every moment monitored the spread of the epidemic and progress in efforts to curtail it, constantly issuing oral orders and also instructions,” Mr. Xi said of his more recent involvement.

Mr. Xi’s advisers may have hoped that publishing the speech would dispel speculation about his recent retreat from public view and reassure his people that he can be trusted to lead them out of the epidemic.

But the speech could expose Mr. Xi to criticism that he didn’t treat the initial threat urgently enough, and make it difficult for him to shift blame onto local officials.

In early January, leaders in Wuhan, the city at the epicenter of the outbreak, were giving open assurances that there was no clear evidence of human-to-human transmission.

Previous Baghdad explosions: rockets strike near US embassy in Iraq
Next The US is finally evacuating Americans from the Diamond Princess. Here’s why that’s made them mad