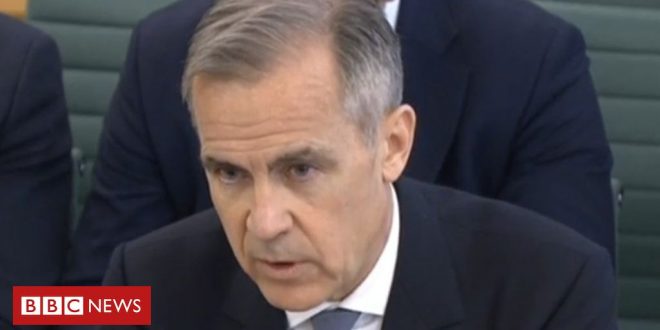 Bank of England governor Mark Carney has warned that coronavirus could produce a “large” but “ultimately temporary” shock to the economy.

“It is beyond the containment phase,” Mr Carney told the Commons Treasury Committee, before adding the economic effects could last up to six months.

However, he said the Bank was ready to help businesses and households adjust to the impacts of the deadly virus.

And he said the prospects are “we will have disruption not destruction”.

On Monday, the Organisation for Economic Cooperation and Development (OECD) warned the global economy could grow at its slowest rate since 2009 this year because of the coronavirus outbreak.

The influential think tank forecast growth of just 2.4% in 2020, down from 2.9% in November, but it said a longer “more intensive” outbreak could tip many countries into recession.

Mr Carney said that the Bank would monitor any supply disruptions and the effects on cashflow and economic confidence.

It will also check the contingency plans of banks, insurers and other financial institutions.

Mr Carney hands over his role to Andrew Bailey on 16 March, and said the two had been in constant contact in order to have a smooth transition.

Hopes that governments and major central banks will work together to tackle the economic hit of coronavirus are growing.

The US Federal Reserve and the Bank of Japan have both issued statements saying they are ready to help stabilise markets, after global stocks suffered heavy falls last week.

G7 finance ministers and central bankers will take part in a conference call on the economic impact of coronavirus on Tuesday at 12:00 GMT.

“The lines of communication globally between central banks are wide open,” Mr Carney told MPs. “It is reasonable to expect a response that reflects a combination of fiscal measures and central bank initiatives.”

Both Australia and Malaysia have cut interest rates as a result of the outbreak.

The Reserve Bank of Australia cut rates to a record low of 0.5% because of the “significant effect” of the outbreak on the country’s economy.

The analysis that the economic shock of coronavirus’s impact would be “temporary” suggests the Bank of England is willing to act decisively to create a financial “bridge”.

Mark Carney also said the fact that in the near term this was likely to be more of a demand issue than a supply issue is a “consideration for the stance of monetary policy” – a hint that the Bank of England is considering rate cuts to boost confidence.

The BBC understands a statement from G7 finance ministers acknowledging the economic impact of coronavirus, and the willingness to work together, is likely to be released after their conference call.

President Trump has renewed his social media pressure on the US Federal Reserve to cut interest rates because of the outbreak.

Previous Intel’s 10th-gen desktop CPUs are coming soon, according to a Dell ad
Next Steelers offseason plan? There may have been some clues at the NFL combine.