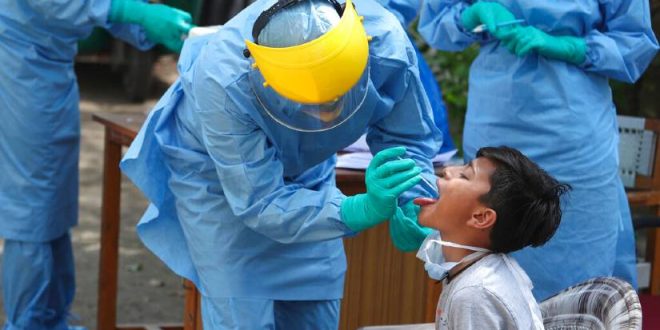 Coronavirus Outbreak LATEST Updates: As 92 more cases of COVID-19 have emerged in Maharashtra, the number of such patients in the state reached 1,666 on Saturday, the state health department said.

Seventy-two of these new cases were detected in Mumbai, it said.

Five others tested positive in Malegaon, four in Thane, two each in Panvel and Aurangabad, one each in Kalyan-Dombivali, Vasai-Virar, Pune, Ahmednagar, Nashik city, Nashik rural and Palghar, the department added.

At a time when Maharashtra has been identified as the worst COVID-affected state with 1,574 confirmed cases, a major development was seen in Sangli district. The Islampur region in Sangli, one of the first hotspots in the state, became “COVID-free” on Saturday, News18 reported.

Sangli was red-flagged by the Centre after the region registered 26 positive cases. All the cases were reported from Islampur area.

Strict lockdown, quarantine and contact tracing are the major reasons behind the region being coronavirus free. Sangli was identified as one of the first hotspots by the Central Health Ministry.

CNN-News18 reports say that Prime Minister Narendra Modi will be interacting with chief ministers from all states at 11 am today. A call on whether the 21-day lockdown to check the spread of coronavirus, ending next week, should be extended or not, will be taken during the meet.

The number of containment zones in Delhi was increased to 30 on Friday after an addition of six more areas. These include Nabi Karim, E pocket GTB enclave,  street no 18 to 22 of Zakir Nagar and nearby area of Abu Bakar Masjid, Zakir Nagar.

The highly infectious COVID-19 has killed 239 people in the country, with 40 new deaths reported in the last 24 hours. The total number of positive cases is now at 7,447 after 1,035 new cases were registered.

The total number of COVID-19 positive cases in the country has reached 7,600, with more than 800 new cases being recorded on Friday. Fatalities in the country, according to data compiled by Worldometer, stand at 249.

The total number of coronavirus cases in India surged to 6,761 on Friday with 37 new deaths and nearly 900 new cases in 24 hours as several places including Delhi and Mumbai reported further spread of the deadly virus, which has infected over 16 lakh people globally since its emergence in China last December and the worldwide toll is fast approaching 1,00,000.

Of the total cases, 6,039 were active patients while 515 have been cured or discharged, and one migrated while 206 have died so far.

According to health ministry data, Maharashtra continued to top the list with 1,364 cases, while Delhi (894) and Tamil Nadu (834) seemed to be inching closer to the 900 mark. A medical team member conducts a swab test during lockdown to control the spread of the new coronavirus in Ahmedabad. AP

Maharashtra has also registered the maximum deaths accounting for 97 of the total 206 deaths in the country, which is over 5.7 times that of Gujarat, which recorded 17 deaths, the second highest in the country.

These numbers, however, do not represent the actual reality on the ground as a PTI tally of numbers reported by various states as on 9.30 pm showed a total of 7,510 people having been affected by the virus nationwide so far with at least 251 deaths. More than 700 have been cured and discharged.

The Health Ministry in the meantime maintained that no community transmission is taking place as yet in India, while the World Health Organisation also put the country in a category named ‘cluster of cases’ — a notch below the community transmission stage and a classification used by the global body for cases “clustered in time, geographic location and/or by common exposures”.

Amidst this, on Friday, Punjab became the second state to extend the lockdown beyond 14 April, a day before Prime Minister Narendra Modi is scheduled to hold a video conference with chief ministers to take stock of the situation.

The Union home ministry also sought views of state governments on the 21-day lockdown including on whether more categories of people and services need to be exempted, officials said on Friday, amidst indications of a possible two-week extension of the nationwide restrictions to curb the spread of coronavirus.

The WHO has warned that a hasty lifting of restrictions imposed to control the COVID-19 pandemic could lead to a fatal resurgence of the deadly virus.

Meanwhile, the Union health ministry said the rate of people testing positive was only 0.2 percent on Thursday when more than 16,000 samples were tested. Cumulatively close to 1.5 lakh samples have been tested so far across India.

Thirteen COVID-19 patients died during the day, taking the death toll in the state to 110.

As many as 132 new patients were found in Mumbai alone, state officials said.

Ten coronavirus patients died in Mumbai and one each in Pune, Panvel and Vasai-Virar. Nine of the deceased were men and four women.

In Tamil Nadu, a 70-year-old woman died of coronavirus on Friday, taking the toll in the state so far to nine, while 77 people tested positive, pushing the total to 911 (the second highest in the country), Chief Secretary K Shanmugam said.

The woman died in Tuticorin, he said.

Of the total number of positive cases, Chennai topped the list with 172, followed by districts of Coimbatore 86, Erode 60, Tirunelveli-56, Dindigul 54, Namakkal 41, Chengalput and Theni 40 each, Trichy and Ranipet 36 and Nagpattinam 12, he said.

On Friday, Delhi registered 183 new cases in the last 24 hours, the highest jump so far, taking the National Capital’s tally of coronavirus cases to 903 (the third highest in the country).

Two more deaths linked to coronavirus were reported, taking the total number of fatalities to 14.

Among the fresh areas that have been included in the list of containment zones are in west, central and south east Delhi.

With 44 persons testing positive on Friday, the number of coronavirus cases in Madhya Pradesh climbed to 470, while one more person succumbed to the disease, taking the death toll to 37, health officials said.

Twenty-one new cases were reported in Bhopal, which took the tally of COVID-19 patients in the state capital to 119, they said. Indore has reported the highest 249 cases in the state with 14 new cases being reported on Friday.

The total number of coronavirus cases in Rajasthan rose to 561 as 98 fresh cases were reported in the state on Friday while the fatality count due to the disease increased to eight with the death of a 65-year-old woman at a hospital here, officials said. The fresh cases include eight people evacuated from Iran, they said.

On Friday, the maximum number of cases — 53 — were reported in Jaipur, a hotspot, taking the tally of COVID-19 patients in the state capital to 221.

Meanwhile, the total number of confirmed coronavirus cases in Uttar Pradesh rose to 433 on Friday, with 23 new cases being reported, of whom 21 are linked to the Tablighi Jamaat event in Delhi, the state government said.

It said the deadly virus has now spread to 40 of the state’s 75 districts, with Agra being the worst hit at 88 positive cases and one death.

On Friday, Gujarat recorded the highest jump so far in a single day after as many as 116 new cases were reported in the last 24 hours, officials said. The number of coronavirus positive patients in the state jumped to 378.

After two more COVID-19 patients succumbed to the infection, the death toll in the state has reached 19, Principal Secretary (Health), Jayanti Ravi, said.

This is for the first time that such a large number of positive cases have surfaced in a single day in the state.

According to Health Ministry, COVID-19 cases have gone up to 473 in Telengana, 363 in Andhra Pradesh and 357 in Kerala.

The ministry also reported 197 cases in Karnataka, 184 in Jammu and Kashmir and 169 in Haryana. Punjab has 132 COVID-19 patients so far while West Bengal has 116 cases.

Bihar has reported 60 cases while Odisha has 44 coronavirus cases. Thirty-five people were infected with the virus in Uttarakhand while Assam has 29 patients followed by Himachal Pradesh with 28 cases. Chandigarh has 18 cases while Ladakh has 15. Jharkhand has 13 coronavirus positive patients so far.

Eleven cases have been reported from the Andaman and Nicobar Islands while 10 were reported from Chhattisgarh. Goa has reported seven COVID-19 infections, followed by Puducherry at five, Manipur at two while Tripura, Mizoram and Arunachal Pradesh have reported one case each.

Punjab chief minister Amarinder Singh Friday announced the extension of lockdown in the state till 1 May, a day after Odisha extended it to 30 April.

Singh said that most of the 27 positive cases reported in his state on Thursday — the maximum daily increase for the state — were those of secondary transmission and expressed apprehension that the state may be entering the community transmission stage of the outbreak.

In Tamil Nadu, an expert committee recommended to Chief Minister K Palaniswami that the lockdown be extended by two weeks beyond 14 April considering the rise in number of cases.

A review meeting was also held by the Prime Minister’s Office during the day on various efforts to check the coronavirus spread, which also discussed ramping up of production of personal protective equipments (PPEs) among other issues.

The Home Ministry, separately, has sought views of state governments on the 21-day lockdown, scheduled to end on 14 April, including whether more categories of people and services need to be exempted, officials said on Friday.

Some of the suggestions made by state governments include allowing construction-related activities in rural areas.

The central government, while imposing the lockdown, had announced that shops dealing in essential commodities, including the online platforms, will remain open, besides services like health, sanitation, police, media, agriculture and banking. Movements of essential and non-essential cargos were also allowed by the government, but there have been reports about disruptions in the supply chain due to lack of labourers and trucks, among other issues.

There have also been reports of depleting levels of essential goods from various parts of the country.

Some states such as Kerala have suggested phased opening of the lockdown, while other suggestions from various states include allowing liquor sale to shore up the revenues and to allow private vehicles on an odd-even basis. However, most states have suggested keeping the public road transport, rail and airline services suspended for more time. Many have also recommended keeping state borders sealed, except for goods movement.

A few states have also suggested area-specific lockdown with stricter restrictions, which are as such being followed in the places identified as hotspots of the virus spread.

In the meantime, more states including Odisha and Telangana made it mandatory for people to wear masks or face covers at public places, while enforcement was beefed up for action against those violating the lockdown conditions.

The Centre also asked states not to allow religious gatherings and processions.

Government officials also said that a decision on bringing Indians from abroad will be taken at a later stage after reviewing the COVID-19 situation.

With inputs from agencies