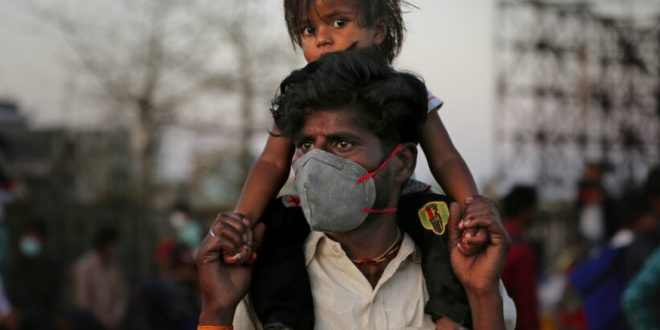 A migrant worker in seen with his child during the 21-day lockdown. (AP)

The novel coronavirus has infected over 1.2 million people and led to nearly 70,000 deaths globally.

More than 1,200 people have died of coronavirus complications in the United States in the past day, with at least 337,072 confirmed infections and 9,633 deaths. The United States entered one of the most critical weeks so far in the coronavirus crisis, with government officials warning that the death toll in places such as New York, Michigan and Louisiana was a sign of trouble to come in other states.

Still, governors of eight states resisted issuing stay-at-home orders aimed at slowing the spread of the respiratory disease, and some churches held large Palm Sunday services in defiance of such orders in their states. New York, the hardest-hit state, reported on Sunday that for the first time in a week, deaths had fallen slightly from the day before, but there were still nearly 600 new fatalities and more than 7,300 new cases. Places such as Pennsylvania, Colorado and Washington, D.C., are starting to see rising deaths.

“This is going to be the hardest and the saddest week of most Americans’ lives, quite frankly. This is going to be our Pearl Harbor moment, our 9/11 moment, only it’s not going to be localised,” US Surgeon General Jerome Adams warned on Fox News on Sunday. “It’s going to be happening all over the country. And I want America to understand that.”

New York Governor Andrew Cuomo said on Sunday that new hospitalizations had fallen by 50% over the previous 24 hours. He cautioned that it was not yet clear whether the crisis was reaching a plateau in the state, which has a total of 4,159 deaths and more than 122,000 cases.

Once the peak of the epidemic passes, Cuomo said a mass rollout of rapid testing would be critical to help the nation “return to normalcy.”

Most states have ordered residents to stay home except for essential trips to slow the spread of the virus in the United States, where more than 335,000 people have tested positive and over 9,500 have died, according to a Reuters tally.

Previous Tiger tests positive for COVID-19 at New York City zoo, first case of its kind in the U.S.
Next Covid-19 crisis: ‘We have had to learn a new disease, new vocabulary, new skills’