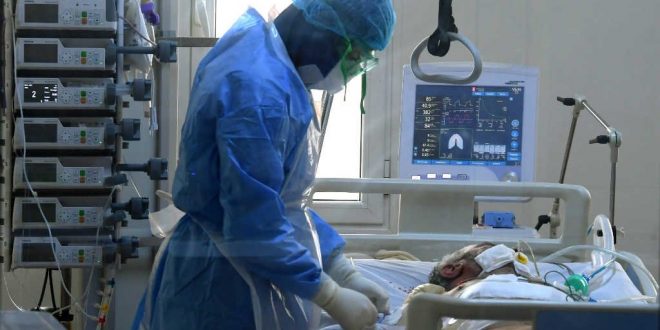 A doctor attends to a Covid-19 patient at an intensive care unit. (Fethi Belaid/AFP)

President Cyril Ramaphosa has admitted that the shortage of intensive care unit (ICU) beds remains the “greatest need” in the government’s fight against Covid-19.

Speaking to a media briefing of the South African National Editors’ Forum (Sanef) on Sunday, the president said he was encouraged to see extra health capacity being created during the lockdown, but would like the number of ICU beds to increase “exponentially”.

South Africans went into a hard lockdown more than two months ago, with the sole purpose of flattening our curve of infections while the country’s health system prepares for an inevitable exponential curve later in the year.

On Friday night, Health Minister Zweli Mkhize and his senior departmental staff disclosed during a media briefing that there are currently 2 309 critical care beds allocated to the Covid-19 crisis.

In early April, then-acting director general of health Anban Pillay told Parliament the country would need between 4 000 and 15 000 ICU beds during peak demand. This number has substantially grown in the projections of scientists advising the government.

A total of 169 Covid-19 patients are currently receiving intensive care hospitalisation, of which 123 are in the Western Cape. ICU bed capacity at the province’s largest state hospitals are under severe pressure as the Western Cape nears its peak.

“This is clearly a big challenge,” Ramaphosa said. He added that he was encouraged by a recent visit to KwaZulu-Natal, during which he saw hospitals adding ICU beds to their capacity. “I would like our minister (Mkhize) to focus more on the establishment of those beds… it needs to be ramped up. I would like this to be increased exponentially, we need to increase beyond the 3 500 we have.”

Ramaphosa said he would increase his focus on this aspect of the health crisis. This would “stand us in good stead” for the implementation of the National Health Insurance (NHI) scheme, the president said.

“I wouldn’t say this means the health department is failing. They have achieved phenomenal feats in many ways. We can give them the team, prod them on, and encourage them to do more. That’s why we have allocated R20 billion to enable our health response meeting the challenge of Covid-19.”

Several times during his address the media, Ramaphosa referred to the Covid-19 crisis as an opportunity to build pillars for the implementation of the NHI.