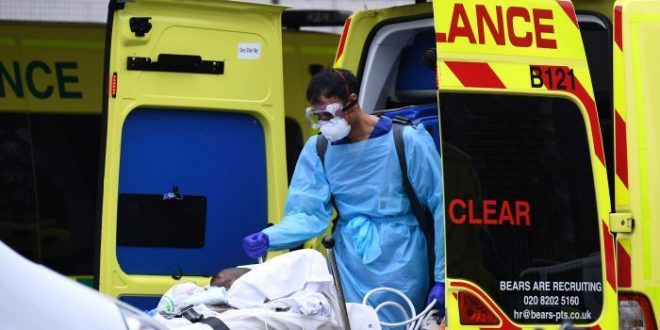 There are fears the coronavirus death toll in the United Kingdom could surpass those in Spain and Italy as the number of UK deaths passes 10,000.

This story will be updated regularly throughout Monday. You can also stay informed with the latest episode of the Coronacast podcast.

The death toll from COVID-19 in the United Kingdom has risen to 10,612 after a recorded daily rise of 737, the Health Ministry said.

The figure reported on Sunday represented a second straight daily decline in number of deaths, although the lower figures may be due to delays related to the Easter weekend.

With the day-to-day death tolls in Italy and Spain on a downward slope, there were growing fears the UK might end up as the country with the most virus deaths in Europe.

However, the pace of new confirmed cases and hospitalisations in the UK appears to be plateauing, a trend officials hope will show up in fewer deaths in the near future.

In some positive news Health Minister Matt Hancock says the NHS has not been overwhelmed and that there are 2,295 spare critical care beds.

“Today marks a sombre day in the impact of this disease as we join the list of countries who have seen more than 10,000 deaths related to coronavirus,” Mr Hancock said.

“At the start of this crisis people said that the NHS would be overwhelmed. And we’ve seen the risk of that elsewhere but not here.”

Almost 200 Aussies flown out of Cambodia

A special Singapore Airlines flight with almost 200 Australians on board has finally left Phnom Penh with passengers desperate to get home, amid a lockdown in Cambodia and neighbouring countries due to the coronavirus.

“The plane has successfully departed Phnom Penh,” a spokesperson for the Australian embassy in Cambodia told AAP.

The embassy said in a statement that 164 Australian citizens, plus 20 permanent residents and family members boarded the flight as regular commercial options “were drying up fast”.

Cambodia has been criticised for its slow response to the coronavirus pandemic, however attitudes have hardened recently and Prime Minister Hun Sen last week cancelled the coming annual Khmer New Year celebrations.

Heavy travel restrictions were also imposed between provinces earlier in the week, which added a sense of urgency for the flight, with Australians living in the countryside told to make a speedy trip to the capital to avoid being locked out of the airport.

Italy has registered 431 deaths, its lowest tally for more than three weeks, with fatalities there running at half the level they were two weeks ago, validating official assertions that the country has passed its peak.

France reported slight falls in the number of dead, and of patients put onto life support.

However Spain, which has the most infections in Europe, saw deaths once again go up, just as Madrid is encouraging non-essential staff to go back to work this week.

Saudi Arabia extended a nationwide curfew until further notice due to coronavirus, after the kingdom reported more than 300 new infections on each of the last five days.

Saudi Arabia placed its capital Riyadh and other big cities under a 24-hour curfew last week, locking down much of the population.

Residents are allowed to leave their houses only for essential needs inside their residential area, elsewhere, the curfew which began on March 23 runs from the hours of 3pm to 6am.

The country has recorded 4,462 infections with 59 deaths, the highest among the six Gulf Arab states where the total surpassed 14,000 with 96 deaths.

The 69-year-old former Celtic, Scotland and Liverpool striker was hospitalised on Wednesday for treatment on gallstones and subsequently tested positive for COVID-19 despite not showing symptoms.

Dalglish won eight league championships and three European Cups across spells as player and manager for Liverpool, while also guiding Blackburn to the Premier League title in 1994-95.

“Thank you for all of your well wishes over the last few days. I’m delighted to be back home with the family after receiving brilliant care from the NHS, which we appreciate now more than ever,” Dalglish said in a statement on Liverpool’s club website.

Dalglish has gone into self-isolation at home and urged the public to do everything possible to slow the spread of the virus.

British Prime Minister Boris Johnson has been discharged from a London hospital where he was treated in intensive care for COVID-19.

Mr Johnson was admitted to St Thomas’ Hospital on April 5 with a persistent fever and cough and was moved to intensive care two days later after his conditions “worsened”.

His condition stabilised after he spent three nights in ICU.

Mr Johnson released a video on Twitter shortly after his release from hospital, saying it was “hard to find words to express my debt”.

“I want to pay my own thanks to the utterly brilliant doctors, leaders in their fields … who took some crucial decisions a few days ago for which I will be grateful for the rest of my life,” Mr Johnson said.

When 97-year-old Brazilian Gina Dal Colleto was hospitalised on April 1 with coronavirus symptoms, few could have thought she would survive the deadly virus.

On Sunday, however, Ms Dal Colleto was pushed in a wheelchair out of Sao Paulo’s Vila Nova Star hospital to applause from doctors and nurses, becoming the oldest known survivor of COVID-19 in Brazil, the Latin American country worst-hit by the outbreak.

Her unexpected recovery was a ray of hope in Brazil, where the coronavirus has laid bare a stretched public health system and exposed fierce political debate over how to best tackle the virus’ spread and prop up the country’s economy.

“Even with almost a century of life, Gina has a very active routine and enjoys walking, shopping and cooking,” the Vila Nova Star hospital said in a statement.

While she was hospitalised, Ms Dal Colleto was put on oxygen and admitted to intensive care, the statement said.

On Saturday, Brazil’s health ministry said 1,124 people had died as a result of the outbreak, with 20,727 confirmed cases.

Air France has confirmed that it had to postpone a flight from the Republic of Congo after the jet was damaged by a bullet.

The incident happened at the airport in Pointe Noire, the country’s second largest city, on Sunday, Air France said in a statement.

An Airbus A330 was damaged and was unable to make a flight repatriating French citizens because of the outbreak of COVID-19.

The flight was postponed for 24 hours so that a replacement plane can arrive to carry out the flight, the airline said.

The person who fired the shot that pierced the sheet metal of the plane was arrested and is being held in custody, according to an airport official.

Previous Boris Johnson discharged from hospital, won’t go back to work right away
Next This is how the world is celebrating Easter during the covid-19 pandemic