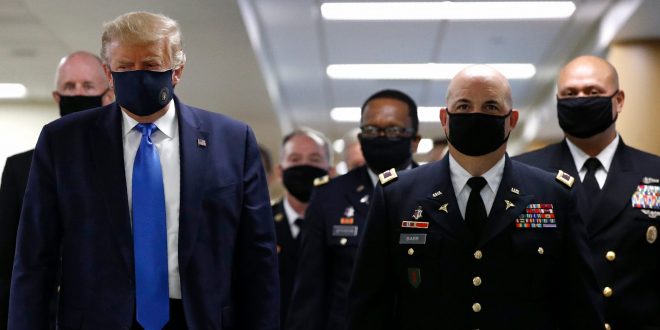 R-0 may be the most important scientific term you’ve never heard of when it comes to stopping the coronavirus pandemic.

The daily U.S. death toll from COVID-19 was rising again and the Vatican on Sunday warned seafaring companies not to take advantage of dedicated workers as the global battle against the pandemic got a new look – President Donald Trump in a mask.

And the re-emergence of pro sports in America stumbled out of the gate when a Major League Soccer game between DC United and Toronto FC was postponed minutes before its Sunday kickoff due to two possibly positive coronavirus test results. Professional football, baseball, hockey and basketball are all in training with games set to begin in coming weeks.

Trump made headlines Saturday by wearing a mask in public for the first time during the coronavirus pandemic, a move that comes days after Texas’ Republican governor said masks were the state’s only hope at avoiding another shutdown as COVID-19 cases skyrocket.

Trump’s hesitation to embrace masks has contributed to a political controversy on the subject that has stunned international health officials as evidence that masks are an effective way to slow the spread of the virus continues to grow.

Meanwhile, deaths in the U.S. have begun to climb after falling for months. Experts had expected the tragic increase, noting that confirmed cases have been spiking across the nation this summer.

📈 Today’s stats: The U.S. has surpassed 3.2 million confirmed cases of COVID-19. Almost 135,000 deaths have been confirmed, according to John Hopkins University data. Globally, there have been 12.7 million cases and over 565,000 deaths.

📰 What we’re reading: Some local governments are instituting fines for ignoring mask mandates. Heath and behavior experts say that makes sense, comparing the fees to traffic tickets: Just as speeding or drinking and driving are dangerous, not wearing a mask during a pandemic is similarly reckless, one said.

Our live blog will be updated throughout the day. For first-in-the-morning updates, sign up for The Daily Briefing.

Major League Soccer’s game between D.C. United and Toronto FC, scheduled for Sunday morning in the MLS is Back Tournament, was postponed just minutes before the scheduled 9 a.m. kickoff.  MLS Deputy Commissioner Mark Abbott said one player on D.C. United tested positive but not a “final positive,” suggesting the results haven’t been confirmed. A Toronto player had an inconclusive test, according to Abbott. The tournament opened Thursday and is scheduled to run through Aug. 11 at the ESPN Wide World of Sports Complex at the Walt Disney World Resort in Florida.

Professional baseball, hockey and basketball players also are training with their teams and are schedule to begin playing games soon. The National Football League’s preseason camps are scheduled to open later this month.

‘Me first’ race for vaccines may have no actual winners

The world’s scientifically turbo-charged, chaotic race to create and then produce coronavirus vaccines has not resulted in widespread collaboration, coordination and sharing. In fact, “me first” vaccine nationalism has pitted nation against nation to get and keep enough doses for their citizens. Countries are focusing on their own vaccine development programs rather than collaborating to pool resources. The United States has largely chosen to go it alone, declining to join international development efforts and instead cutting advance deals worth billions of dollars with pharmaceutical and manufacturing companies for control of hundreds of millions of doses. It’s a risky bet, experts say.

“Many people naively assume it’s the United States that’s going to have (a vaccine) first, because we have several candidates. But that may not be how it goes,” said Amesh Adalja a senior scholar at the Johns Hopkins Center for Health Security.

The Vatican marked “Sea Sunday” by warning shipowners not to take advantage of the maritime workers whose tireless efforts have helped supply food and other necessities during the pandemic. Cardinal Peter Kodwo Appiah Turkson noted that, while many nations completely shut down for months, “the maritime industry continued its operation, adding a multitude of challenges to the already problematic lives of the seafarers, and putting them on the front line in fighting against the coronavirus.” Turkson said many maritime workers have been pressed into extended service, some spending ten months aboard ships without a break.

“Some unscrupulous ship-owners, crewing agencies and managers use the excuse of the pandemic to dismiss their obligations to guarantee their labor rights, including proper wages and the promotion of safe and secure working environments for all them,” the cardinal added.

President Donald Trump visited with wounded soldiers and front-line medical workers Saturday while wearing what – for him – is an unusual accessory: a mask.

“I’ve never been against masks,” the president said, “but I do believe they have a time and a place.”

Trump, who has been criticized by public health officials for not wearing face coverings in public, donned a dark navy blue mask with a gold presidential seal emblazoned on the side during his trip to Walter Reed. Trump in recent days has softened his opposition to wearing masks, a subject on which he has been excoriated by public health officials who say he should set a better example. They said too many Trump followers have followed his no-mask lead, contributing to the spread of the deadly virus.

COVID-19 deaths begin to rise in US

A long-expected upturn in U.S. coronavirus deaths has begun, driven by fatalities in states in the South and West, according to data on the pandemic. The number of deaths per day from the virus had been falling for months, and even remained down as states like Florida and Texas saw explosions in cases and hospitalizations – and reported daily U.S. infections broke records several times in recent days.

Scientists warned it wouldn’t last. A coronavirus death, when it occurs, typically comes several weeks after a person is first infected. And experts predicted states that saw increases in cases and hospitalizations would, at some point, see deaths rise, too. Now that’s happening.

According to an Associated Press analysis of data from Johns Hopkins University, the seven-day rolling average for daily reported deaths in the U.S. has increased from 578 two weeks ago to 664 on July 10 – still well below the heights hit in April. Daily reported deaths increased in 27 states over that time period, but the majority of those states are averaging under 15 new deaths per day. A smaller group of states has been driving the nationwide increase in deaths.

Walt Disney World began a phased reopening Saturday, nearly four months after the theme park shut down.As with other theme parks that have announced reopening plans, park capacity is limited and visitors are undergoing temperature checks and are required to wear face masks.

With COVID-19 cases on the rise in Florida and across the country, Disney is taking it slow. Only the Magic Kingdom and Animal Kingdom reopened Saturday and their combined crowds appeared to be in the 16,000 range. Epcot and Disney Hollywood Studios set to follow on July 15.

Schools should prioritize safety and rely on local authorities in school reopening plans, a joint statement from associations of pediatricians, educators and superintendents says.

“Returning to school is important for the healthy development and well-being of children, but we must pursue re-opening in a way that is safe,” says the statement from The American Academy of Pediatrics, American Federation of Teachers, the National Education Association and The School Superintendents Association. “Science should drive decision-making on safely reopening schools.”

The statement follows a push from Trump to open schools across the nation and amid a nationwide debate over whether children should return to the classroom.

Texas Gov. Greg Abbott begged Texans to mask up in an interview with eastern Texas TV station CBS19, saying face coverings were “the only way” businesses could stay open. “It’s disappointing” that some local officials are refusing to enforce the state’s mask order, Abbott said. “If we do not all join together and unite in this one cause for a short period of time … it will lead to the necessity of having to close Texas back down.”

Abbott’s order effective July 3 requires face masks in public spaces in counties with 20 or more active COVID-19 cases. The order does not apply to people eating, drinking, swimming or exercising or those under 10 years old.

More on the coronavirus from USA TODAY

Where a face mask is required: Many governors are instituting or renewing orders requiring people to wear face coverings in public as cases continue to rise. Is your state on the list? See it here.

Coronavirus Watch: We have a few ways for you to stay informed. Sign up for our daily coronavirus newsletter here, and come together and share the latest information about the coronavirus, coping with lifestyle changes and more by joining our Facebook group.

Where are states on reopening? Some are taking preemptive measures to postpone further phases of their reopening, while others have rolled back their phases to prevent the spread of the coronavirus. See the list.

Previous Bihar logs 1,266 new Covid-19 patients, state’s recovery rate at a high 73.08%
Next A Latino family lost a father to COVID-19. The obituary blamed the ‘carelessness of politicians.’