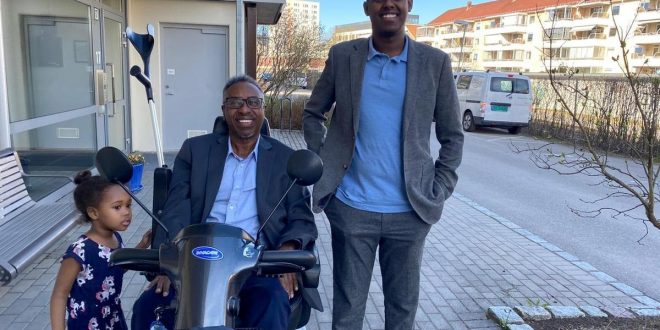 (Reuters) – The first person in Sadad Dakhare’s two-bedroom apartment in Oslo, Norway, to show symptoms was his 4-year-old niece. Next, his mother, his sister and he himself fell ill. Then, about a week after his niece became sick, Dakhare heard his 76-year-old father coughing heavily.

Sadad Dakhare (R), his father Mohamed Dakhare Farah and niece Safa Mohamed Hassan (L) who fell ill with the coronavirus disease (COVID-19) but have now recovered pose in a photo taken in Oslo, Norway April 23, 2020. Picture taken April 23, 2020. Samsam Muhammed Dakhare/Handout via REUTERS. THIS IMAGE HAS BEEN SUPPLIED BY A THIRD PARTY

He found his father lying in bed, gasping for air. “Just call an ambulance,” the father told Dakhare.

At an Oslo hospital, Dakhare’s father tested positive for COVID-19 and was treated for a few days before he was discharged to finish his recovery at home.

The Dakhare family’s story is a familiar one among Somalis in Norway and other Nordic countries, where the pandemic is taking a disproportionate toll on some immigrant groups. Governments in Sweden, Norway and Finland are taking extra steps to try to slow the spread of the disease in these communities.

Across Europe, little is known about who is affected by the virus because governments are releasing limited demographic information about the sick and those who die. But a Reuters examination of government data in three Nordic countries where more details are available shows that some immigrant groups are among those affected at higher rates than the general populace.

In Norway, where 15% of residents were born abroad, 25% who had tested positive for COVID-19 by April 19 were foreign-born. Somalis, with 425 confirmed cases, are the largest immigrant group testing positive, accounting for 6% of all confirmed cases — more than 10 times their share of the population.

Somalis are the most overrepresented immigrant group among Sweden’s confirmed cases, as well. Their 283 positive tests account for about 5% of the nearly 6,000 cases documented between March 13 and April 7. That’s seven times their share of the population. Iraqis, Syrians and Turks also made up disproportionately large shares of positive cases.

In Finland’s capital city of Helsinki, the mayor said it was “worrying” that almost 200 Somalis had tested positive by mid-April. They accounted for about 17% of positive cases — 10 times their share of the city’s population.

More than 100,000 Somalia-born live in the three countries, mostly in Sweden and Norway, one of the largest Somali diasporas in the world. Many arrived as refugees of war in the 1990s, 2000s and 2010s. Several factors place them more at risk of getting sick, public health officials and researchers say.

It is common in all three countries for multiple generations of Somalis to live, like the Dakhares do, in crowded apartments, making it easier for the virus to spread from one family member to the next. They also tend to work in high-contact jobs — healthcare workers, drivers and cleaners, for example — with a higher risk for exposure.

Language barriers also are at play, and some have criticized governments in Sweden and Norway for failing to move fast enough in communicating about the virus to immigrant groups.

“By the time information translated to different languages was spread sufficiently, the infection rate among minority groups was already very high,” said Linda Noor, a social anthropologist who is managing director of Minotenk, a think tank focused on minority-related politics in Norway. She said a lot of information in Norway was distributed through national health authorities’ websites that are unfamiliar to many people in immigrant communities.

Public health officials in both Norway and Sweden pointed to COVID-19 information they published in multiple languages, including Somali, in early to mid-March. But they acknowledged that they did not reach some immigrants fast enough.

GETTING THE WORD OUT

“I think it is clear from the epidemiological situation, especially looking at the high proportion of Somalis with COVID-19, that we did not reach this group in time,” said Hilde Kløvstad, department director at the Norwegian Institute of Public Health.

Once the virus started to spread, officials realized they needed to be more focused in their outreach, she said, adding that the spread of the virus among immigrant communities is slowing.

In Oslo, officials contacted leaders in immigrant communities, who helped them get the word out via social media, word of mouth, posters and online videos targeting Somalis, said Hanne Gjørtz, head of communications for the city. Health alerts in Somali aired on the radio, and text messages with translated information were sent to Somali residents.

“We saw that this led to increased traffic on our websites,” she said.

“But we are constantly learning,” she added. “It would definitely have been an advantage to have videos and posters in place earlier in this crisis. This has been and still is a crisis of great speed, and it took some time for us to find the right ways to reach different groups.”

In Rinkeby-Kista and Spånga-Tensta, two Stockholm boroughs where immigrants and their children make up most of the population, rates of infection are more than two times higher than in the city overall. Trying to slow the spread of the virus in these areas, where Somalis are the biggest minority group, the government is offering temporary furnished rental apartments to at-risk-groups, such as elderly people who live in multi-generational housing, said Benjamin Dousa, chairman of the Rinkeby-Kista district council.

Government workers who speak a variety of languages, including Somali, have hit the streets in immigrant-heavy neighborhoods — near libraries, religious buildings, municipal offices, metro stations and grocery stores — to warn people about COVID-19, said officials from government body Region Stockholm.

In a statement to Reuters, Region Stockholm said it could have been faster in distributing multilingual information before the virus began spreading disproportionately among immigrant groups.

“However, we are working in the middle of a situation which is before unseen,” the statement said. “Therefore, it is difficult to be as fast as is needed and to foresee all needs.”

The statement added that the infection rate is slowing in Spånga-Tensta and Rinkeby-Kista.

Helsinki is gearing up for similar outreach.

“The situation demands enhanced teamwork, continued development of multilingual services and effective targeted communications,” said Mayor Jan Vapaavuori. “We have entered into discussions with the Finnish Somali League about new measures to improve the situation.”

Somalis themselves also are trying to spread the word about how to stay safe.

Sadad Dakhare (R) and his niece Safa Mohamed Hassan who fell ill with the coronavirus disease (COVID-19) but have now recovered pose in this photo taken April 22, 2020 in Oslo, Norway. Picture taken April 22, 2020. Samsam Muhammed Dakhare/Handout via REUTERS THIS IMAGE HAS BEEN SUPPLIED BY A THIRD PARTY.

Ayan Abdulle posted an informational video on Facebook, but she found she wasn’t reaching the people who needed the information most.

Abdulle, 29, who was born in Somalia and came to Norway at age 9, heads a non-governmental organization in the city of Bergen called Arawelo, which usually focuses on helping young immigrants apply for jobs and find friends. After the coronavirus outbreak, Abdulle started to focus on the elderly as well, helping them with grocery shopping. When she spoke with elderly Somali women out shopping last month, she learned they were not getting enough information about the coronavirus because they weren’t using social media and not all of them understood Norwegian.

“In Somali culture, most information is spread by word of mouth,” Abdulle said. “Now we are going from door to door and hanging posters informing people about the symptoms and how dangerous the disease can be.”

Reporting by Lena Masri in London. Editing by Janet Roberts and Ryan McNeill.