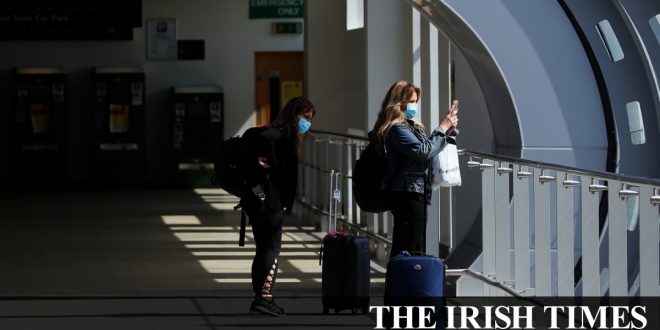 Covid-19: Two-week quarantine period for arrivals into State could be lifted for some

The two-week quarantine period for people arriving into the State from abroad will be lifted for those coming from countries where the coronavirus has been controlled, under plans being considered by the Government.

Taoiseach Leo Varadkar told a private call with Fine Gael councillors earlier this week that he is examining lifting the current restrictions for countries which have a low number of Covid-19 cases and a low rate of reproduction.

The Taoiseach told the call such changes may be made in “months not weeks”.

The current Government advice is for citizens to avoid all non-essential travel overseas and it is also expected this will be changed in line with alterations to quarantine rules to allow Irish citizens holiday abroad.

Countries across Europe are easing their own quarantine rules, or preparing to do so, in order to restart their tourism industries.

It is understood the changes could apply from August or earlier, although there is no clarity on this at present.

A senior Government source said Mr Varadkar stressed the envisaged timetable is “months not weeks”, with everything depending on how the virus develops in the coming weeks.

Mr Varadkar also indicated easing the self-isolation rules for travel from the United Kingdom could be a problem, given its current, relatively higher rate of reproduction and number of cases.

Meanwhile, a further nine people with Covid-19 have died, bringing the death toll in the State to 1,639. The total number of confirmed cases of the virus is now 24,841 following the announcement of 46 new cases on Thursday.

Prof Philip Nolan, chairman of the National Public Health Emergency Team’s (NPHET) Irish epidemiological modelling advisory group, said that according to the most recent indicators the “overall story” is that the disease is stable and declining.

He said the situation was “astonishingly stable” as he credited the “responsible behaviour” of the public.

At the department’s daily evening Covid-19 briefing, senior NPHET officials defended their response to dealing with challenges in the nursing homes sector.

At a meeting of the Dáil’s Covid-19 committee earlier this week, the head of Nursing Homes Ireland, Tadhg Daly, said that key State organisations had left nursing homes and their residents “isolated” during the early stages of the pandemic.

But Dr Kathleen MacLellan, chair of NPHET’s vulnerable people subgroup, said on Thursday: “I think it is very difficult to see how Nursing Homes Ireland can see themselves isolated from the State. There is clear and significant ongoing engagement with Nursing Homes Ireland in what I would say has been a very problem-solving way.

“Every time an issue has come up we have worked with Nursing Homes Ireland to try and resolve that and it is very clear that we have seen the HSE response here.”

Previous Covid-19 lockdown must be eased to avoid Ireland returning to the 1980s
Next Tyson Foods will shut U.S. pork plant as more workers catch COVID-19