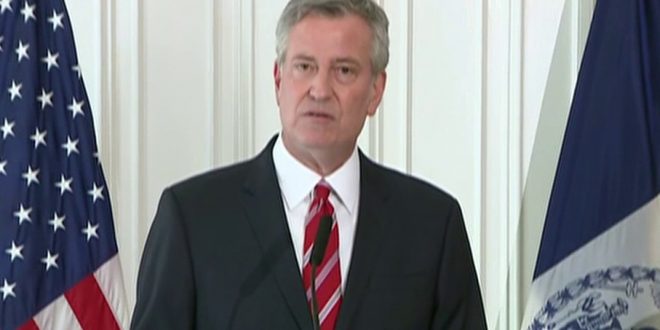 New York City Mayor Bill de Blasio revealed Friday a 75 percent spike in coronavirus hospitalizations since a day earlier but rejected the suggestion that the spread could have been caused by massive protests in the wake of the death of George Floyd.

“I would be surprised if that’s what’s causing it,” de Blasio said Friday of the sustained demonstrations that have broken out in the Big Apple and cities throughout the world. “I think we’re much more likely in the next week [or] 10 days to see a manifestation, if there is one.”

DE BLASIO DROWNED OUT BY BOOS

Still, de Blasio urged all demonstrators to get tested for COVID-19 and warned that protesting is risky during the pandemic.

“It is dangerous to be close together,” de Blasio said Friday at a press conference after another night of protests in the city demanding racial justice and an end to police brutality.

CUOMO SAYS PROTESTERS SHOULD ASSUME THEY HAVE CORONAVIRUS

The number of people admitted to hospitals with suspected cases of COVID-19 jumped from 48 people Thursday to 84 people Friday.

“I don’t like that,” de Blasio said, while adding the numbers are still below the 200-person threshold needed for New York City to stay on track with reopening Monday.

Meanwhile, New York Gov. Andrew Cuomo, who is often at odds with the mayor, on Thursday voiced more concern that protests could be spreading the virus.

“If you were at one of those protests, I would, out of an abundance of caution, assume that you are infected,” Cuomo said Thursday. “One person, one person can infect hundreds if you were at a protest.”

Previous Wear masks in public says WHO, in update of COVID-19 advice
Next India, China will have more COVID-19 cases with more tests, says Trump