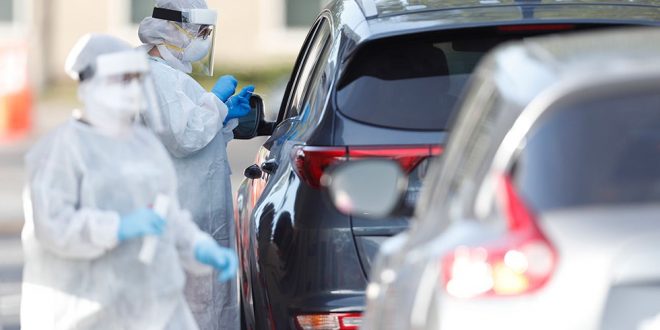 Democrats are increasingly concerned that the country has lost the fight against the novel coronavirus.

For months, beginning in March, public health officials had promoted — and local policymakers had imposed — strict stay-at-home orders and social distancing guidelines that appeared to contain the spread of COVID-19.

But in the last two weeks, as states threw open the doors to their economies and consumers emerged from isolation, the number of cases have sky-rocketed in states around the country, leading to a record daily spike that topped 57,000 for the first time on Friday.

The trend has prompted dire warnings from public health experts that, without a restoration of social restrictions, the United States will miss its last chance to “flatten the curve” and prevent the crisis from spiraling out of control.

A growing number of Democrats contend, however, that without a national strategy from the Trump administration, it’s already too late.

“The country is on fire,” said Rep. Anna Eshoo

Thirty-nine states have seen increased cases in the two weeks leading up to the July Fourth weekend, with Texas, Arizona, Oregon, Georgia, Florida, California and Ohio all seeing large jumps. The tallies bring the total number of cases in the United States to 2.8 million, including more than 129,000 fatalities, according to data tabulated by The New York Times. Both numbers are far and away the highest of any country in the world.

Anthony FauciTrump hits ‘radical left,’ news media, China in Independence Day address White House looks to make ‘we need to live with it’ the new tone on coronavirus: report Rand Paul’s exchange with Fauci was exactly what America needed MORE, the country’s top infectious disease specialist, is attributing the spike to two underlying factors. First, he noted that many states opted to reopen while new cases were at a plateau, versus other countries that remained locked down until they demonstrated sharp reductions in new infections. Second, the U.S. was much more lenient than other countries in allowing for social activities during the virus’s early spread, he said, even in the states that adopted the most stringent measures.

“That allowed the perpetuation of the outbreak that we never did get under very good control,” Fauci, the director of the National Institute of Allergy and Infectious Diseases, told the BBC recently.

Admiral Brett Giroir, a senior administration health official, was blunt about the consequences.

“We are not flattening the curve right now,” Giroir, the assistant secretary for health at the Department of Health and Human Services, told House lawmakers on Thursday. “The curve is still going up.”

“We need a grown up in charge, because in states like mine you don’t have strong courageous leadership. You need that from the White House. And until we have that — and I don’t think we’re going to get that — I’m really, really worried for everyone in our country,” said Rep. Veronica Escobar

“This is terrifying,” she added. “I’m afraid we’re spinning out of control.”

As a sign of the severity of the outbreak in Texas, GOP Gov. Greg Abbot on Thursday issued a mask requirement for anyone in public in hard-hit counties — a remarkable step for a state that was slow to shut down, quick to reopen, and reluctant to impose heavy-handed restrictions on its independent-minded residents.

Pramila JayapalProgressive lawmakers call for conditions on Israel aid Hillicon Valley: Democrats introduce bill banning federal government use of facial recognition tech | House lawmakers roll out legislation to establish national cyber director | Top federal IT official to step down Democratic lawmakers introduce legislation banning government use of facial recognition technologies MORE (D-Wash.), who represents hard-hit Seattle, said the absence of federal standards has created a real-life “Hunger Games” scenario, pitting states against each other in desperate efforts to obtain medical supplies, preserve crucial space in hospitals and devise their own strategies for dealing with the surge in cases. Trump, she said, is largely to blame.

“He’s been detrimental to our efforts to contain the virus, and so states are on their own,” Jayapal said. “The blood is on the hands of this president in terms of lack of leadership on all of these issues.”

Amerish (Ami) Babulal BeraKaren Bass’s star rises after leading police reform push The Hill’s Coronavirus Report: Kansas City Mayor Quinton Lucas says country needs to rethink what ‘policing’ means; US cases surpass 2 million with no end to pandemic in sight Exclusive investigation on the coronavirus pandemic: Where was Congress? MORE (D-Calif.) warns that the worst may be yet to come. An internist by training, Bera pointed to studies suggesting that a protein mutation has created a new strain of the virus that, if not more lethal, appears to be more contagious. That, combined with the sheer number of new cases, will make it only tougher to contain the spread of COVID-19 in the weeks and months ahead.

“Whereas in April the numbers were still manageable, [it’s] much harder to mitigate things right now,” he said. “I think the public really needs to understand that fall and winter may be much worse than what we’re seeing right now, especially when people are going indoors and the flu is circulating.

As he has throughout the pandemic, Trump last week continued to send inconsistent, mixed messages to the American public about the coronavirus. After months of downplaying the effectiveness of face coverings, he told Fox Business he’s “all for masks” even as he refuses to wear one in public. Trump also said he hoped the virus would “sort of just disappear” and that the U.S. would find a vaccine “very soon.”

Justin AmashMichigan candidate’s daughter urges people not to vote for him in viral tweet Can Trump break his 46 percent ceiling? NFL to close offices for Juneteenth, making it an official league holiday MORE, who flirted with running against Trump as a Libertarian, suggested the president’s slight change of heart on masks is simply a reaction to his cratering poll numbers as voters increasingly disapprove of his handling of the coronavirus. A Hill-HarrisX poll found that 57 percent of registered voters disapprove of Trump’s management of the crisis, compared to just 43 percent who approve.

“I think he’s probably panicking a little,” Amash, sporting a mask, told The Hill. “I do not think he thinks that much about other people; he’s panicking about his election.”

With COVID-19 cases flaring back up around the country, lawmakers are engaging in a healthy dose of Monday morning quarterbacking.

Richard (Rick) Ray LarsenRepublicans stand by Esper after public break with Trump House GOP lawmaker breaks with party to back proxy voting House passes massive T coronavirus relief package MORE (D-Wash.), whose hard-hit state had appeared to get control of the coronavirus only to see its numbers climb in recent days, suggested the patchwork strategy by states — in lieu of a robust response from the Trump administration — was doomed from the start.

“We should have never attacked this virus state by state. It should have been done at the federal level. This is a culmination of non-decisions going back to January,” a frustrated Larsen said through his mask.

“I know the best thing to do no matter what is to wear your frickin’ mask, stay six feet away if you can, and cut down on your travel. All the answers are irrelevant if you don’t wear your mask and social distance.”

But even lawmakers in the Capitol can’t agree on the simple issue of wearing masks. Minutes after Larsen descended the Capitol steps, conservative Rep. Ted Yoho

A large-animal veterinarian, Yoho argued that, while keeping the economy open would have resulted in more positive cases, the virus would have been weakened, making it less deadly, and lent the population greater “herd immunity.”

“Originally, I didn’t think we should have gone down the road” of closing the economy, said Yoho, a Freedom Caucus member. “But we have, and what I think they should do now is open it up but tell people who are vulnerable, comorbidity, elderly, overweight … you need to take precautions.

“The sooner we get back to a normal lifestyle, the faster we’ll recover from this.”

Despite beach closures in place, Yoho’s home state of Florida recorded more than 11,000 COVID-19 cases for the first time Friday, bringing its total number of cases to more than 190,000. Some 3,700 people have died in the Sunshine State, whose GOP governor, former Rep. Ron DeSantis

Yet Democrats are warning that no economic recovery is possible without first eliminating the threat to public health by diminishing the virus’s spread. Unless that happens, they say, the state reopenings are bound to backfire by forcing another round of closures.

Some lawmakers said the country has already reached that point.

“We have to go back to staying home, quarantining, masks, and businesses are going to have to shut down again,” Jayapal said. “Because we can’t afford this kind of spread of virus.”

Previous Record 24,850 Covid-19 cases in single day in India
Next Colleges are racing to create ‘a new sense of normalcy.’ Will new rules, COVID-19 testing be enough?