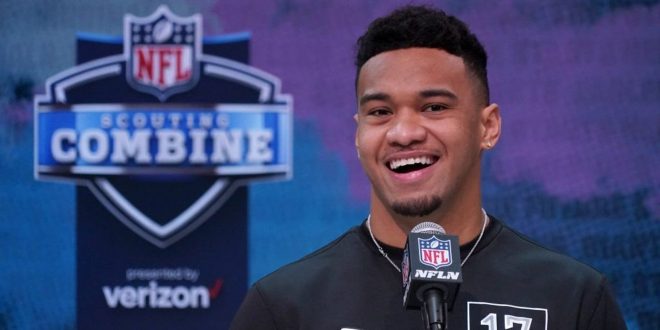 Alabama quarterback Tua Tagovailoa speaks to the media at the NFL combine on Tuesday, Feb. 25, 2020, in Indianapolis.

INDIANAPOLIS — He was humble and modest and charming, and when Tua Tagovailoa finished his 21-minute media session at the NFL combine Tuesday, he walked off the dais and behind a curtained hallway with only the smallest hitch in his step.

The former Alabama quarterback’s health promises to be the biggest storyline for the next two months leading up to the April 23 NFL draft.

Tua — as everyone knows him — fractured and dislocated his right hip in a November game against Mississippi State and has yet to resume football activities.

He said he expects to be cleared “to do everything” when he meets with his doctors March 9. He has a personal pro day scheduled for April 9 and he’ll likely be asked back for a medical recheck in mid-April.

Until then, the Detroit Lions and a handful of other teams will await updates on his health with bated breath.

General manager Bob Quinn declined to share his evaluation of Tagovailoa as a prospect Tuesday, but whether he truly will consider him for the No. 3 pick is irrelevant.

The Lions hold the most valuable draft chip they’ve had in a decade, and they need Tagovailoa healthy to get full return on its worth.

“I think the value of the No. 3 pick is always very high,” Quinn said. “It doesn’t matter what the prospect is or what the year is. I mean, it’s always going to be, year to year, five or six guys that are just like really, really top prospects that anybody (picking) from No. 7 through No. 20 would love to have.

“It’s just all about the cost, right? It’s all about what would they give up to get there.”

Jeff Okudah is one of the best cornerback prospects in recent memory, and Derrick Brown has drawn comparisons to Ndamukong Suh as a defensive tackle.

But no team is giving up a franchise-altering package of picks or players to take an interior lineman or make a cornerback the No. 3 pick.

Teams might not give that up for Tagovailoa, either. There are legitimate questions about his injury history — he also had two ankle surgeries during his time at Alabama — his size (6-foot-1), and even him being left-handed.

But he also plays football’s premier position, and he does it well and with a face-of-the-franchise appeal.

Take his media session Tuesday, when Tagovailoa regaled a crowd of reporters with the story of how his dad taught him to throw left-handed even though he does nearly everything else with his right.

Asked about his most NFL-ready attribute, he said earnestly: “You guys are making me talk about myself. It’s making me feel uncomfortable up here. I’m not too sure, honestly.”

If not for questions about his health, Tagovailoa would be in play for the No. 1 pick. He has the right combination of arm strength, anticipation and seasoning, and he starred in college football’s most respected program for arguably the game’s best coach.

As it stands, LSU quarterback Joe Burrow likely will be the No. 1 pick, but Tagovailoa wanted nothing to do with debating why he should go ahead of Burrow.

“That’s a good question,” he said. “I’m not one to talk about myself too much, but if you want me to talk about the other guy … He’s a fierce competitor. He’s really good. As you can see, he’s broken a lot of records and he’s done a great job this past season.”

But do not mistake Tagovailoa’s modesty for a lack of confidence.

He was bold and convincing when talking about his health Tuesday, even after admitting to being the last prospect left at the hospital after a nearly 10-hour exam. He said his doctors have assured him he’ll be back to the player he was before the hip injury.

“And I’m confident (in that, too),” Tagovailoa said.

Quinn and the Lions’ doctors will form their own opinions on that.

The team’s physicians must first decide how big a risk Tagovailoa’s hip and ankles present. Quinn, with input from his scouts and coach Matt Patricia, then will decide whether his talent is worthy of the No. 3 pick, given the team’s other needs and the presence of incumbent Matthew Stafford.

Tagovailoa said he’s willing to sit behind a veteran like Stafford if that’s what his future team wants, though if all checks out with his health, it might not come to that.

Detroit Lions coach Matt Patricia speaks to the media during the NFL combine on Tuesday, Feb. 25, 2020, in Indianapolis.