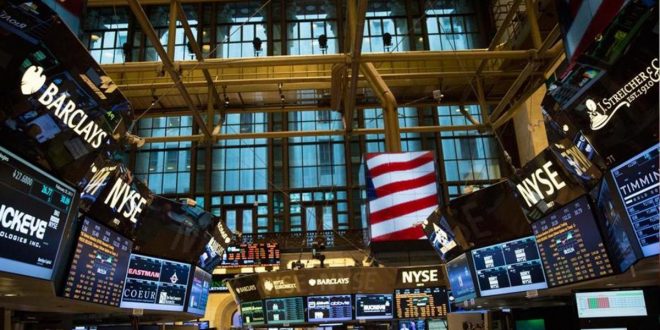 Wall Street’s historic rout looks set to continue Friday, with futures prices pointing to extended declines for the three major benchmarks amid the worst week for world stocks since the financial crisis, as investors prepare for what could be a global coronavirus pandemic.

Asia stocks were pummeled in overnight trading, following on from last night’s sell-off on Wall Street that hived more than 1,000 points from the Dow Jones Industrial Average for the second time this week, pulling the MSCI World stock benchmark closer to correction territory, wiping out more than $5 trillion in equity value and setting up its worst five-day run since November 2008.

More than 83,000 people — mostly in China but in rising numbers around the world — have been infected by the respiratory virus, officially known as COVID 19, with new cases confirmed overnight in Nigeria, New Zealand and Lithuania.

“This virus has pandemic potential,” World Health Organization Director General Tedros Adhanom Ghebreyesu said Thursday. “This is not a time for fear. This is a time for taking action to prevent infection and save lives now.”

With an unknown lethality and a rising infection rate, COVID 19’s impact on the global economy is unknown at this stage, but with U.S. equity valuations recently trading at their highest levels since 2002, investors are in little mood to speculate on the ultimate outcome of any pandemic.

U.S. equity futures, in fact, suggest another session of deep declines on Wall Street Friday, with contracts tied to the Dow Jones Industrial Average priced for a 830 point slide, taking the five-day total to around 4000 points, and those linked to the S&P 500 poised for a 102 point retreat.

The S&P 500, in fact, suffered its fastest “correction” — where stocks fall from 10% from a recent peak — on record as of yesterday when the benchmark closed under the 3,000 point mark after hitting an all-time high on February 19. Nasdaq futures suggest a 300 point opening bell decline.

Benchmark 10-year U.S. Treasury bond yields, meanwhile, fell to a fresh all-time low of 1.15% mark in early European trading, extending a decline that has clipped more than 70 basis points from one of the world’s most liquid financial instruments since the beginning of the year. Two-year notes, meanwhile, traded below the 1% mark for the first time on record, a move that was shortly followed by a similar level for 5-year notes.

With bond yields tumbling, pressure continues to mount on the Federal Reserve — and indeed other central banks around the world — to respond with either rate cuts or targeted monetary support.

Chicago Fed President Charles Evans, however, told a financial conference in Mexico Thursday that it would be “premature” to talk about central bank action in the wake of COVID 19’s spread, and repeated the Fed’s stance of “closely monitoring” developments in the global economy.

CME Group futures, however, now suggest at least a 77% chance of a March rate cut, compared to just 9% only a week ago, and are fully pricing in further cuts between now and the end of the year.

European stocks opened notably weaker in Frankfurt, London and Milan, with the Stoxx 600 benchmark tumbling 3% by mid-day of trading, while the FTSE 100 slumped 3% to the lowest levels since 2016 in London.

Germany’s DAX index, which has fallen 15% from its recent highs, was marked 3.8% lower by mid-morning trade in Frankfurt.

In Italy, where the number of coronavirus cases has risen to 655 — from just 3 a week ago — with at least 17 deaths, the benchmark FTSE MIB index fell 3.4% in early dealing in Milan.

Global oil prices, too, extended declines amid their worst five-day stretch in four years, taking Brent crude some 15% lower on the week as investors adjusted demand forecasts from both China and other major economies around the world.

Brent crude futures contracts for April delivery, the global benchmark, were last see seen $2.1 lower from their Thursday close in New York and trading at $50.08 per barrel, while WTI contracts for the same month were seen $2.07 lower at $45.02 per barrel.