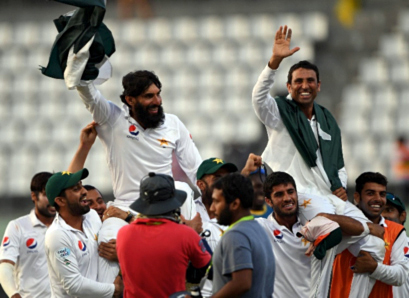 Two Pakistan stalwarts, Misbah-ul Haq and Younis Khan carried Pakistan through the hardest years. They scored more than 3,000 runs batting together at an average of 68+

The month of May 2017 has been a sad one for international sports supporters as they witnessed four of the greatest sporting legends walk onto the pitch for the very last time for their respective teams in football and cricket.

All four ended their careers on a high, in great style:

These four great legends didn’t only serve their countries and teams with pride and dignity but also their respective sports, and everybody who has been a fan. All four played their hearts out.

Younis Khan Bows Out of Cricket

The 39-year old began his cricket career in 2000, playing against Sri Lanka and scoring a century. He is the first Pakistani batsman to join the 10,000 test runs elite club. He also has the most centuries by a Pakistani to his name, and he was managed to score a century against every test-playing nation.

It’s being a roller-coaster ride for Khan, from leading the Pakistan team in 2009 to a T20 World Cup trophy to being accused of match fixing, and banned for life in 2010 by the Pakistan Cricket Board (PCB) that accused him of infighting. Replacing a player of his caliber will prove to be impossible. He goes down as one of the greatest batsmen ever.

Whenever things go hard for me or the team, I love to become the man who comes in and takes everything on his chest. Younis Khan

Known as Tuk-tuk for his defensive batting due to Pakistan’s unstable batting order, and having to come in to bat early to consolidate, and Mr. Dependable for his calmness and scoring runs when needed the most in crucial times as captain, Misbah-ul Haq will be missed on the pitch.

Almost every cricketer that has gone on to become a legend, started their journey in their teenage years. But Misbah was a late bloomer as he only begun to be recognized in his thirties, in about 2007 in the T20 World Cup where he was Pakistan’s leading run scorer. He became a key figure in 2010 at the age of 36.

A cricket career is like your life, it can’t be smooth. There are failures and success and you learn from it. Mishah-ul Haq

With captaincy came success. In his seven years as captain, he achieved the highest winning percentage (45) by any Pakistan captain, as well as the most wins by a Pakistan captain (26 from 56 matches). Under his captaincy, Pakistan achieved:

Despite being called Tuk-tuk Misbah holds the record for the fastest 50 in test history and he is the seventh Pakistani to reach 5,000 test runs. His absence is bound to hurt Pakistan.

They have won 39 trophies between them for club and country: two of the most remarkable and decorated football players of the past decade – the finest midfielder and right back of their generation, Phillip Lahm and Xabi Alonso. It was an emotional farewell for the duo at the Allianz Arena. The pair were honored before the game against SC Freiburg. Fans unveiling banners and praising the two club legends.

It was an emotional farewell for the duo at the Allianz Arena on May 20. The pair were honored before the game against SC Freiburg, with fans unveiling banners and praising the two club legends.

But unfortunately, he goes down as the most underrated reliable world class defender!

As he was substituted at the weekend, Lahm fought back the tears. walking off to a standing ovation from everyone in the Allianz Arena.

Xabi Alonso, on the other hand, was at times has been criticized for sometimes making rash tackles, as well as his tendency to lose his composure and pick up unnecessary cards for hard fouls he committed.

The Spaniard was highly praised for his brilliant long-range passes, creativity, and hard work in the middle of the park. A “dead-ball” specialist, he didn’t score many goals but when he did they were almost all screamers. He leaves with more than 700 club appearances, 127 champion league games, 114 Spanish caps, and 17 major trophies under his belt. He played a crucial role in Spain winning, the 2010 FIFA world cup and was part of the great Liverpool Football Club and Real Madrid squads that won the Champion League in 2004-05 and 2013-14.

In all the big three teams (Liverpool, Real Madrid, and Bayern Munich) he enjoyed his football with a lot of success, being instrumental in these team’s successes. He was Spanish Player of the Year in 2003 at Real Sociedad, and La Liga’s best midfielder in 2012.

All four legends, Misbah-ul Haq, Younis Kahn, Phillip Lahm, and Xabi Alonso have made their mark and served their clubs and nations well. Memorable careers to be celebrated and talked about in years to come. They will be missed.