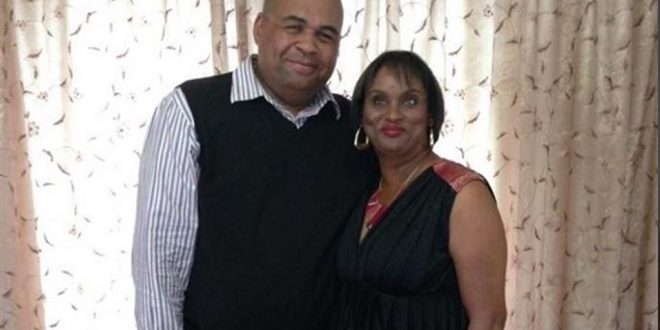 A Cape Town teenager lost both her parents to Covid-19 on one day. But as she herself recovers from the virus, which claimed their lives, she says a part of her is content.

“I couldn’t see my mommy and daddy without each other,” Amy Volkwijn, 19, told News24. “I am glad that even though they are gone, they are still together.”

Barry, 48, a driver at Alexandra Psychiatric Hospital, died in the early hours of the morning. Heidi, 43, a respected motivational speaker and manager of services for youth and adults at the League of Friends for the Blind, died in the afternoon.

Amy, who is in isolation, said she was still coming to terms with losing both her parents.

On Friday, the day before their deaths, was their 21st wedding anniversary. Both had been comatose and on ventilators.

The family had started displaying flu-like symptoms less than three weeks ago.

Barry had been hospitalised by 10 June as he had been struggling to breathe.

As she sat next to her father when the ambulance arrived that day, Amy said she did not realise it would be the last time she would see him.

“They said all he would need was a few hours on the oxygen machine,” she recalled.

Instead, he was put on a ventilator after failing to respond to treatment. Amy’s aunt, Berenice Sias, said she could not speculate on how the family could have contracted the virus, adding Barry particularly was extra cautious, undressing at the door of their Retreat home and sanitising even “up to his head”.

Heidi and Amy were tested that same week. By Friday, Heidi, too, had been admitted to the Constantiaberg Mediclinic, also battling to breathe.

Amy said she would phone up to three times a day for an update on her parents’ condition.

During her last conversation with her mother that Sunday, Heidi explained to her which bills to pay and from which accounts, Amy said, laughing.

“And she told me to continue praying for my dad because he wasn’t doing too well. We hoped that we would all make it through this. As hard as it was, we had to have faith and hope.

“After that, my mommy was put on a ventilator. We didn’t speak again.”

Sias, who had not seen her sister in the last three months in compliance with the lockdown, said Barry’s body had started shutting down as his condition worsened by the day.

After his death, she had the hard task of breaking the news to Amy.

“I spent the day with her. While I was there, the hospital called. They said that they don’t allow visitors in the Covid ICU, but that they would allow her in. I asked if I could accompany her as she wouldn’t want to go alone.”

That afternoon, the aunt and niece, dressed in full personal protective equipment were allowed to speak and pray for a comatose Heidi while holding her hand at her bedside.

Amy said her mother’s face had been swollen and she “looked bad”.

“She didn’t know about my daddy. I told her she needs to come back home. I asked her to continue fighting because now that daddy is gone, I need her to be here for me.”

Heidi, who had diabetes, died shortly after they left.

A joint funeral will be held for the couple next Saturday. Barry and Heidi Volkwijn, who both died of Covid-19 on Saturday.

The pair had met while working at the League of Friends of the Blind.

Heidi had lost her sight when she was 17.

Barry, whom she met after losing her sight, did not care that she could not see, Sias said.

“There was never a time where that was an issue. He dressed her, took her shopping, chose what looked good on her. Luckily, he was a stylish guy with good taste.

“Even when we took photos, he would always make sure she was the one who looked good,” Sias joked.

“He became her eyes. He was her eyes.”

Their love story came to an end with them still together, Sias mused.

“He was one of a kind, a man set aside for her by God. They fit each other so beautifully. How they loved and cared for each other…”

‘My plan is to make them proud’

Sias said she would miss her sister’s positive energy.

“She had a tenacious spirit within her – nothing would get her down. [Losing her sight] was a terrible journey she walked through, but once she put her mind on moving forward, she did. She was driven.”

And Heidi could never sit still, always involved in some community project or attending a social or church event, she added.

“She was always giving of herself. She could put sighted people to shame, because you can see, but what are you doing with your life? She was just a dynamic person.”

Amy, a student, hopes to one day make her parents’ dream come true by obtaining her degree in teaching.

“My plan is to make them proud. They put so much effort into getting me where I am.”

She said she was hoping to be retested and reunited with her extended family by the end of the week as she needed them as she was still reeling from her loss.

“I said my farewell to my mommy, but I feel like my daddy went too fast. I didn’t make peace with that yet,” she admitted.

“I still need some time to process everything.”

Previous Fandango adds new features to highlight health precautions and distancing in movie theaters
Next Coronavirus pandemic: Updates from around the world