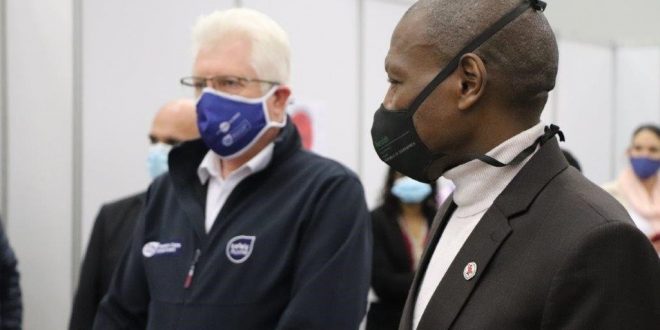 The department said this week that 2 309 critical care beds allocated to Covid-19 patients nationally, and more than 13 000 field hospital beds were added to the total capacity during the lockdown.

It remains unclear whether these field hospital beds will be equipped to handle patients in need of critical care.

“Critical care” includes high care and ICU beds, according to the department’s own definition.

As of 1 June, 193 Covid-19 patients were in ICU, 92 were on ventilators, 92 were in critical care and 1 531 were admitted to general wards, health department spokesperson Popo Maja told News24 this week.

INFOGRAPHICS | The first 90 days of Covid-19: How does SA compare to the world?

As of 3 June, according to a response received from the health department, there were 2 719 high care and ICU (critical care) beds in the public sector nationally,  and 7 676 overall, of which 4 957 beds are in the private sector.

“Both the public and private sectors have been asked to double their critical bed capacity,” Maja said.

According to a presentation to Parliament by then acting director-general at the department, Dr Anban Pillay, on 10 April, there were 2 512 critical care beds available in the public sector.

In other words, after subtracting the number of critical care beds available nearly two months ago from the number available now, only 207 beds have been added.

But the number of beds Pillay quoted on 10 April appears to be from an outdated database compiled in 2013.

Health Minister Zweli Mkhize has repeatedly said that a key objective of the lockdown instituted on 27 March was to push back the date of peak Covid-19 infections to buy valuable time for health systems to prepare for an expected surge in coronavirus cases.

But confusing statements, apparently outdated data in early presentations and a lack of coherent responses to queries makes any comparison difficult.

It raises questions about whether there will be sufficient critical care beds to treat the estimated 5% of coronavirus patients who may fall severely ill, and whether the Department of Health made any significant progress to boost existing bed capacities during the hard lockdown period.

However, an analysis of the numbers, amid concerns over data accuracy, shows that little to no progress appears to have been made in acquiring more critical care beds during the lockdown.

News24 studied health officials’ presentations to Parliament, interviewed an industry expert and obtained updated numbers from the health department and compared this to the estimated demand for critical care beds and ventilators as calculated by a team of government modellers, as well as mooted plans by the department.

Asked how many “ICU” beds were added to existing capacity during the lockdown, Maja said 2 309 “critical care” beds, and 12 129 “additional field beds”, were added.

It also appears that the figures quoted to Parliament on 10 April, are actually figures from 2013.

This is because they reflect figures contained in a 2013 market research study by Professor Alex van den Heever, a public health policy expert.

Maja denied this on Thursday, saying the 10 April figures were collected from the District Health Information System (DHIS) – which would mean that the figures in the DHIS as of April 2020, matched exactly the numbers collated by Van den Heever in 2013.

News24 has studied a database by Van den Heever which shows that the figures he reported in 2013 match exactly the figures given to Parliament by Pillay on 10 April.

This makes it unclear if the new figure from 1 June (2 719) merely reflects an updated count of existing beds, or if any real beds were added during the lockdown.

Van den Heever said this week that the figure of 2 309 likely included the available critical care beds in both the public and private sectors, making it even less clear how many real beds had been converted from existing beds to critical care ones in the public sector.

Maja told News24 on Wednesday that just over 13 000 field hospital beds, and slightly more than 35 000 quarantine beds have, however, been procured and installed across the country.

It is not clear whether these beds will be used to treat severely ill Covid-19 patients.

Some confusion also exists over the department’s definition of critical care, high care and ICU beds, which seems to have changed over time.

In the past, the three kinds of hospitalisation have been used by the department as individual categories, but in its response on Wednesday it said that critical care now denotes high care and ICU.

On 10 April, Pillay informed Parliament that, nationally, beds capable of treating severely ill Covid-19 patients (critical care beds) numbered 7 188, consisting of 2 512 in the public sector and 4 976 in the private sector. South Africa appears to be on track to meet the most pessimistic projections from modellers, who said in mid-May that there could be anywhere between 12 million and 13 million Covid-19 cases by the time the pandemic peaks in about September.

The South African Covid-19 Modelling Consortium (SACMC) predicted that there would be 30 000 cases by the end of May. As of 1 June, the number of cases were 34 357.

The projections said the demand for critical care, or ICU beds, could range from 25 000 to 35 000 over time and existing ICU beds could quickly be overwhelmed, possibly by early July.

President Cyril Ramaphosa, during an engagement with the South African National Editors’ Forum last week, quoted a figure of 20 000 ICU beds that were needed to meet the expected demand.

Asked what measures had been taken by the group to increase capacity for Covid-19, he said: “This differs amongst our various facilities, dependent on their locations and the rate of infections within these areas. Each hospital has a plan in terms of how it would utilise its facilities in the most efficient manner in order to provide the most appropriate care to as many people as possible.”

Van Loggerenberg also said more ventilators had been ordered and that a “capacity forum” had been formed.

Mediclinic South Africa has about 1 000 ICU/high care beds and about 850 ventilators, according to chief clinic officer, Dr Stefan Smuts.

“Given that there are a number of factors involved in increasing ICU care capacity, which includes potential infrastructural changes, accessing of ventilators amongst others, effort at this stage has been placed into re-purposing existing care spaces to better facilitate Covid-19 treatment through the different phases of the pandemic,” he said.

Maja said this week that the total number of ventilators available in the public sector was 207. He said that 300 ventilators were procured by the department during the lockdown and a further 1 000 were donated, of which 50 had been received. This is likely from a 1 000-unit donation from the US Agency for International Development.

This means that after nearly two months, just 350 additional ventilators have been added to the public health system.

The health department estimated in April that the country would need at least 7 000 by the pandemic’s peak in September.

In the presentation to Parliament on 10 April, Pillay said the country had 3 216 ventilators across the public and private sectors. 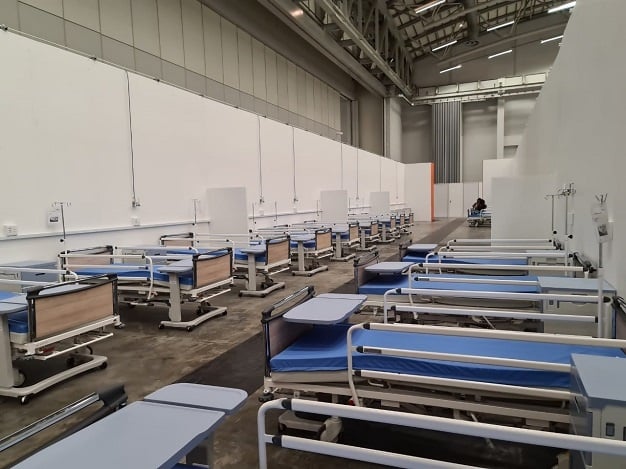 Beds are being moved into the CTICC as it prepares to assist in the Covid-19 fight. (Photo: Murray Williams, News24)

Maja cited “critical challenges” in their ability to procure ventilators as a result of supplier stock shortages stemming from the surge requirements of countries in the Northern Hemisphere.

Trade, Industry and Competition Minister Ebrahim Patel told the media last Friday that the target was to build 20 000 ventilators by August, with three manufacturers having been chosen. However, manufacturing had not started, he said.

By 27 April, when the department next accounted to Parliament, 27 people were on ventilators. In the next month, it jumped to 65. As of Monday, 92 patients were ventilated.