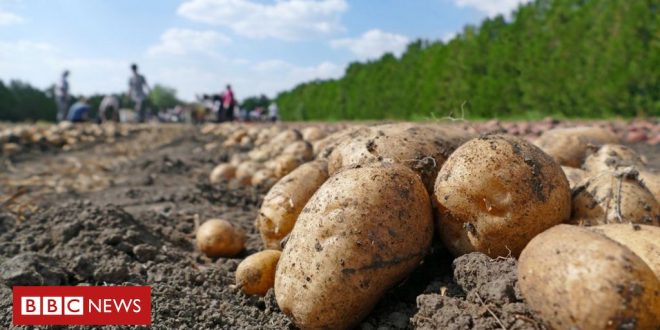 Farm locked down as 73 staff are Covid-19 positive

About 200 key workers on a farm are isolating after 73 people tested positive for Covid-19.

The cases have been found among the workforce of vegetable producers A S Green and Co, based in Mathon in Herefordshire.

Workers are being asked to remain on the farm during a period of isolation, while Herefordshire Council arranges food and essential supplies for them.

The firm is also being supported by Public Health England (PHE).

Workers, who carry out picking and packing work during the harvesting season, live in mobile homes on the farm, near Malvern, in Worcestershire.

The company said the welfare of its staff was its “priority” and further testing of management and visitors to the farm had so far produced negative test results.

From 29 June to 5 July, Herefordshire had an average rate of two new coronavirus cases per 100,000 people, figures from Public Health England show. This compares with Leicester, which had 116 cases per 100,000.

As a precaution, workers at AS Green and Co were being treated as “one extended bubble” and were staying within household groups on the farm, the council said.

Workers were also being encouraged to wash their hands regularly and use face coverings in closed areas.

“Despite these measures, a small number of workers became symptomatic earlier this week and they and a few close contacts among the workforce were tested initially and found to be positive,” she said.

Karen Wright, director of public health for Herefordshire, said: “Prompt testing on the farm has allowed us to understand transmission and control the spread of infection.

“We continue to support the farm management, their workers, who form an important part of our local economy, and the local community through this challenging time.”

A spokesperson for AS Green added: “Our staff are our priority, they are hard-working key workers helping us provide food for the country during these unusual times.”

In a statement on its website, the company said: “Public Health England advises that it is very unlikely Covid-19 can be transmitted through food or food packaging, so shoppers can remain confident buying British fruit and veg.”

The site is currently closed to visitors.

Overall, the Herefordshire council area has recorded 749 cases during lockdown, as of 7 July.

What do I need to know about the coronavirus?