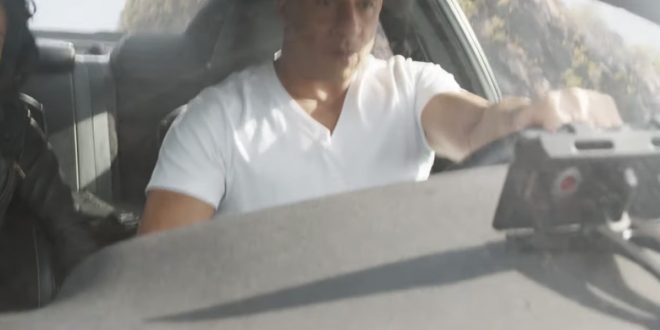 The Fast and the Furious franchise is one full of improbability, a place where the laws of physics, science, and logic are thrown aside in favor of the inexorable powers of things like muscle cars, nitrous, and “family.” But the newly released trailer for F9 (the official name for the ninth Fast and Furious movie) may have just revealed the most fantastical thing of all: it appears to take place in a world where the failed RED Hydrogen One phone is a hit, with multiple characters appearing to use the phone in the upcoming film.

Both Dominic Toretto (Vin Diesel) and the newly returned Han Lue (Sung Kang) are seen driving vehicles in the trailer using RED’s $1,200 smartphone mounted to their dashboards (presumably as GPS units). And make no mistake, it’s definitely RED’s phone, down to the giant logo, unused pogo pin receptacles for the expansion modules that never arrived, and the lackluster camera whose hyped “4V” (RED’s brand for stereoscopic 3D) images never really took off.

Obviously, the product placement here is sadly too late for the doomed phone — F9 began shooting in June 2019, back when RED was still selling its smartphone and even announcing plans for the since-canned Hydrogen Two. By the time RED canceled the entire Hydrogen phone project in October, it was already too late: most of the film was shot, leaving the Hydrogen One trapped in cinematic amber even as it imploded.

In a way, it’s sort of fitting that Dom and the gang would be using the Hydrogen One, a phone whose every facet was designed to be as bombastic and extreme as possible. If the Fast and Furious saga was distilled into a phone, it would probably look something like the Hydrogen One, all sharp edged and aggressively testosterone fueled.

There’s only one brief shot of the actual display of the phone in the trailer, which appears to be showing some sort of radar system — not exactly a standard feature on the real-world Android phone. But, if nothing else, the titanium-framed model could probably serve as a blunt weapon in one of the series’ signature set pieces.

F9 hits theaters on May 22nd, 2020. It’s unclear yet the extent to which the RED Hydrogen One will factor into the plot.