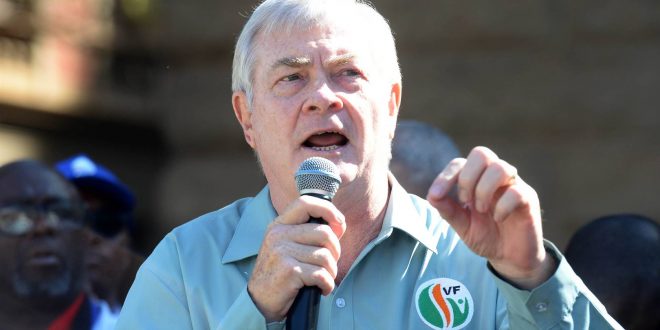 FF Plus also heading to court to end lockdown

The Freedom Front (FF) Plus intends to take an urgent application to the Gauteng High Court in Pretoria to challenge the validity of the National Disaster Management Act and to request a finding that the government is abusing the Act, which will mean that the announced state of disaster and the associated regulations are unconstitutional.

According to party leader Pieter Groenewald, the balance of public interest between curbing the spread of the virus and unlocking the economy to prevent the loss of livelihoods, and subsequently lives, should come into play.

“At present, it is not taken into account with the draconian regulations imposed on the country,” Groenewald said on Thursday.

“The lockdown and the associated regulations have already served their purpose to flatten the curve of the infection rate to allow healthcare services enough time to prepare for a possible large outbreak of Covid-19.

“President Cyril Ramaphosa, the government’s own head healthcare advisor, Professor Salim Abdool Karim, and the Minister of Health, Zweli Mkhize, have all repeatedly stated that we have already reaped the benefits of the lockdown,” said Groenewald.

On Thursday, the DA also said it was taking the government to court in two separate matters that challenge the validity of some aspects of the national lockdown, including the military-enforced night curfew, the ban on e-commerce and the restriction on exercise hours, News24 reported.

“It is our opinion – and it is the view of many South Africans – that all three of these decisions should be immediately reversed, as there are no rational justifications for a military-enforced curfew, a restriction on e-commerce business and a limited three-hour window for exercise,” DA interim leader John Steenhuisen said.

The party will also file court papers challenging the constitutionality of having no parliamentary oversight inscribed in the Disaster Management Act.

Groenewald said the lockdown cannot be extended in an attempt to prevent the spread of the virus from reaching its peak in certain areas.

“It is bound to happen and with the winter months at our door, unlocking the country cannot be postponed any further. The FF Plus recognises that the virus poses a real threat to many human lives, but if a country’s economy comes to a complete standstill, it will, without a doubt, also result in great loss of lives, severe poverty and suffering.”

According to Groenewald, it has always been of the utmost importance to strike a balance between limiting the spread of the virus and unlocking the country’s economy. Waiting another two weeks before moving to Level 3 will seriously disturb that delicate balance, the FF Plus leader said.

“The chances that continued restrictions will do a lot more damage to the economy and ordinary citizens’ livelihood are much greater than the chances of it limiting the rate of infection any further.”

Groenewald says that the government is “abusing its powers” by invoking the National Disaster Management Act instead of the State of Emergency Act “seeing as a state of emergency may only be implemented for three weeks and all regulations require Parliament’s approval and oversight”, which entails the involvement of all represented political parties.

“Even the secretary-general of the United Nations (UN), Antonio Guterres, has indicated that South Africa is one of the countries that is abusing the lockdown to violate the rights of its citizens,” Groenewald asserted.

In April, the UN Human Rights Office raised concerns about the use of excessive force in several countries, including South Africa, as governments enforce lockdowns in a bid to stop the spread of Covid-19, News24 reported.

“The FF Plus will request the court to rule that all business enterprises will be allowed to become fully operational and trade on condition that they have the relevant health and safety measures in place to curb the spread of the virus.

“The party’s application will also request the court to ask the government to provide its reasons for imposing such stringent regulations and the reasons for why these regulations are still in place even though they have already achieved their primary objective,” Groenewald said.

He added that the government should also disclose the data on which the state of disaster is based and explain the reasoning behind how the timelines for the various levels of lockdown are determined. The reasons for the delay in the official announcement of regulations, which are in many cases unclear and without any schedule, must also be provided.

“Therefore, the FF Plus will urgently approach the court to address these matters. The government’s abuse of power must not be tolerated,” he said.

Previous The COVID-19 misinformation crisis is just beginning, but there is hope
Next Canadian Forces members test positive for COVID-19