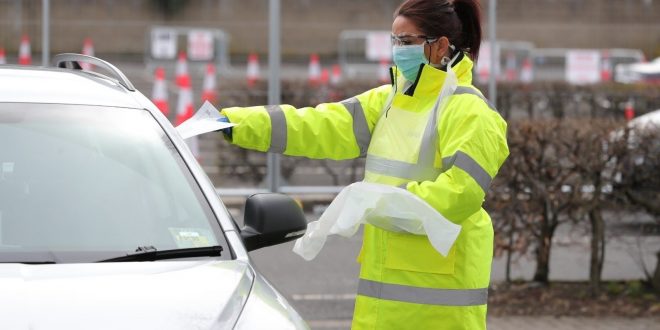 Around 100 health workers were at tested for Covid-19 at the first NHS staff testing centre in Belfast.

The facility at the SSE Arena opened yesterday and complements testing being carried out by Health and Social Care Trusts in Northern Ireland.

It is part of the UK-wide NHS initiative on staff testing in which Randox and Deloitte are key partners.

Kits to test for coronavirus being used on the SSE site are made by Randox Laboratories.

The company has manufacturing facilities both sides of the border in Antrim and Donegal, and employs around 1,500 people around the world.

The British government is already engaged with the company as part of its national testing plan, with the possibility of ordering millions of kits.

The first batch of testing started at this site 5 days after similar NHS centres opened in England, while health workers are already being tested in Scotland and Wales.

Currently, 5 drive through lanes are set up in the car park of the sports and entertainment arena, but more lanes could be added if needed in the coming weeks.

Like other drive through facilities set up across the island, health workers can drive in and get swabbed without having to get out of their cars.

Testing at the site is for healthcare workers only and by appointment.

The service is free for staff and aims to help end uncertainty of whether NHS staff need to stay at home.

Those who test negative will be able to return to work. 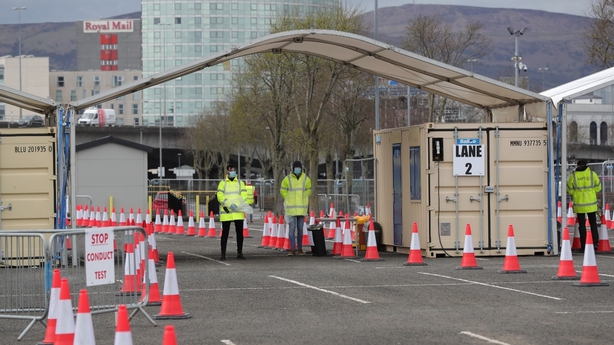 The Belfast Trust had reported it was down 10% of its workforce due to Covid-19 precautions and staff self isolating, but full data is not yet available across Northern Ireland.

A number of MOT centres, similar to the NCT centres south of the border that were closed after car testing was suspended over faulty car lifts, have been offered up to transform into Covid-19 testing centres.

The first of these is opening on the Balmoral Road in Belfast later this week.

“The centre at the moment is centred on Health Care workers, but we are going to open up a number of test centres and the Health Minister Robin Swann is bringing a testing plan and details of that to the Executive tomorrow.”

Ms Mallon said she hopes testing will be expanded but they have to work through a priority list first.

“Our first priority is around our Health Care workers, but I would be keen to see that we roll that out to all essential workers and also that we have community testing,” she added.