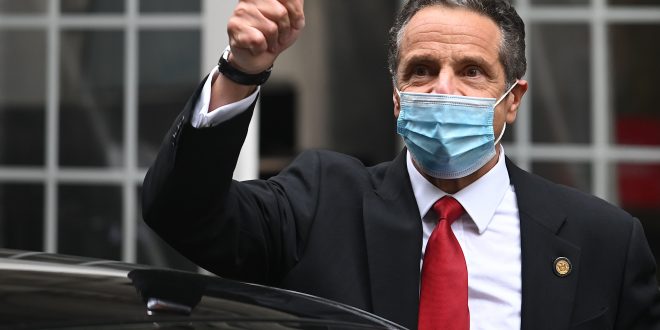 New York Gov. Andrew Cuomo urged people excited about the reopening of New York City to remain smart and vigilant in their social distancing practices to guard against a potential spike in the number of positive Covid-19 cases.

“New Yorkers bent the curve by being smart. We’re celebrating. We’re back. We’re reopening. We’re excited. Our mojo’s back. Our energy’s back. Great. Stay smart,” Cuomo said at a news briefing Monday.

He said New York is continuing its decline while other states that reopened earlier are beginning to see spikes in the number of positive cases.

“Look at facts around us. Other states, the spike is going up,” he said pointing to a graph of new reported cases in California, Florida, Texas and Arizona. “That is the cautionary tale, my friends.”

He added that New York is doing more tests than any other state in the country and any country on the globe on a per capita basis.

“Why are we reopening? Because these numbers say we can. There’s no guess. There’s no ideology. Based on the numbers, we can reopen,” he said.

Monday marks the 100th day since New York confirmed its first coronavirus case, according to Cuomo. The governor congratulated residents for surviving the “worst situation in the nation, frankly one of the worst situations on the globe, to not only flattening the curve but bending the curve.”

The state reported 42 deaths related to Covid-19 on Thursday, marking the lowest daily death toll in eight weeks. The number of hospitalizations and the number of lives lost from the virus have been on a slow, steady decline from the height of the outbreak in late March and early April when close to 800 people were dying every day, according to state data.

Cuomo attributed the recovery to New Yorkers’ “pure function of behavior” and said the state’s reopening guidelines will only work if New Yorkers follow them.

“We know that it works if it’s followed. So the same guidelines apply to New York City and if we follow those guidelines in New York City, there should not be a spike, just like there hasn’t been a spike across the rest of the state,” he said. “If we change our behavior, if we revert, if we get sloppy, if we get cocky, if we get a little arrogant, then we’d have a problem.”

Cuomo said the state will keep a special eye on New York City and plans to perform 35,000 tests per day in the city alone to closely monitor the reopening there. Health officials will react immediately if they see any increase in the infection rate.

The governor also urged all protesters in the city to get tested. The state is covering the costs of the tests and prioritizing 15 testing sites across New York City for people who have participated in recent protests, Cuomo said.

He announced last week that New York would be expanding its testing facilities to demonstrators. Cuomo said the nationwide protests over the police killing of George Floyd drew about 20,000 people in New York City alone and 30,000 across the state.

Previous London records NO new COVID deaths as defiant Hancock declares ‘we ARE winning the battle’
Next Testing cruise passengers for COVID-19 would be ‘overkill’: NSW Health