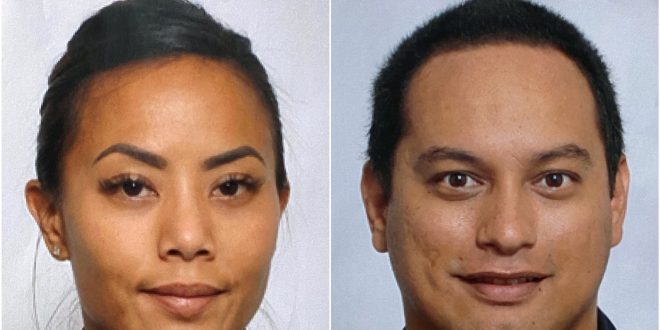 This undated photo provided by the Honolulu Police Department shows Officers Tiffany Enriquez (left) and Kaulike Kalama. They were killed Sunday while responding to a call.

This undated photo provided by the Honolulu Police Department shows Officers Tiffany Enriquez (left) and Kaulike Kalama. They were killed Sunday while responding to a call.

Investigators in Honolulu are combing through the charred rubble of seven homes and searching for the remains of a man who police say stabbed his landlord, fatally shot two officers and set a fire that destroyed his bungalow and six other homes.

“It will likely take days to process the crime scene, including recovery of any remains,” Honolulu Police Chief Susan Ballard said at a press briefing. “At this time there are three people who are unaccounted for, including the suspect.”

Prior to the rampage, the suspect’s landlord had tried to have him evicted. Jaroslav “Jerry” Hanel stabbed his landlord, whom authorities identified as Lois Cain, on Sunday morning, Ballard said. Cain was wounded in the leg but managed to dial 911, and responding officers arrived at the scene.

“Shortly after, they saw thick black smoke coming out of the home,” Ballard said.

The fire engulfed the homes at one end of Waikiki Beach — and may have claimed the lives of two women at the bungalow whom authorities have not yet located.

Honolulu police gather near the scene of a shooting near Diamond Head State Monument on Sunday.

Honolulu police gather near the scene of a shooting near Diamond Head State Monument on Sunday.

“They were like my kids,” Ballard said on Sunday, choking back tears. “I know each one of them very personally.”

Both Enriquez, a seven-year veteran of the police force, and Kalama, who had served for nine years, were parents. Authorities say their deaths are the first line-of-duty police killings in Honolulu since 2012.

In an emotional press conference just minutes ago, Honolulu Police Chief Susan Ballard confirmed the identities of the two officers who were killed in the line of duty on Sunday morning as Tiffany Enriquez and Kaulike Kalama. httpss://t.co/KmOtzzCFXh pic.twitter.com/b3rnnJbYCw

As state and federal investigators piece together evidence, local leaders say the whole city is in a state of mourning.

“This is a family and people are grieving,” said Honolulu Mayor Kirk Caldwell. “Every day, men and women in blue get up in the morning and put on their uniforms and go to work.”

While Hanel, 69, is presumed to have died in the fire, Ballard said, “We will continue to search for Hanel until we confirm that his remains are recovered.”

It wasn’t clear whether the two missing women also were tenants or what their relationship was to Hanel. Ballard would not identify the women or confirm their ages, saying only that investigators are sifting through the crime scene now that the fire has been fully extinguished.

Defense lawyer Jonathan Burge said that Hanel, whom he has represented, is a native of the Czech Republic who lived at home for free in exchange for handyman work. But local authorities say Hanel had repeated run-ins with police. Hanel had an upcoming court hearing on charges that he made a false 911 call.

Burge told The Associated Press that Hanel was “kind of a quirky guy and had problems,” believing that the government was surveilling him. But it may have been the pending eviction proceeding that allegedly set him off.

Police have not yet recovered any weapons from the crime scene, and Ballard said Hanel did not have a permit to own any guns.

“As we express our condolences to their families, friends and colleagues, let us also come together to help and support those who have been forever changed by this tragedy,” Gov. David Ige of Hawaii said on Twitter.