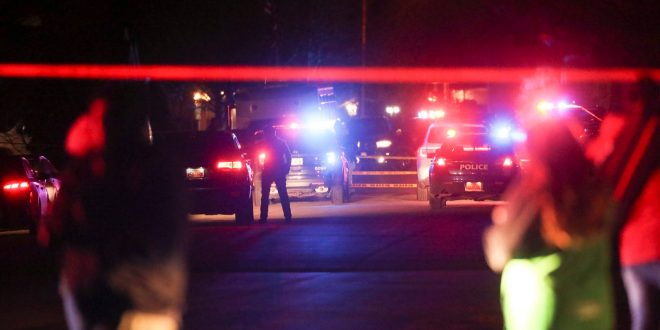 ‘Hug your loved ones tight’: Teen arrested after 4 killed in Utah home

Authorities in Utah were trying to determine Sunday why a teenage boy fatally shot a woman and three children in their home, leaving a small community overwhelmed by shock and grief.

All the victims were related, Grantsville Police Cpl. Rhonda Fields said, adding that  investigators were sorting out the relationships between all those involved. The teen faces aggravated homicide and other charges, she said.

“As for motive, we don’t have any of that,” Fields said.

“Parents and grandparents, secure your firearms!” Herbert said in a statement. “Everyone, hug your loved ones tight. And remember love, not hate, will heal broken individuals and families.”

Grantsville is a city of 10,000 about 30 miles west of Salt Lake City. Mayor Brent Marshall’s job usually involves promoting the Children’s Sociable and warning residents not to leave cars in the park during snowstorms.

This weekend Marshall was speaking for a community in mourning.

“It’s a tragic event anytime something of this nature happens. It affects the community; it doesn’t matter if it’s a small city or a big city,” Marshall told The Salt Lake Tribune. “People know each other and that has an emotional effect on everybody.”

Neighbor Laurie Bahe said she knew the family for 10 years, describing them as happy and outgoing.

“I pray for the family that it happened to and the people that survived that are going to have a really difficult time with it,” Bahe told ksl.com. “They were a really, really nice family. It’s just shocking that it happened.”

Patty Deakin-Daley, the administrator of the community Facebook page Tooele County 411, started an online fundraising effort that names the family. It says that the mother and her three minor children were killed, her husband wounded.

“The family now has to pay the very expensive funeral and medical expenses related to this tragedy,” Deakin-Daley said in the post. “There will be many expenses that will come up including having the home cleaned, repaired and made to feel like a home again.”

The Tooele School District said its crisis team would provide counseling services to students when school reopens on Tuesday after the Martin Luther King Jr. holiday.

We are deeply saddened and shocked to hear of the events that occurred,” the district said in a statement. “We want to express our sincere condolences to those who have been impacted by this tragic situation. It is important that we stand together to care for and support each other through this difficult time.”

Jason Killian, with The Church of Jesus Christ of Latter-day Saints, said the church was “devastated and deeply saddened” by the tragedy.

“We love this family, and will support them and the rest of our small community as we mourn together,” Killian said. “We pray for this family and each member of our close community and invite any who may be struggling to reach out to us for spiritual counseling.”

Previous 80 soldiers killed by Iran-backed Houthi rebels in Yemen
Next House impeachment manager to Trump: If Ukraine call was ‘perfect’ then ‘call the witnesses’