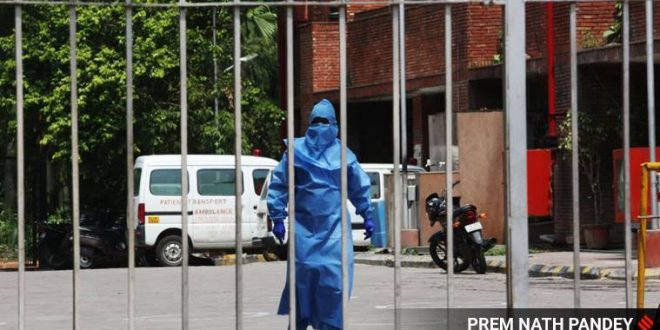 India had already overtook Spain’s coronavirus case tally to become the country with the fifth worst-hit country in the world. (Express Photo by Prem Nath Pandey)

India Coronavirus Updates, June 8: After remaining closed for nearly two and a half months during the nationwide lockdown, shopping malls, restaurants and religious places are set to open on Monday in most parts of the country barring Maharashtra and Goa. In addition to coming up with their lists of dos and don’ts for the people, authorities have ensured that these placed have been sanitised and provisions for adherence to social distancing and other protocols being made.

Meanwhile, the total number of coronavirus cases in the country rose to 2,56,611 while the death toll crossed 7,000. India had already overtook Spain’s coronavirus case tally to become the country with the fifth worst-hit country in the world, lagging behind US, Brazil, Russia and the UK. Follow Coronavirus India LIVE Updates

Delhi Lieutenant Governor Anil Baijal Monday directed the departments and agencies to “not deny” treatment to non-residents of the city, effectively striking down the AAP government’s decision on reservation of hospital beds taken on Sunday.

In an order, issued in his capacity as the chairperson of the Delhi Disaster Management Authority (DDMA), Baijal pointed out that the Supreme Court has time and again upheld the right to health as an integral part of “Right to Life” under the Indian Constitution.

Delhi Chief Minister Arvind Kejriwal has self-isolated himself after developing mild fever and sore throat, an AAP spokesperson said on Monday. Kejriwal is also likely to undergo Covid-19 test since he is showing these symptoms, the party spokesperson added.

“CM is a little unwell. He has developed mild fever and a sore throat. So he has self-isolated himself. Since Sunday afternoon, he has not received any guest or official. He is likely to undergo Covid-19 test,” the party functionary said.

The number of coronavirus cases in the national capital crossed the 28,000-mark, with 1,282 fresh infections while the death toll climbed to 812, a health bulletin issued by the Delhi government said. According to the health bulletin, the total number of Covid-19 cases in Delhi rose to 28,936 with 1,282 fresh cases. A total of 51 fatalities were reported on June 6, the bulletin said, adding that these lives were lost between May 8 and June 5.

Principal Director General of Press Information Bureau (PIB) KS Dhatwalia tested positive for coronavirus and was admitted to AIIMS in New Delhi, news agency PTI reported. The National Media Centre, where his office is located, has been closed and will remain shut on Monday and Tuesday for sanitisation of the building and contact tracing, official sources said. Dhatwalia had shared the stage with Union Ministers Narendra Singh Tomar and Prakash Javadekar on Wednesday.

In the last two weeks, 79 government doctors have tested positive for COVID in Hyderabad, said a Resident Doctors Association. The latest was from Nizam’s Institute of Medical Sciences (NIMS), where four doctors and three paramedics tested positive on Saturday.

Healthcare workers at top government medical colleges and hospitals blame the government for exposing them to the coronavirus by not testing enough. Telangana government’s daily bulletins do not talk about the samples tested on the day or to date. The total number of COVID cases from Telangana stood at 3496 as of Sunday.

The number of Covid-19 cases in UP increased to 10,536, with as many as 2,500 cases being reported since the easing of lockdown restrictions in the state. (Express Photo by Praveen Khanna)

The number of Covid-19 cases in Uttar Pradesh increased to 10,536, with as many as 2,500 cases being reported since the easing of lockdown restrictions in the state. The death toll in the state rose from 222 to 275, with Sunday recording seven more deaths. The fatality rate stood at 2.6% — one of the lowest among the severely infected states in the country. The government reiterated that it would further ramp up testing and efforts are being made to reduce the time between sample recovery and test results.

More than 1,000 cases added in West Bengal in record 2 days

West Bengal recorded its fastest increase in 1,000 Covid-19 cases on Sunday, reaching the 8,000-mark in a span of two days, even as 13 more people died of the disease. The state health department reported the highest single-day surge in cases for the third straight day, with 449 people testing positive for the infection.

State officials had last month warned that a surge in cases would occur because of the return of migrant labourers from other states. However, among all these states, the percentage increase since the beginning of the month has been the highest in West Bengal, which has recorded a 49% rise in cases, followed by Tamil Nadu (42%), and Delhi (39%).

Lockdown restrictions will be further lifted in the state from today with restaurants, hotels and shopping malls set to reopen. Besides, all private offices will be allowed to function from Monday. With the establishments opening their doors to the public, the owners will adopt a slew of safety measures to reduce the spread of Covid infection. Shopping malls will only allow those wearing masks. People will be asked to maintain a distance of six feet from each other, while elderly persons, children and pregnant women are being advised not to visit malls.

Sanitizing and cleaning in progress at Elante the biggest Mall of the city at Industrial Area phase 1 after Chanidgarh admin ordered to open malls from Monday onwards in the UT. (Express Photo by Kamleshwar Singh)

Private offices in Mumbai opened on Monday with 10 per cent strength, if required, with the remaining employees working from home, as part of the Maharashtra government’s ‘Mission Begin Again’.

Mumbai Traffic Police have prepared for a surge in vehicular traffic on roads considering the state’s phased easing of the lockdown. While some companies have made arrangements for sanitisers and disposable face masks for their employees, there are others still taking a guarded approach to opening up.

Markets to open in orange zones in Jammu and Kashmir

All the districts in Kashmir except for Ganderbal and Bandipora have been categorized as red zones. (Express Photo by Shuaib Masoodi)

All places of worship in Jammu and Kashmir, including the Mata Vaishno Devi shrine in Trikuta hills near Katra, will remain closed for pilgrims in Jammu and Kashmir, with the administration on Sunday categorising the entire Union Territory — barring Doda and Kishtwar districts — as red and orange zones.

While all educational institutions, training and coaching institutions including anganwadi centres, will remain closed, online/distant learning will be permitted and their offices can continue to function for administrative purposes. Cinema halls, gymnasiums, swimming pools, entertainment parks, spas, theatres, bars, auditoriums, assembly halls and similar places will also remain closed in the UT. However, liquor shops will reopen across the UT.

Also reopening are all private hospitals, clinics and nursing homes (including OPD services), e-commerce and courier services, all agriculture, horticulture, animal husbandry and related activities; home deliveries by restaurants and hotels; banking and financial services as well as self-employed service providers like plumbers, technicians and electricians. Canteens/eateries at bus stands, railway stations and airports will also open, but only with passes in red districts. Additionally, in orange zones, all shops in market areas, bazaars and market complexes will be permitted to open.

Government offices reopen in Kerala, most places of worship tomorrow

All government, quasi-government and PSU offices in Kerala are set to reopen on Monday, even as the number of Covid-19 cases in the state continues to increase.

An order issued by the state government Sunday said offices, except those in containment zones, should function with full staff strength starting Monday. In containment zones, offices will function with minimum staff. The government has directed that staff members taking care of elderly parents, children aged below 5 years and those who are differently-abled should avoid contact with the general public. Places of worship, meanwhile, will reopen Tuesday, maintaining social distancing.