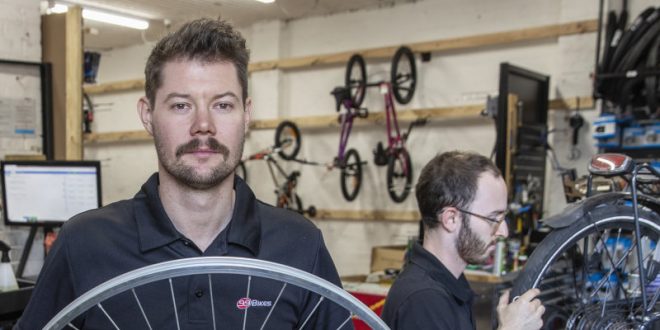 Inside the virus bicycle boom

At 99 Bikes in Bondi Junction, queues have been snaking out the door over the past few weeks.

The queues are thanks in part to physical distancing rules, but it’s also because the COVID-19 lockdown has everyone going gaga for cycling as they look for new ways to get active or alternatives to public transport.

Matt Turner, son of travel entrepreneur Graham “Skroo” Turner and managing director of Pedal Group, the company behind 99 Bikes, says there has been a huge uptick in business, especially over the last four weeks.

“There’s been about a 50 per cent increase across our stores, but in our city stores it would be more, so around inner Sydney, inner Melbourne, inner Brisbane,” he said.

99 Bikes has 47 stores across the country and is jointly-owned by Flight Centre, the Turner family and employees.

The company has employed about an extra 50 staff to cope with the increased demand. Of those, about half were Flight Centre staff who had been stood down.

Mr Turner said there was strong demand across a mix of products, especially for bikes under $1200 through to trainers, which had all sold out.

“It’s been challenging from a supply perspective and a people perspective. But generally I think the guys in the store are loving the extra attention from more customers and getting more people onto bikes, which is obviously why we exist.”

All 99 Bikes stores were practising physical distancing and limiting the number of customers in the store at any one time. (Most states are still allowing people to cycle with the people they live with or one other person, but check any social distancing requirements as they can vary from state to state.)

Mr Turner believes the cycling surge is being driven by three reasons: transport, health and exercise and family activities.

“Essentially, it’s the easiest way to keep your social distance and get exercise at the same time,” he said.

Mr Hore said fewer cars on the road also meant it was a lot safer for cyclists at the moment.

Alexander Miller, spokesman for the Bicycle Network, said data collected a few weeks ago had indicated an increase of cyclists on key commuter routes.

“We think it’s a good thing to go out and ride a bike and make sure you’re getting that physical activity every day, at least 30 minutes, because it’s really important for physical and mental health.”

Mr Turner said it was hard to know if the surge in demand would sustain, but the company was planning “as if it will be”.

We know what a metre and a half is now… so it’s obvious now we can all give each 1.5 metres safely – even on the road.

“We don’t want to miss out on that extra demand. Worst case is we end up with too much product of the things that are in demand now,” he said.

Mr Hore hopes it will lead to more cyclists on the road, as well as an appreciation of social distancing between cyclists and motorists.

“We know what a metre and a half is now… so it’s obvious now we can all give each 1.5 metres safely – even on the road,” he said.

Natasha Boddy is Work & Careers reporter with The Australian Financial Review. She was previously a homepage editor and online producer. Connect with Natasha on Twitter. Email Natasha at natasha.boddy@afr.com