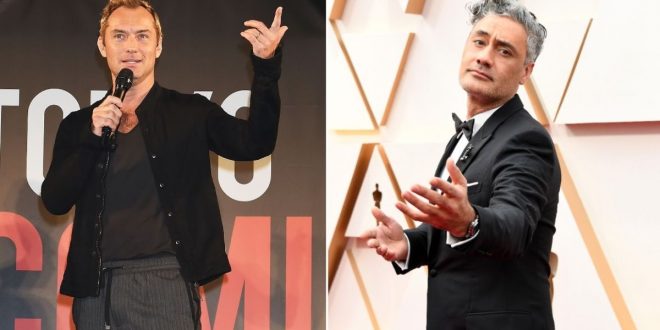 Stepping up to really give a stern, “Hey, what’s your problem, bud?” to those beloved and widely well-regarded Hollywood figures that they pretty much also already are, Jude Law and Taika Waititi are reportedly teaming up for a new satirical TV series about life in Hollywood. Per Deadline, the prospective show is titled The Auteur, which sounds like a real takedown of the entertainment industry’s nigh-constant tendency to fixate on the artistic contributions of a single human being—writer-director-producer-generally-beloved-man-about-town Taika Waititi, for instance—and then just sort of run that near-sighted adoration into the ground. Law would reportedly star in the title role, with the plan, at present, being to shop the series to Showtime.

Waititi—whose recent rise in stature has been powered, in part, by the same mystique he’s purportedly hoping to skewer here—is one of the busiest people in Hollywood at the moment; his docket currently includes the upcoming fourth Thor movie, his ongoing efforts to avoid Disney’s attempts to rope him into directing a Star Wars movie, the Akira remake that’s never going to happen, and also, of course, finding the proper place to stow his Jojo Rabbit Oscar. Law has been slightly less frantic of late, but he’s still a regular fixture in all sorts of TV shows, films, and more, having recently come off his mostly-coma-acting-based (but still very impressive) stint on Paolo Sorrentino’s The New Pope.

So far, Showtime’s not commenting on its involvement in the series, which Waititi is reportedly also expected to direct. And really, we have to ask ourselves: Is there anything this guy can’t do?! We really need a word for these kinds of entertainment polymaths capable of conjuring projects into existence through nothing short of pure force of will and hard-won genius and oh, wait, no, sorry, we just noticed we were doing it again. Our bad! We’ll try to cut that out.