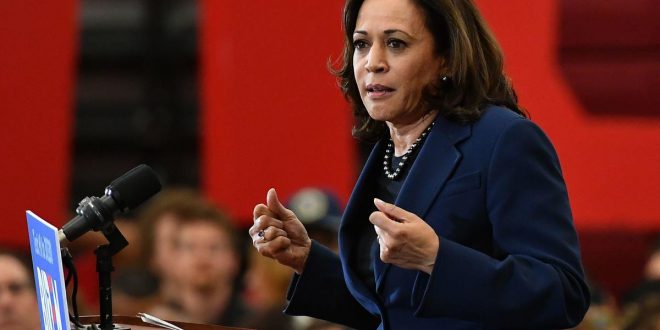 Senator Kamala Harris, of California, is joining former primary opponent Senator Bernie Sanders, of Vermont, and Senator Ed Markey, of Massachusetts, in trying to provide an additional monthly income boost to Americans who make under $120,000 a year, as they face financial pressures during the coronavirus pandemic. The trio introduced new legislation Friday that would provide every individual with an annual income under $120,000 with $2,000 per month until the COVID-19 crisis is over.

Children and other dependents can also be recipients of the proposed tax rebate program. It would retroactively pay recipients from March 2020 until three months after the secretary of health and human services determines that the public health emergency has ended.

“The CARES Act gave Americans an important one-time payment, but it’s clear that wasn’t nearly enough to meet the needs of this historic crisis.” Harris said in a statement. “The Monthly Economic Crisis Support Act will ensure families have the resources they need to make ends meet. I am eager to continue working with Senators Sanders and Markey as we push to pass this bill immediately.”

According to the proposed legislation, every U.S. resident who meets the income threshold would obtain the payment, regardless of whether or not he or she has filed a tax return.  The bill also forbids debt collectors from seizing rebate payments. Homeless individuals and foster youth would also receive payments through this bill.

In a statement Sanders said, “If we can bail out large corporations, we can make sure that everyone in this country has enough income to pay for the basic necessities of life.”

“Providing recurring monthly payments is the most direct and efficient mechanism for delivering economic relief to those most vulnerable in this crisis, particularly low-income families, immigrant communities, and our gig and service workers,” Markey said. “I am proud to join Senators Sanders and Harris in calling for recurring direct cash.”

This is one of several COVID-19 related proposals Harris has introduced while she’s been rumored to be a potential vice presidential pick for presumptive Democratic presidential nominee Joe Biden. She’s been tied lately to other progressive favorites besides Sanders and Markey, too. Earlier this week, Harris joined Congresswoman Ayanna Pressley, Democrat of Massachusetts, in introducing The Saving Our Street Act legislation, aimed at ensuring that businesses that have fewer than 10 employees receive grants of up to $250,000. Last week, Congressoman Alexandria Ocasio-Cortez introduced Harris’ Pandemic Disaster Assistance Act.

During an interview with MSNBC Thursday, Harris did not answer when she was asked if she is currently being vetted to join the ticket with Biden.

“I’m not going to talk about any personal conversations.” Harris said during the interview. “As I’ve said before, I’d be honored to serve with Joe Biden if asked.”