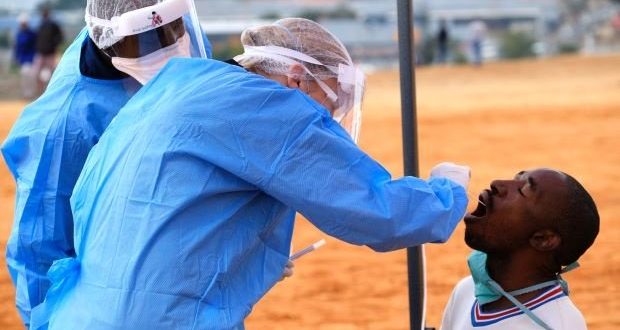 Government interventions, including the travel ban and lockdown, have potentially averted at least 20 000 deaths, says a top scientist.

Professor Tulio de Oliviera, a bioinformatician and director of the KwaZulu-Natal Research and Innovation Sequencing Platform (Krisp) at the University of KwaZulu-Natal, said the basic reproductive number of the infection had also slowed from three to one in most of the country.

De Oliveira and his team at Krisp have provided real time data analysis of the Covid-19 infection to the government.

He said South Africa had followed the UK trajectory in the early days of the epidemic, but early intervention by the government had seen the two countries charting different paths.

Had they stayed on the same trajectory, De Oliveira estimated at least 20 000 people would have died.

Crucially, he said, the “reproduction number” over time in South Africa, represented as R(t) by epidemiologists, had decreased to about one.

“Rt” is like “R0” – the basic reproduction number indicating how many new cases are generated by each infected person – but over time.

The “satisfactory” number that scientists hoped for was for R(t) to be 0.7, De Oliveira said.

Professor Cheryl Cohen, co-head of the Centre for Respiratory Diseases and Meningitis at the National Institute for Communicable Diseases (NICD), said the desire was always for R to be below one.

Asked whether the R(t) was informing the government’s response to lifting the lockdown, Cohen said this was not the only factor. Neither, she added, was the infection rate.

1. That transmission is controlled.

2. Health system capacities are in place to detect, test, isolate and treat every case and trace every contact.

3. That outbreak risks are minimal in special settings like health facilities and nursing homes.

4. That preventative measures are in place in workplaces, schools and other places where people need to go.

5. That importation risks can be managed.

6. That communities are fully engaged, educated and empowered to adjust to the new norm.

News24 understands South African scientists have worked closely with their German counterparts in following that country’s use of “Rt” as one of the main statistical analysis tools used in following the epidemic.

Germany has also used the R(t) < 0.7 as a marker for when restrictions could start being lifted.

In a recent interview with The Guardian, the German government’s chief Covid-19 adviser, Christian Drosten, said the country had “half-empty ICUs” partly because it had brought the reproduction number below one.

De Oliveira said, with the exception of the Western and Eastern Cape, the number had declined from three to one. In other words, the virus no longer spreads to three people for every one person who is infected.

But while De Oliveira and others believe the country has flattened the curve, not everyone agrees the drop in reproduction number is enough.

He estimated that R0 was around 1.2, saying this was not a cause for complacency.

“Any R above one will result in an inexorable rise in new infections, until such time as immunity levels reduce the R naturally by diminishing the availability of people to infect. For this point to be reached, however, millions of South Africans would need to have been infected and recovered.

“The active flattening, in fact, only occurs when R is maintained at one or below one through public health measures,” he said.

De Oliveira previously warned the infection rate in the country was likely to rise by up to 10% once the hard lockdown was lifted. But he said that the lockdown had kept the rate at around 5%, preventing thousands more infections.

He added there were many variables and unknowns in the Covid-19 data still.

While R0 is an “appropriate lens” to look through in assessing the pandemic, Welte said “it’s changing from place to place and time to time in very complex ways”.

But the data suggested the country’s reproduction rate was indeed declining.

“I would interpret that, whatever R0 is, it is declining. That’s not weird, because the lockdown is a very forceful instrument,” he said.

But the more important question, according to Welte, was determining where the infection-spreading hot spots were, and dealing with those.