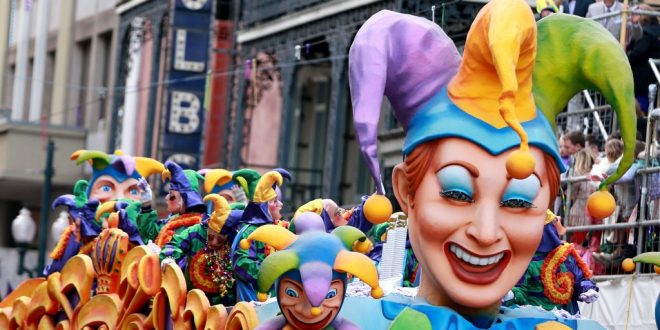 Mardi Gras in New Orleans: 10 do’s and don’ts for tourists looking to celebrate like a local

Mardi Gras celebrations in New Orleans are in full swing, and that means plenty of lively parades, delicious food and beads, beads, beads.

“Mardi Gras is one of New Orleans’ greatest celebrations and seemingly gets bigger and better as the years go on,” says Kristian Sonnier, the vice president of communications for NewOrleans.com. “The streets are full of life — sounds of music coming from every direction, the smell of fresh Cajun food on the grill, flowing drinks, and crowds decked out in colorful and festive costumes.”

With so much going on, the weekslong festivities truly offer something for everyone — or everyone who behaves, that is.

Members of the Krewe of Rex King of Carnival are seen on St. Charles Avenue during Mardi Gras 2019.
(Sean Gardner/Getty Images)

As with any big celebration, there’s always a few revelers who take things a bit too far, and risk injury or even arrest with their wild, exuberant antics.

SPRING BREAK FOR CHEAPSKATES: HOW AND WHEN TO BOOK TRAVEL

According to Sonnier, however, there’s only a few things that tourists and locals alike should remember to ensure a safe celebration. That said, here are five of the must-do activities for every reveler — followed by five more things they really, really shouldn’t try.

Do catch a special “throw.”

The revelers who organize the Mardi Gras parades — i.e., those in one of the city’s many “krewes” — are known to throw beads and trinkets at partyers as they pass by in their floats. But each krewe usually comes prepared to toss its own special items.

“Many of the parades are associated with specific items [also known at throws],” Sonnier tells Fox News. “You can catch a coconut at Zulu, a shoe from Muses, a purse at Nyx – the list goes on. Each throw is hand-decorated by the rider, so they are a rare and exciting find.”

Do eat some king cake.

According to Sonnier, over half a million king cakes are sold each year in New Orleans between King’s Day on Jan. 6 and Mardi Gras — and that’s not including the cakes sent out of state. Just remember that if your slice contains the “baby” (a small baby-shaped figurine hidden inside the cake), you’re responsible for bringing the cake to next year’s gathering.

WHAT EXACTLY IS KING CAKE?

Do wear a costume.

“This is especially true on Mardi Gras day itself, but you’ll see wigs, glitter and all sorts of clever costumes along the parade routes,” says Sonnier — so don’t be left out!

“Music is everywhere in New Orleans, and most of the performers you’ll see playing along the streets aren’t paid by anyone but those who watch them,” the expert says.

Do stake out a public restroom.

This is just good common sense.

“Much of the celebration happens out on the streets,” says Sonnier, “and after a full day of eating and drinking, knowing where you can go to get some water, and take care of nature, is an important element of any reveler’s planning.”

If movies and TV shows have taught us anything, it’s that revelers often flash the krewes in exchange for beads — but contrary to popular belief, public nudity is “a strict no-no” throughout the city, Sonnier warns.

“Beads are thrown in copious amounts from every float, so there’s no need to remove any clothing to get your coveted throw.”

You can keep your shirts on, people.
(iStock)

“With the biggest parades starting the Wednesday before Mardi Gras day, it’s good to remember that this festival is a marathon, not a sprint,” Sonnier tells Fox News. “While everyone is encouraged to have fun, make sure you stay responsible. You wouldn’t want to miss a parade from having a wicked hangover.”

Cops on horseback are a common sight during Mardi Gras festivities, but make no mistake: Those horses are on-duty.

“No matter how cute the horses are, everyone should remember that they are working as much as their riders and touching them is strongly discouraged — and will result in arrest,” says Sonnier.

Don’t drink from a glass container.

Yes, you can drink on the streets in New Orleans, but no, not from a glass container. (“Broken glass on the streets is a hazard,” Sonnier explains.) Luckily, most drinking establishments will be more than happy to serve you in a plastic to-go cup — or fill up a reusable cup, should you happen to have one.

Don’t stake your claim on a parade route too early.

In the interest of giving everyone a decent chance to view the parades, the city of New Orleans has long discouraged too-eager revelers from saving spots along the parade routes too early. But in 2020, authorities started cracking down on anyone reserving a space more than four hours before the parade.

“If you lay out your gear earlier … city workers will remove your items,” Sonnier says, citing the city’s newest ordinance.

At the end of the day, Sonnier says anyone can have a safe, enjoyable time if they keep one thing in mind.

“Remember this is a family event,” Sonnier says. “People of all ages and from every walk of life enjoy Mardi Gras. Be mindful of who’s around you.”