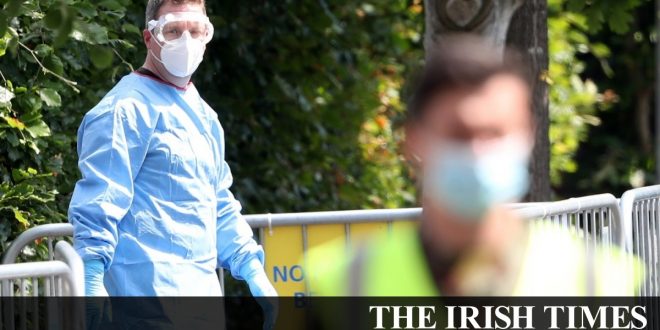 More than 200 people contracted coronavirus while admitted to hospital for other conditions or treatment, according to new figures from the Health Service Executive.

A total of 213 people contracted the disease while in hospital, figures from the HSE show. Patients are considered to have acquired coronavirus in hospital if they present symptoms seven days after admission, or if their case is traced to a hospital outbreak.

The figures do not include transmission of the disease in other healthcare settings such as residential homes, where almost 7,000 cases have been recorded.

A further eight deaths of people diagnosed with Covid-19 were reported by the National Public Health Emergency Team last night. This brings to 1,658 the number of deaths in the Republic.

Some 10 new confirmed cases were reported, bringing the total number of cases to 25,066.

While this is the lowest daily figure since March 11th, chief medical officer Dr Tony Holohan cautioned against “overinterpretation” of the figure due to the bank holiday weekend.

Public health officials will later this week decide on their recommendations to Government in relation to the second-phase easing of restrictions planned for June 8th.

“We think we’re in a good position,” Dr Holohan commented last night, “but can’t reach a conclusion until end of week.”

Officials will be monitoring the trends this week to see if something “untoward” happens, he added.

HSE chief clinical officer Dr Colm Henry said last night there was a “continuing risk” in healthcare settings because they were very vulnerable.

The beginning of the crisis was marked by outbreaks in hospitals, he pointed out, which had caused huge disruption in terms of illness, staff leave and the struggle to provide services.

While there was a strong correlation between community transmission and the risk of outbreaks in healthcare settings, there was now less virus “going round”.

There have been 102 outbreaks of Covid-19 in hospitals to date, and 3,286 people have been hospitalised with the virus, with 408 admitted to intensive care units.

HSE figures show there are currently 330 patients in hospital with confirmed or suspected coronavirus, and 57 in critical care beds.

Jack Lambert, professor of infectious diseases at the Mater and Rotunda hospitals, said “lessons had been learned” since March about the spread of coronavirus within hospitals.

Staff now wore face masks at all times, and were more aware of asymptomatic cases, he said. “So that now I would say the risk for infections in hospitals is low,” he said.

Some 22,621 tests for Covid-19 were performed last week – barely a fifth of available capacity. The positivity rate was 1.7 per cent.

Officials will discuss later this week whether to broaden the scope of testing, given the available capacity.

Meanwhile, Taoiseach Leo Varadkar last night told a meeting of the Fine Gael parliamentary party he was confident the country would be able to move into the second phase of lifting coronavirus restrictions. It is understood that the emergency team is considering reopening playgrounds in the second phase rather than the third phase.

However, this will be considered only if there is adequate supervision at playgrounds, among other issues, and it is understood local authorities are examining how best this can be achieved.

Share your story: Are you living alone during the Covid-19 crisis?

Previous Coronavirus latest: US death rate rises back above 1,000
Next Coronavirus pandemic: Updates from around the world