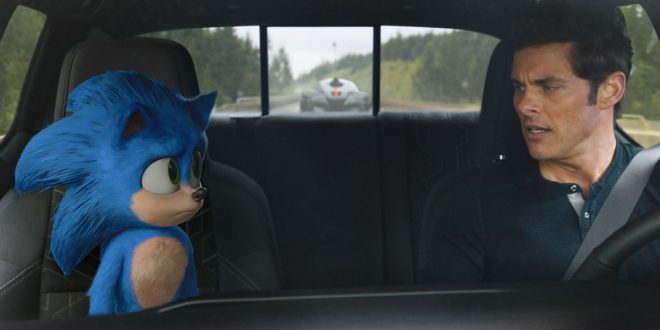 His eyes are bigger, his fur is smoother, and thank God his teeth are no longer so disturbingly… human. Yes, the version of Sonic The Hedgehog zipping into theaters a few hours from now is much less unpleasant to look at than the one unveiled to widespread ridicule last year, when the first trailer for his first big-screen adventure dropped. Post- the redesign all but commissioned by Twitter, you might even call the little blue guy cute, in a plush-doll kind of way. Then he opens his mouth, and you maybe wish those ghastly teeth were still there, if only to distract from the lazy wisecracks, pop-culture references, and earnest clichés that come flooding out. Sonic’s first line of dialogue? “I know what you’re thinking,” uttered in voice-over and slathered on top of a freeze frame of the climax. Yes, it’s that kind of movie: a nattering chore of a “family” comedy that feels written by committee and directed by indifferent machine.

They’ve made over Sonic’s personality, too, in so much as the rodent in the running shoes ever had one. He certainly had plenty of sass, conveyed through the start-screen wag of a finger. Born at the height of the 16-bit console wars, Sega’s answer to Mario was basically an emblem of kid-courting ’90s attitude: cool but rude like Raphael of the Ninja Turtles, an irreverent trouble-maker with spiky hair like Bart Simpson, an animal mascot with a need for X Games speed. That’s not really the vibe of this big-screen Sonic. As voiced by Ben Schwartz, who played Jean-Ralphio on Parks And Recreation, he’s more of a plucky dreamer who just wants to make some friends. That’s not so easy for the guy, though—in part because he’s as annoyingly hyperactive as a kid who’s just wolfed down three bowls of sugary cereal. Oh, and there’s also the fact that this version of Sonic is from outer space and hence has to lay low, lest someone try to capture him and harness his super speed.

After a childhood spent darting around the galaxy, Sonic has made a home in the quaint town of Green Hills, Montana. You’d think such a poky place would be torture for someone who can move faster than the speed of sound. But no, Sonic loves Green Hills so much he’s basically a one-man (one-hog?) tourism board. Really, the whole movie plays like propaganda for the virtues of small-town life. Sharing protagonist duties with this digitally rendered cheerleader is Officer Tom Wachowski (James Marsden), a local cop whose only character flaw is that he’s considering (gasp!) moving to San Francisco, where he might get to solve some real crimes instead of pulling cats out of trees. There’s also the bad guy, haughty scientist and drone commander Dr. Robotnik, played by Jim Carrey with a mustache only slightly less outrageous than the one the character sports in the games. Robotnik considers himself superior to everyone, but he’s especially condescending to the honest, simple folk of Green Hills. “Real Americans,” consider yourself relentlessly pandered to.

It’s an electrical disturbance caused by our hero’s velocity that puts him on the radar of the U.S. military. Following a series of plot complications not worth recounting in detail, Sonic guilt-trips Officer Wachowski into a road trip to San Fran, Robotnik and his gadgets in hot pursuit. Why does someone who can cross the whole country on foot in maybe a matter of minutes need a ride? Well, he doesn’t know where he’s going, the script by Patrick Casey and Josh Miller half-assedly rationalizes. Though Marsden has chauffeured an obnoxious CGI animal companion before (see: Hop—or actually, don’t), he has almost zero chemistry with this talking special effect. That could be because Sonic, theoretically sympathetic for his alien-orphan backstory, is actually kind of a selfish prick—when not starting bar fights just for the experience, he’s getting all judgmental about his new companion’s career aspirations. At best, Tom seems to begrudgingly tolerate the hedgehog, which might be more than plenty of parents in the audience can manage. (For genuine albeit unintentional laughs, they’ll have to settle for some blatant product placement, including a Zillow plug notable for realistically estimating Bay Area rental rates.)

You could call Sonic The Hedgehog a wannabe E.T., except that might require imagining a version of Steven Spielberg’s classic where the extraterrestrial flosses, makes bad Uber jokes, and lectures Elliot about not appreciating what he already has. The film rises not even above the low bar of your average video game adaptation: Last summer’s Detective Pikachu was lousy, too, but it at least offered some gimcrack spectacle in the spirit of its source material. By contrast, this creatively bankrupt project divorces its title character from both the speed and tropical eye-candy, loop-de-loop backdrops of the Sonic games, dropping him instead into drab roadhouses, suburban kitchens, and the passenger seat of a car chugging down a nondescript highway. Even the scant bursts of action are unremarkable; the best director Jeff Fowler can offer is a weak knockoff of the “Time In A Bottle” sequence from X-Men: Days Of Future Past. Only Carrey, half-committing to some recycled uptight-madman shtick, ever threatens to rocket Sonic The Hedgehog out of its pedestrian kid-flick junkyard. You almost want to root for Robotnik, in an enemy-of-my-enemy-is-my-friend kind of way. Which is to say, if the bad guy wins, the good guy shuts up.