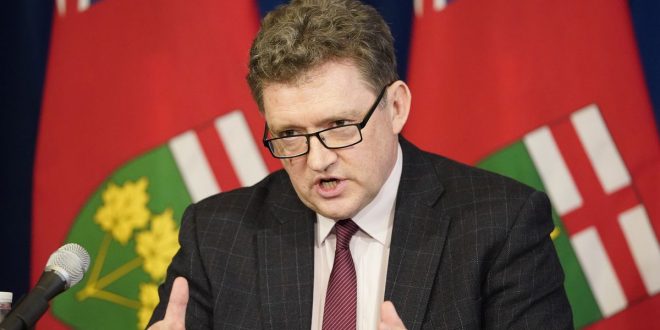 Ontario could see up to 15,000 deaths from COVID-19, health officials warn

Ontario could see 3,000 to 15,000 deaths over the next two years from the COVID-19 pandemic if the province maintains its public health measures, health officials said Friday.

Ontario health officials released projections that also showed that without the closings and restrictions brought in in recent weeks, the province could have faced 100,000 deaths.

The numbers show officials are expecting 80,000 cases of COVID-19 and 1,600 deaths in just the month of April. That’s well below the 300,000 infections they say would have swamped the health care system in the absence of the province’s current closings and physical distancing measures.

With more “significant” restrictions, Ontario could reduce deaths in April to just 200, with 12,500 cases, the officials said – cautioning that the numbers were projections and inexact.

The projections were presented Friday by three senior health-care figures: Matthew Anderson, president and CEO of Ontario Health – the new agency created by the Ford government to oversee the health system; Adalsteinn (Steini) Brown, Dean of the Dalla Lana School of Public Health at the University of Toronto; and Peter Donnelly, president and CEO of Public Health Ontario.

“Where we end up depends on all of us,” Dr. Donnelly said. “I appreciate to many people these are shocking figures.”

Ontario Premier Doug Ford was scheduled to speak later to reporters, and he was expected to release more orders for businesses to close – including, industry sources say, many construction sites – as the province battles the spread of the disease.

Earlier this week, Mr. Ford warned that Ontario was on track to see the same rates of infection and death as in Spain and Italy, where the virus as overwhelmed hospitals.

However, he initially declined to release modelled projections for infection and death rates, warning overestimates would cause panic. Then on Thursday, the Premier changed course, and said Ontarians deserved to see what he warned would be a grim assessment of the virus’s potential damage.

Meanwhile, Ontario reported that as of Thursday, there were 462 new cases across the province, for a total of 3,255 with 67 deaths.

The move to release Ontario’s projections comes after Prime Minister Justin Trudeau said Ottawa would only offer similar projections in the coming days, once it could provide “robust” modelling based on data received from the provinces.

Asked about Ontario’s projections earlier on Friday, Mr. Trudeau said he would not preempt Mr. Ford’s announcement but that he had seen the province’s numbers.

“We know that this is a very difficult situation for Canadians, there are some very challenging projections out there that will emphasize how it important it is for all of us to do our part, to stay home,” Mr. Trudeau said.