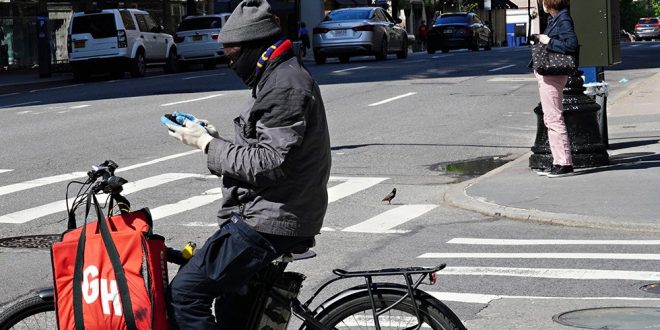 African Americans have been hit disproportionately by COVID-19, a trend likely to continue or even rise as states begin to reopen for business.

Black Americans are more likely than their white counterparts to work in the service industries that have been shuttered for the past several weeks, and they are also more likely to suffer from some health conditions that make people vulnerable to the novel coronavirus.

Advocates say black workers may also feel they have little choice but to return to work given their economic situations.

“The reality is people who will continue to get COVID are low-wage workers, people of color, who feel they must go back to work and don’t have the flexibility to stay at home,” said Jocelyn Frye, a senior fellow at the Center for American Progress.

She said such workers are less likely to have health insurance and paid leave to support them when they get sick.

“It exacerbates a problem we’re still trying to figure out. It’s irresponsible, and it suggests a lack of meaningful concern about the disproportionate impacts of reopening when those rates are rising and not falling,” Frye said.

While African Americans make up just 13 percent of the population, they account for 30 percent of COVID-19 cases, according to data released by the Centers for Disease Control and Prevention.

White Americans make up 76.5 percent of the U.S. population and 52 percent of COVID-19 cases.

Governors say they are trying to find a balance between public health and the economy as they begin to loosen restrictions on businesses and retailers, including in Southern states with large African American populations.

But openings are likely to increase the spread of the disease as people come into more contact with one another.

Greg Millett, vice president and director of Public Policy at amfAR, an AIDS research foundation, said he and his colleagues fear the rollback of social distancing policies will lead to more deaths, particularly among African Americans.

“There’s something here about being a part of a marginalized population and the opportunities that you have in a society, in terms of jobs, in terms of income, in terms of access to health insurance, that’s playing out in a large way with this COVID-19 crisis and really magnifying these issues for African Americans, as well as other communities of color,” he said.

African Americans also suffer disproportionately from underlying health conditions like asthma and diabetes that can lead to serious illness and death for people who contract COVID-19. The reason is longstanding inequalities that Anthony Fauci

Anthony FauciSchumer: Fauci may testify before Senate next week Fauci dismisses ‘circular argument’ coronavirus originated in Chinese lab Pelosi slams White House for blocking coronavirus task force members from testifying: ‘They might be afraid of the truth’ MORE, the director of the National Institute of Allergy and Infectious Diseases, has commented upon.

Fauci in an April 7 briefing said health disparities have “always existed for the African American community.”

“But here again, with this crisis,” he said, “it’s shining a bright light on how unacceptable that is.”

Nearly a quarter of black Americans work in the service industry, and 16 percent work in transportation, production or delivery.

“Returning to work will likely increase exposure to the virus, particularly in service jobs that require customer interaction.”

Some workers may not feel safe returning to work but could lose their unemployment benefits if they don’t.

“It’s asking people to pick between their livelihoods and their health. No one should be put into that scenario,” said NAACP President and CEO Derrick Johnson.

“That will create a higher risk for those families, a risk of not having the economic security to provide for their families or the risk of bringing or contracting the virus or bringing it to their families.”

Some studies suggest black Americans living in the South could be at a higher risk for COVID-19.

An amfAR analysis found that 58 percent of COVID-19 deaths occur in counties that are disproportionately black — meaning black Americans make up more than 13 percent of its population. Ninety-one percent of these counties are located in the South.

An analysis of March COVID-19 admissions at eight Georgia hospitals found 83.2 percent of patients were black while 10.8 percent were white. Overall, blacks in Georgia make up 52 percent of COVID-19 deaths despite being 31 percent of the total population.

Georgia Gov. Brian Kemp (R) faced criticism from health experts, mayors in his state and even the president for allowing bowling alleys, hair salons and other businesses to reopen late last month. Kemp’s office said in a statement his community outreach committee is working with leaders in minority communities to get their input on emergency response efforts and health and economic recovery plans.

“Governor Kemp and the Coronavirus Task Force are taking action to protect the health and well-being of all Georgians by closely following the data, relying on the advice of public health officials, and soliciting critical input from key leaders in communities across our state as we fight the spread of COVID-19,” his office said.

In Louisiana, blacks make up 32 percent of the population but account for 56 percent of coronavirus deaths. Gov. John Bel Edwards (D) said he hopes to allow some businesses to reopen May 15.

Advocates think Congress and the Trump administration should be doing more to mitigate the risk COVID-19 poses to communities of color. Democrats in the House have called for the Occupational Safety and Health Administration to issue an emergency temporary standard instructing employers to take extra precautions to keep workers safe. Advocates also worry people of color aren’t getting access to COVID-19 testing and treatment because they live in communities that historically have lacked access to health care.

Activists have been troubled by the photos emerging of mostly white protesters at state capitols urging their governors to lift restrictions on businesses without seeming to consider the disproportionate impact of the virus on people of color who work in service jobs.

“White folks are at capitols with guns demanding black people go back to work,” said Rashad Robinson, president of Color of Change, a racial justice organization.

“Given the history of this country, it’s more than simply ironic that this is where we are at.”

Previous Whistleblower: Trump official ignored warning on drug, virus
Next The ‘boogeyman’ of pediatrics: What is Kawasaki disease and is it linked to the coronavirus?