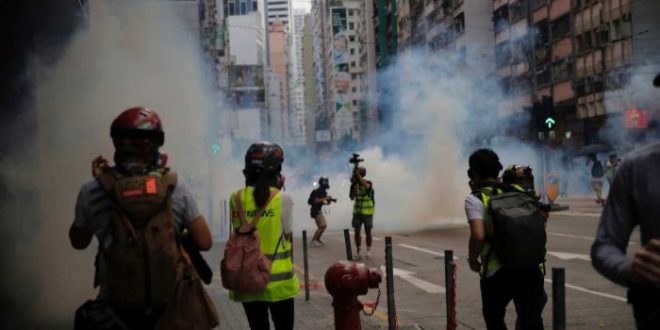 Police in Hong Kong have fired tear gas and used a water cannon and pepper spray to disperse thousands of people protesting against Beijing’s plan to directly impose national security laws on the city, the biggest flare-up there since COVID-19 lockdowns began.

Protesters took to the shopping district of Causeway Bay on Sunday chanting “Revolution of our time. Liberate Hong Kong” and “Hong Kong Independence, the only way out”.

The protest was the first since Beijing proposed national security laws on Thursday and posed a fresh challenge to Chinese President Xi Jinping as authorities struggle to tame public opposition to China’s tightening grip over the global financial hub.

Hong Kong democracy activists say the national security legislation is evidence of Beijing’s encroachment on freedoms guaranteed to Hong Kong under its “one country, two systems” style of governance.

The arrangement, which has been in place since the former UK colony’s return to Chinese rule in 1997, guarantees the city broad freedoms not seen on the mainland, including a free press and independent judiciary.

At least 120 people were arrested, mostly on charges of unlawful assembly, police said in a Facebook post.

They said in a separate post protesters threw bricks and splashed unidentified liquid at officers, injuring at least four members of the police’s media liaison team.

They warned that such behaviour was against the law and police would pursue the matter.

Earlier in the afternoon, prominent activist Tam Tak-chi was arrested during the protest for what police said was unauthorised assembly.

Mr Tam said he was giving a “health talk” and was exempt from social-distancing measures that prohibit gatherings of more than eight people.

‘Time is running out in Hong Kong’

Sunday’s rallies are a continuation of a months-long pro-democracy movement that began last year and has at times descended into violence between police and protesters.

The new law, expected to be passed on May 28, would bypass the city’s legislature and allow the Hong Kong Government to set up mainland agencies in the city.

There are fears it will allow Chinese agents to arbitrarily arrest people for activities deemed to be pro-democracy.

Police conducted stop-and-search operations in Causeway Bay and warned people not to violate a ban on gatherings of more than eight people, imposed to curb the spread of coronavirus.

“Now is the beginning of the end, and time is really running out in Hong Kong, and that’s the reason for us — even under the outbreak of COVID-19 — we still need to gather our strength to protest,” democracy activist Joshua Wong said.

Authorities in Beijing and Hong Kong have said the proposed laws are necessary and will not harm the city’s autonomy.

“We must face [this issue] squarely. If the situation is not effectively contained, it may be elevated to the level of endangering national security.”

A water-cannon truck was parked outside, while dozens of riot police were deployed across the city.

Avery Ng of the League for Social Democrats pasted protest signs on a plaque outside the Liaison Office, despite warnings from police.

He described it as an “evil law” and appealed to Hong Kong people to come out and protest against it.

Some local commentators have described the proposal as “a nuclear option” that is part of Mr Xi’s high-stakes power play.

A backlash intensified on Saturday as nearly 200 political figures from around the world said in a statement the proposed laws were a “comprehensive assault on the city’s autonomy, rule of law and fundamental freedoms”.

Previous UP government banned mobile phones inside Covid-19 hospitals to hide their poor condition: Akhilesh Yadav
Next Can a trip to the iconic Monaco Grand Prix cure an F1 cynic?