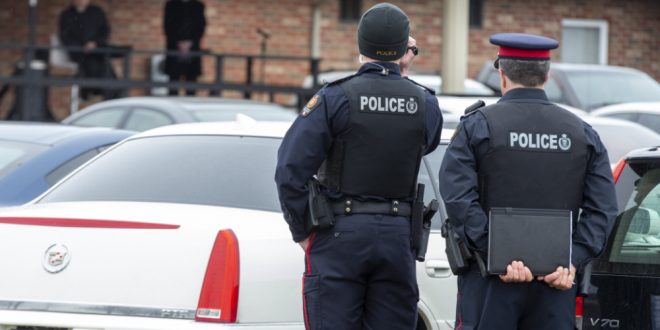 A church in Aylmer, Ontario is set to face charges after ignoring rules on social distancing and instead holding services on Sunday morning.

Police had warned the Church of God about hosting the outdoor service, but the warning fell on deaf ears. Now, police say “people will be held accountable” after officers showed up and took video of the scene. Though officers took no immediate action on the day, it seems imminent.

On Sunday, some 70 cars were seen arriving to the church’s parking lot. The local pastor, Henry Hildebrandt, spoke from a riser as those who gathered to hear his words remained in their cars. His celebration went out over a radio signal; the congregants tuned into it from their cars.

“So why don’t we just wave at each other and honk a little bit?” he said, and car horns rang out.

The pastor felt that the event was a scene no different to the average grocery store lot on an average Sunday. Global News reports that this was the church’s third such service, and that police have previously threatened that they would use roadblocks to halt it.

“We explained to them that it’s not mandatory to show up. Whoever would like to join this morning, it’s your decision, and you could possibly be ticketed. They showed up and were cheering me on.”

“We’re not asking for special privilege or treatment. There was no parking lots as safe as ours this morning. We had no interaction before, during or after.”

The pastor said he doesn’t know if tickets will arrive, but Inspector Nick Novacich of Aylmer Police Service told CTV:

“Today our officers were on scene monitoring the events, and watching what was taken place. Just because the public didn’t see us handing out a ticket like a speeding stop, people will be held accountable for what happened today.

“It’s no secret the officers were videotaping the event and we’ll review all that video and we’ll put a package together to present to the local county prosecutor to see what route we need to follow.”

“Through consultation this week with provincial and federal prosecutors there is nothing saying we had to physically issue tickets to everyone in attendance. There is other avenues we can pursue including serving a summons on those who were in breach.”

Aylmer police noted in a statement provided to Global that the Emergency Management and Civil Protection Act says it is illegal to gather in groups of more than five people, which includes religious services.

Pastor Hildebrandt, it seems, remains undeterred by such a threat.

“I was overwhelmed to see how many people did stop by to listen in and I also feel we did very well in social distancing,” the pastor said when the service wrapped up.

“This is not a gathering because people are staying in their vehicles. There was no crowd to be seen anywhere.  When I preach I use my hands, my arms, half of my preaching is by my actions. It’s very important to interact that way, As you saw we waved at each other and blinked the lights. It just makes all the difference.”

— with files from The London Free Press