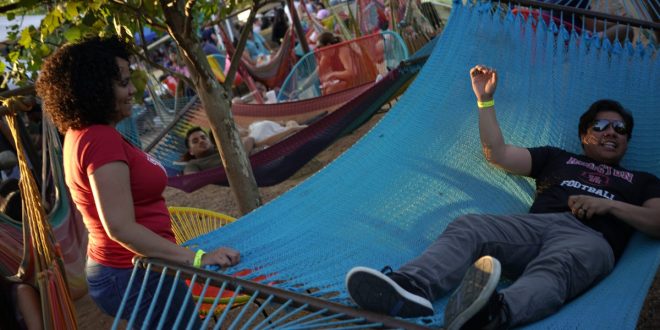 On a typical night during the high season, more than 1,000 customers flock to the popular Axelrad Beer Garden in Houston. Its outdoor space, which has been open for around five years, is known for its brightly colored hammocks, towering tree exhibit, and overall artsy vibe.

The bar was fortunate enough to be thriving before the pandemic struck the US. But now that Texas is going through its second round of COVID-19-related closures in three months — and seeing unprecedented spikes in coronavirus cases — Axelrad’s owners, along with many Texans, are bracing for even greater economic devastation.

“One of the toughest things was Texas opened up bars and restaurants, but it didn’t have anything in place where everyone was playing by the same rules,” Axelrad owner Monte Large told Business Insider. Large said the lack of clear regulation around reopening policies may have exacerbated the latest outbreak. “Some places had mask rules and others didn’t. It pitted us against some fellow bar owners.”

Texas Gov. Greg Abbott ordered bars and restaurants closed throughout April, but began a phased reopening started in early May. Axelrad held off from reopening for about three weeks in order to make sure its outdoor seating was spaced out and set up a system in which customers could order their drinks by phone without ever coming in contact with a server, Monte said.

When it reopened, the beer garden enforced a mask policy but it was somewhat of a challenge because some other bars in the area didn’t have one in place. Without an official state policy ordering that masks be worn in public, there was a clear ideological divide between businesses that required them and those that didn’t.

“It really felt in March, to me, that we were all in this together,” Large said. “Now it feels like we’re really divided. Not only just because of the differences in restaurants and bars, but the whole mask policy has become so politicized, the reliance on science has become politicized, so to be its become really divided or aggressive.”

Large said that he and the bar’s other owners are proud of how family-oriented Axelrod is. Many of the more than 40 employees are new parents and others are caretakers for older relatives, he said.

So when bars were ordered closed the first time around, the owners decided to dip into savings earmarked for a small renovation to make sure their staff was paid their normal earnings, including tips, and didn’t need to go on unemployment, Large said. When their savings reach near depletion, they applied for and were granted a “lifesaver” Payroll Protection Program grant, which they were — at the time — required to spend in eight weeks. (There has since been an extension for how long businesses had to spend the grant money.)

“They changed the rules, but we had already spent all the money,” Large said. “This time is especially painful because we went through all our rainy day funds.”

Large blames a failure of state leadership for the recent surge in cases.  Businesses reopened too early, he said. During the brief reopening, he continued, you could walk into one crowded place with no mask, and then an adjacent property would have a mask requirement in place.

Hospital ICUs recently started to reach and exceed capacity as more and more residents fall ill from the coronavirus. As of Wednesday, at least 2,455 Texas residents have died from COVID-19, according to Johns Hopkins University.

Aside from the human cost of Texas’s decision to reopen, Large said that he’s worried about the businesses that might be lost during this second closure.

“For small businesses like ours, this second closure is just devastating,” he said. “I feel like we all sort of weathered the first one. This second one, though, is just so incredibly different because it doesn’t seem like there is a plan in place … We just feel like we’re left out to die on the vine.”

Previous Govts trying to manage perceptions, give sense that COVID-19 problem not as bad: Rahul Gandhi
Next Promise and delivery: On India’s first COVID-19 vaccine