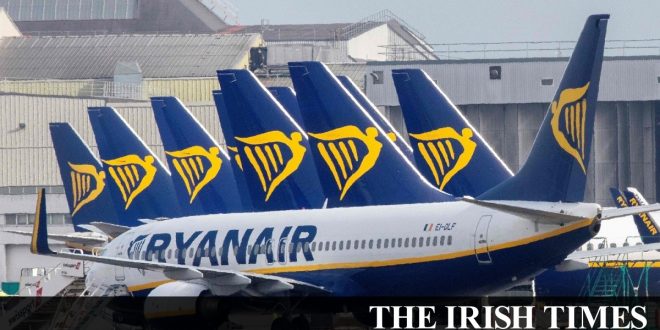 Covid-19 travel bans will leave Ryanair with a €200 million loss in the three months to the end of June, the airline group predicted on Monday.

The Irish carrier confirmed the likely loss as it reported that profit after tax in the 12 months ended March 31st, its last financial year, rose 13 per cent to €1 billion.

“The group expects to record a loss of over €200 million in quarter one, with a smaller loss expected in quarter two (peak summer) due to a substantial decline in traffic from Covid-19 groundings,” Ryanair Holdings said.

It now expects to carry 80 million passengers in its current financial year, close to half the 154 million it expected before the pandemic struck, grounding airlines, in March.

Ryanair also warned that €30 billion worth of “unlawful state aid” given to rivals such as Lufthansa and Air France KLM would render its return to scheduled flying significantly more difficult.

The group believes that these carriers will use the cash to fund below-cost selling of flights across Europe.

Its results show that revenues rose 4 per cent in the 12 months to end of March to €8.5 billion from €7.7 billion during its 2019 financial year.

Passenger numbers gew 4 per cent to 148.6 million from 143.1 million over the same period. The airline had €3.8 billion in cash at the end of March.

More from The Irish Times