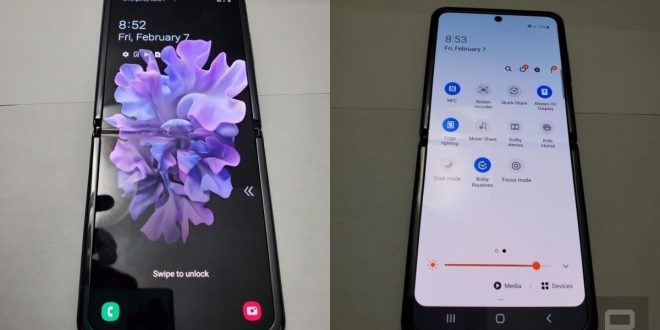 Open, its 22:9 aspect ratio is obvious — as is that crease in the middle — while the narrow-but-tall device has plenty of space. Overall it’s very similar to Motorola’s reborn Razr, but minus the massive chin. Pictures we’ve received reveal its model number will mark it as the SM-F700U, while earlier leaks have suggested specs including a a 6.7-inch, 2,636 x 1,080 screen, Snapdragon 855 Plus, 8GB of RAM and up to 256GB of storage.

It’s also supposed to use extra-thin glass instead of plastic for the screen, and hopefully that vertical hinge will be easier to manage than the Galaxy Fold was. Multiple leaks suggests that the hardware may be close to release and there have been rumors suggest it could go on sale in some regions by Valentine’s Day for about $1,400 — that’s pricey, but still less than the new Razr. Check back on Tuesday to find out more about when the Galaxy Z Flip will be available and for how much.