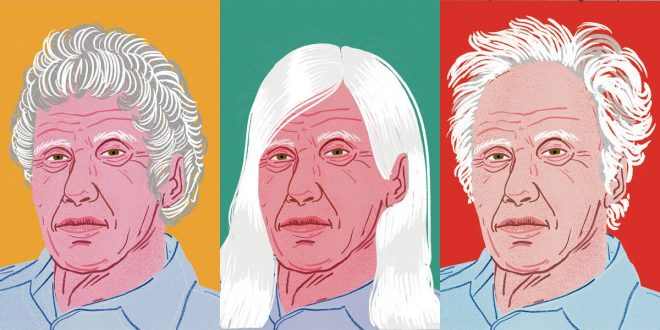 Seeing the future in the salon mirror: The thrill of my first pandemic haircut

This summer Ian Brown explores how Canadians are reclaiming their lives from quarantine, whether it’s the thrill of a haircut, the risk of a hug or a chance – finally! – to jump in a pool again.

Let me say this about my desperate longing for a haircut after four months of quarantine: I don’t mind having long hair. But most of my hair now grows on the rearward-facing hemisphere of my head, in a trailing, Laurier-like wake. This produced the impression, as it grew longer and more chaotic, that my skull was disintegrating as I passed through time and space. So when I finally booked an appointment last week with Chanel, my hair stylist at Studio 67 in the heart of downtown hipster Hogtown, and a three-page list of rules pertaining to said haircut arrived by e-mail beforehand, I read it eagerly. Also nervously.

The purpose of the memo was “to outline our new protocols.” Visits were by appointment only. “We will engage in touch-less greetings and goodbyes,” the instructions continued. I was to “arrive with clean dry hair.” Shampooing and blow-drying and beard-styling were off the menu, as were children, pets and friends. I was not aware people went to the salon with children, pets and friends. I subscribe to the old-fashioned get-in-and-get-out school of hairdressing: One’s vanity should be witnessed by as few people as possible.

As the pandemic slowly and unsteadily recedes across the land (other countries are nowhere near so fortunate), a series of tentative reawakenings is occurring. The first mass reawakening is the haircut. A haircut is not the end of COVID-19, but it might signify the end of the beginning. Haircuts let us ask radical questions of ourselves – and have done so, for, oh, the past 30,000 years or so. A haircut is enticing and also terrifying because it hints at a new self. Who will we become? Will we hate it or love it? Will we look the same as we did before? Will we be the same? Will our world change? A haircut is our first guess at an answer.

Bemasked as instructed, I rang Studio 67′s bell. The salon is in a part of town where a cheese sandwich on focaccia costs $15. An assistant in a mask let me in and sprayed my hands with sanitizer before I stopped moving. She steered me into a smock. It felt tight. Normally I sit under a parachute of slippery black nylon, but canopies are insufficiently sanitary in a pandemic. The assistant pointed to a chair and told me to sit down. Glass cylinders of blue barbicide now stood next to economy-sized vats of greenish-yellow Scrubber Cleanz disinfectant.

Everyone is longing for a haircut, but everyone now has to do the calculus of whether their cravings and desires – for a beer at a bar, a swim, a hug (imagine that) – are worth the risk. With so much changeable information on how the virus is transmitted, most of us make guesses (logical or otherwise) and hope for the best. But there are some promising precedents in the hairstyling business. Last May in Springfield, Mo., two hairstylists who (unknowingly) had COVID-19 saw 140 clients over the course of eight days. But because the salon made everyone wear masks, staggered its appointments, spaced out its work stations and kept meticulous contact-tracing records, no cases of coronavirus have been linked to the two hairdressers or to the salon – results that the local county officer of health found “encouraging,” and a possible model for other businesses.

Studio 67′s measures – wall-to-wall masks and gloves, incessant spritzing and sanitizing and cleaning, physically distanced chairs – convinced me a haircut was safe. But there is no denying that the decision to have a haircut in the summer of 2020 is an existential one.

Chanel – Chanel Cezair, 35, owner of Studio 67, mother of two under the age of two, hazel eyes, talented conversationalist – appeared in a black smock and a black fabric mask. I found I was thrilled to see her; it was like getting a nod from the pilot when you board a flight. She seemed happy to see me, despite my ebbing browline. On a normal day, the salon sounds like a hive of hot bees. But with only three well-spaced customers in the room, a careful stillness prevailed. “I wanted to keep it looking as normal as possible,” Chanel said. No one works more than a four-day week.

At the outset of the shutdown, Chanel took her office laptop home to “stay in touch with our clients.” She sometimes wished she hadn’t. Her clients were desperate to connect with the salon: They begged her to come to their homes to do their hair. They offered to come to her home. “I said to them, I have two kids and a mother in her 70s.”

It’s a crazy sort of narcissism: In the face of global pandemic death, humans become obsessed with their appearance. During the quarantine, Toronto Public Health investigated at least 124 complaints of salons and barber shops breaking the rules. One rogue cutter known as Apex da Barber reportedly performed 200 quarantine haircuts a month. Bribes of $500 a clip were not unheard of.

Where did this urgency and desperation come from? Who did we think we had become, because of our overgrown hair? We assumed we looked like primitive hairy cave people, like Sasquatches and the Wild Child. We associate hairiness and unkemptness with Stone Agers and Neanderthals slouching across the veldt to club Betty Rubble in her mastodon fur bikini. We do this out of long-standing cultural habit (a century of movies, many centuries of artistic depictions), as an archeologist named Judith Berman pointed out in a famous 1999 academic paper, Bad Hair Days In The Paleolithic.

We also do it, she added, with very little scientific evidence that early man was a lion-maned ball of fuzz. He was not, in fact: The first evidence of neatly groomed hair shows up 30,000 years ago in the paleolithic “cave man” era, in the form of the Venus of Willendorf, a sculpture of a vast-breasted goddess wearing what look like braided cornrows.

“The archaeological data suggest that the Cave Man can control the world around him to the extent of making tools, making art, and wearing clothing,” Dr. Berman wrote. “But his hairiness [in our depictions of him] subverts his humanity; it implies that he cannot master his own body, cannot tame its nature.”

Over the centuries, we’ve turned Hairy Cave Man into an alt version of ourselves, into a form of Other: either a purer and more innocent and more “natural” version of ourselves, from which modern industrial man has sadly fallen; or an angry, impulsive, uncontrollable, uncivilized hairball of instinct we’ve left behind. But whatever he or she is, it is not us.

Chanel hadn’t cut her own hair once in four months. (She wears it in what she calls a “beach wave effortless look,” styled but never showy: “I always want my clients’ hair to look better than mine.”) Instead she trimmed her husband’s – his is longer than hers, down his back – again and again, an inch at a time. She gave her 14-month-old a tall flattop fade. “I’d been watching a lot of Peaky Blinders,” she admitted in bursts, between snips.

Pre-COVID-19, Chanel cut my wet locks by degrees. Now she advanced like a thresher, boldly but deftly lopping inches at a snip. I felt glabrous and revolutionary. My brain felt like it had an outline again. I watched swatches of silver and grey drop to the floor. Dare I say it? It was exciting. For four months, nothing had changed: the demoralizing death rate, the bitter news, the draining economy, the sameness of the faces on Zoom. And now, suddenly, something had changed that couldn’t be retracted or changed back again, at least until it grew back. As I emerged from my reverie, Chanel was saying, “I think the only reason we’re not considered an essential service is because we’re not unionized.”

We told ourselves, as the pandemic came on, that the world would never be the same again. And yet the very second the salons opened, the world lined up to get its hair cut. Of course it did. Human beings have been obsessed with hair for as long as we’ve been human. Hair grows from inside us to become our outward manifestation. We wear it longer (during the reign of George I, if you were an aristocrat, or during the 1960s, if you were any kind of radical), or shorter (the Bedford Crop, worn to protest a tax on hair powder in 1795, launched two and a half centuries of shorter men’s hair; Pierre Trudeau’s comb-forward was a version of it). The point isn’t the length: the point is that hairstyles tend to change when the world changes.

These days we are keen to clean ourselves up, to tidy our untrimmed, messy edges. Is the world about to change again? We want the pandemic to have taught us something, to believe that we can make a better version of the world out of the once-indulgent but now chastened beings we have become. We aren’t that old version of ourselves any more, just as we are no longer the wild and hairy early humans that we imagine existed, despite the evidence, because we need to believe we’ve evolved beyond their dumdum, grunting selves – COVID-19-beset Texas, Florida and Arizona notwithstanding.

The pandemic keeps proving how little control we have over what happens to us and over how we react to those challenges. But if we get a haircut, we can tell ourselves progress isn’t an illusion. Let’s hope that’s true.

Stuck in a car, it’s life from afar – and in a COVID-19 pandemic, it’s the only way to live

Two metres and a world apart: Life in lockdown for me and my disabled son

Your money or your life? Coronavirus-era economics makes us ask grim questions about how to value each other

Previous Trump Says Areas With Surging Coronavirus Cases Are ‘Going To Be Fine’
Next Why is there a resurgence of COVID-19 cases across the U.S.?