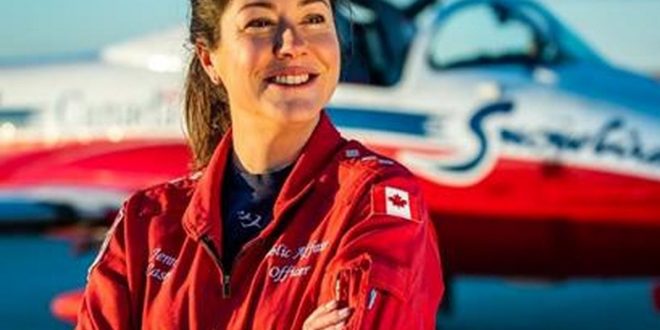 The Snowbirds aerobatic team member who was killed in the crash of one of its Tutor jets is being remembered fondly as a proud native of her hometown of Halifax.

Capt. Jenn Casey, a public affairs officer, died Sunday when the plane crashed in a residential area of Kamloops, B.C., while on a cross-country tour meant to convey hope during the COVID-19 pandemic.

Casey, who had been with the Snowbirds since November 2018, is a former journalist who worked as a reporter, anchor and producer at NEWS 95.7 in Halifax.

Dan Ahlstrand said Casey was the first person who reached out to befriend him when he transferred to the East Coast’s largest city from a sister radio station in Moncton, N.B., in 2012.

Ahlstrand said Casey was “super proud” of her community.

“She lived in the north end,” he said. “So she gave me the insiders tour of the haunts to go and check out.”

Ahlstrand said she also offered advice on such things as where to find the best donair — a Halifax fast food staple.

He described her as an upbeat person who had an infectious smile — a trait Ahlstrand said he’ll remember the most.

“She always brightened up the room and she was such a very positive person. Even when her beloved Montreal Canadiens were awful, she kept that smile on her face.”

Ahlstrand said Casey left the radio station in 2014 to join the military and recently returned as a guest on one of its talk shows just before the Snowbirds’ current tour, dubbed Operation Inspiration, began in Halifax on May 3.

Another former radio colleague, Scott Simpson, also paid tribute to Casey in a Facebook post from his current home in London, Ont.

“Jenn was a delight to be around, solid in her work, and had such an infectiously upbeat and genuine way about her,” said Simpson. “We could all see the pride she expressed in her work with the Canadian Forces Snowbirds as Captain Jenn Casey.”

The jet’s pilot, Capt. Richard MacDougall of Moncton, N.B., survived the crash and is being treated for injuries the military has said are not life-threatening.

Reached in Dieppe, N.B., MacDougall’s mother, Paulette Richard, said she has talked to her son since the crash, adding that he is trying to process what happened.

“We mostly shared a personal conversation about how you feel after having been through a trauma like that and losing a partner like that,” Richard said.

She said MacDougall’s injuries included multiple fractures that occurred when he hit the roof of a home after ejecting from the aircraft.

“None are life-threatening, and none are going to likely affect his mobility or quality of life when everything heals,” she said.

Richard described her son as a “positive, friendly and caring person.”

“He’s a pretty good guy I think, and I think other people would feel the same way,” she said.

Richard said the family is from a military background and is familiar with the order in which her son flies with the Snowbirds. When they were alerted Sunday to a video of the crash that was on television, she said they had an idea of possible trouble.

After a few phone calls, Richard said officials confirmed that her son had been involved.

“We reached out to find out the extent of his injuries and we were obviously relieved and very grateful that he was alive, but very saddened to hear that he had lost Jenn.”

Casey joined the Canadian Forces in 2014 and was based out of Trenton, Ont., according to her Royal Canadian Air Force bio.

Before joining the Snowbirds, she spent most of 2018 with the CF-18 Demo Team, travelling around North America and the United Kingdom with the NORAD 60 jet.

“On behalf of the entire province, I offer my deepest condolences to Capt. Jennifer Casey’s family, friends, CFSnowbirds team and fellow service members,” said McNeil. “Nova Scotians stand with you and send our love, thoughts and prayers.”

The crash is the latest of a series of recent tragedies to profoundly touch Nova Scotia amid the COVID-19 pandemic.

Nearly one month ago a gunman killed 22 people during a rampage through rural parts of the province — an event followed by the crash of a military helicopter from a Halifax-based frigate off Greece that killed six people, including three from the province.

And just last week, police in Truro, N.S., called off a six-day search for three-year old Dylan Ehler, who went missing while playing outside his grandmother’s house near a river that runs through the town.