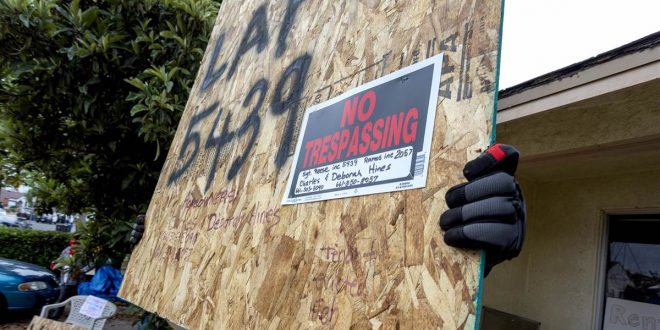 Some landlords are using harassment, threats to force out tenants during COVID-19 crisis

Sada Jones anxiously paces inside her apartment every time she catches a glimpse of her building’s maintenance workers through a damaged glass patio door half boarded up with scrap wood that she says her landlord refuses to repair.

Jones, 23, a hotel cook, has been unable to make rent payments on her New Orleans-area apartment since being furloughed on March 19 due to the COVID-19 pandemic. As a result, she alleges, her landlord began using aggressive tactics to force her out, including cutting off her utilities and sending maintenance workers to demand she leave.

“I’m scared because I don’t want to move with the situation that’s going on with COVID, but I also don’t want to live in these conditions,” she said. “I’m constantly anxious and paranoid about what they’ll do next. I don’t feel safe.”

Despite efforts by many jurisdictions to halt evictions either through formal moratoriums or court closures, some landlords have taken matters into their own hands with illegal “self-help” evictions and have been harassing and intimidating tenants like Jones who are unable to pay rent — many due to pandemic-related job loss — in an effort to get them out.

These tenants, many who are waiting on unemployment or stimulus checks, are put in the precarious situation of having to endure hostility or leave their homes in the midst of a public health crisis.

Amanda Golob, managing attorney of the housing law unit at Southeast Louisiana Legal Services in New Orleans, said her office has seen several abusive tactics from landlords, including changing locks, cutting utilities, refusing to make essential repairs and constant harassment via phone calls and text messages: “They are creating an environment that forces the tenant to leave on their own.”

Similar incidences of self-help evictions, which are a violation of the law in most jurisdictions, have been reported by housing organizations across the country since the onset of the pandemic.

Nearly 30 percent of respondents to a survey by the National Fair Housing Alliance said they’ve experienced an increase in fair housing complaints, incidences or calls since mid-March, when most states went into COVID-19 lockdowns.

“We have seen both prior to pandemic and during pandemic some landlords will resort to intimidation or other tactics to push their tenants out. It is certainly possible that given the increasing economic pressure that both families and landlords are under that that could increase,” said Alieza Durana, a writer and spokeswoman for the Eviction Lab at Princeton University.

Jones said her landlord’s hostile tactics began a few weeks after she missed her April payment. Claiming she broke her lease and surrendered her key, her landlord sent maintenance workers into her apartment to demand she leave immediately, she said. Jones, who still had her key, refuted the claim and refused to go.

A few days later, he cut off various utilities, she said: disconnecting her air conditioning cables as temperatures began to soar and turning off power in parts of her apartment, including the kitchen. She no longer has a working stove.

Jones used her March rent money to stock up on two weeks of food and essentials at the start of the pandemic. Whatever was left from her savings was used for food in April and May, she said, leaving her nothing for housing costs.

“I had to make a decision. Either I pay the rent or I buy food, so I chose what I immediately needed at the time, which was food,” she said.

Meanwhile, a broken sliding glass door vandalized in February has been untouched despite her repeated requests to have it fixed.

Regardless of any lease violations, the landlord still has an obligation to make her unit livable, said Hannah Adams, a legal aid attorney with Southeast Louisiana Legal Services who is representing Jones.

When NBC News emailed Jones’ landlord, Joshua Bruno, to ask about her allegations — specifically that he refused to fix the broken door, cut off some utilities to the apartment and had staff intimidate Jones — Bruno responded with more than a dozen points, calling the allegations “false,” claiming Jones was “trespassing” and that there was an “open police investigation into her breaking back into her apartment.”

Jones and attorneys with Southeast Louisiana Legal Services say Bruno’s accusations are baseless and false. Adams said she has repeatedly requested police reports, video or any other documentation regarding a police investigation into an alleged break in and has received nothing from Bruno.

While self-help evictions are outlawed in Louisiana, Bruno is also barred from evicting tenants under the federal Cares Act, Adams said. The law, which was enacted to aid individuals and businesses harmed by the pandemic, prohibits landlords who receive federal loans or assistance — including Bruno, who has a Fannie Mae loan on the property — from initiating eviction proceedings until July 25.

Jones is not alone in her allegations against Bruno. Other renters living in Bruno’s units also claim they’ve been subjected to self-help tactics after losing jobs amid the pandemic (Bruno has maintained that his actions were appropriate and that his company follows state and federal laws).

Every trick in the book

When Arkansas resident Milton Light wasn’t able to pay his rent, his landlord unleashed several aggressive tactics to get him to leave so she could get another tenant in as soon as possible, he said.

Light, 34, lost his full-time job as a coiled tubing operator due to the pandemic on April 3.

His hours had already been cut by the end of March when he let his landlord, Genai Walker-Macklin, know that he wouldn’t be able to make rent the following month. It was then that she told him he had to be out by April 5, he said.

She began showing the home to other potential renters.

When Light pushed back saying she cannot bully him out of his lease which ends in the summer, she began “using every trick in the book” against him, he said.

According to court documents filed by Light, she changed the locks on the property, called his utility companies to have his gas and electric shut off and even tried to have his vehicle towed from his home.

When that didn’t work, she filed a complaint with the Arkansas Department of Human Services alleging that his home was unsafe for his four young children, he said. She also began harassing Light’s ex-wife with whom he shares custody of his children, Light claims.

According to a police report seen by NBC News, the landlord also had movers show up to forcibly remove his things from the home until authorities stopped her.

“She’s taking these actions to try and force him out of his home without a court giving her an order to do so,” said Frank Jenner, an attorney with the Center for Arkansas Legal Services who is representing Light. “You can’t take action until the court authorizes a particular action.”

Walker-Macklin filed a civil eviction lawsuit on April 30, and Light responded with a counterclaim alleging an illegal eviction and asking for a preliminary injunction that would prohibit any further efforts to remove him from the property without a court order. The case is still pending.

Light’s landlord did not return several calls from NBC News requesting comment, and her attorney declined to comment due to pending litigation.

Arkansas is one of the statesthat has not had any kind of mandated moratorium on evictions amid the COVID-19 pandemic and instead left it to individual courts to handle.

‘Everyone has a breaking point’

While data isn’t yet available on renters facing self-help evictions during the pandemic, one can intuit who is more likely to be targeted, said Lisa Rice, president of the National Fair Housing Alliance. “I think it is fair to guesstimate that it is those vulnerable populations who are disproportionately subject to these forms of abusive evictions when there isn’t a pandemic,” Rice said.

Evictions generally affect people with less income stability — disproportionately people of color and single-women households, she said. They may be less empowered to push back.

The tactics can sadly be effective, she added, especially for those who feel intimidated and don’t feel safe in their home.

Cobbling together first and last month’s rent is a huge obstacle for many tenants, and if you’re strapped for cash like so many are right now, the idea of engaging with your landlord or going to court can be overwhelming, said Durana of Eviction Lab.

“In addition, when you do go to court there is an increased risk that it could go on your record,” Durana said. “It could put you in a position in which you then have trouble finding future housing.”

For many families, it’s easier to avoid the court process entirely even though they may have a right to stay and the harassment is illegal and unfounded.

“Everyone has a breaking point,” Durana said.

To help counter self-help evictions, housing advocates are pushing to extend eviction moratoriums, expand relief to renters and raise the bar to filing evictions so there are more legitimate reasons to initiate the process.

Being pushed out of your home is problematic at any point, but especially during a pandemic, said Shamus Roller, executive director of the National Housing Law Project.

“The last thing we want right now is people going around looking for an apartment to rent. That involves travel, interacting with strangers, enclosed spaces and all of the other activities associated with moving,” he said. “And those are the challenges for someone that can find and afford a new place. For other people that get evicted, it means doubling up with another family or homelessness, which come with huge health ramifications.”

While April rent will be covered by a rental assistance program for tenants affected by the pandemic, she said she is trying to work with her landlord to pay back March and May once she starts earning again.

“I want to pay and I’ll pay as soon as I can, but I can’t give you something I don’t have,” she said.