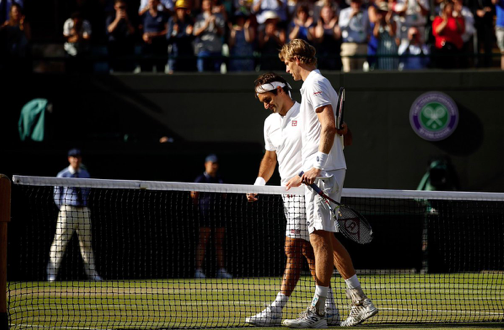 In spite of the fact that Kevin Anderson wants to become an American citizen and Roger Federer represents Switzerland, these two top tennis stars both have South African blood running strongly through their veins.

Kevin Anderson started playing tennis professionally in South Africa at a tender age of just 17. Born in Johannesburg, he spent most of his years playing college tennis in the United States of America where he managed to hone his skills.

Nevertheless, the 32-year-old is evidently still a proud South African citizen. On Wednesday in his post-match interview after dethroning Federer in the Wimbledon quarter-final, he sent a motivational message to South African youngsters.

“I always say I was in the same position,” he said. “It’s not easy coming from South Africa, it’s very far from the tennis scene.”

The Johannesburg-born star is a Proteas and Springboks fan cricket fan, and he usually sends his messages of support on Twitter.

Some of his best-selected displays of support for South African national teams include:

Earlier this year at the Maharashtra Open in Pune Anderson showed off his cricketing skills, and he also has a South African flag on his Twitter bio.

At this stage in his career, Anderson was seen as a player who couldn’t handle pressure situations like the Proteas because he would choke and move from a winning to a losing position

In 2013 he decided to apply for American citizenship for “logistical reasons”.

His patriotism has been in question for a number of years, and many South Africans wonder if he will ever represent his country at the Davis Cup Tournament again. His last appearance was in 2011. And while it is certain that the South African Davis Cup team need his services, Anderson is only interested in improving his ranking and placing himself in a good position to win his first grand slam.

The Swiss master, Federer and Anderson played out to a nail-biting four hours and 14 minutes thriller in a quarter-final at Wimbledon.

Surprisingly, Anderson walked away as the winner, giving himself a good chance of clinching his maiden slam title.

Perhaps the 32-year-old can learn something from the king of grass when it comes to national pride and patriotism. Federer led Switzerland to its first-ever Davis Cup title in 2014.

The 19-times grand slam champion inherited his breathtaking athletic prowess from his mother, Lynette Durand, a South African Afrikaans-speaking woman. She claims to have been a sportswoman competing at a high level. During her school days, she participated in track and field, netball and hockey.

It was during the apartheid days when Durand fell in love with a Swiss man, Robert Federer. They decided to move to Switzerland, and 11 years into their relationship they gave birth to a superstar named Roger Federer with South African genes.

To stay connected to South Africa, in 2003, the now 36-year-old established the Roger Federer Foundation. According to the www.rogerfedererfoundation.org they support educational-structured projects in Southern Africa and Switzerland.

The main purpose of the foundation in Africa it is to provide programmes that will help improve the quality of basic education and early learning.

It has been more than six years since Federer visited his second home but it is clear that his heart is in South Africa. His mother taught him well when she told him that sharing is caring.

It is impossible to take South Africa out of these two tennis players.

They are amongst the top ranked tennis players in the world while Federer has his mother to thank for his athletic abilities and has won it all, Anderson is still searching for his first major trophy.