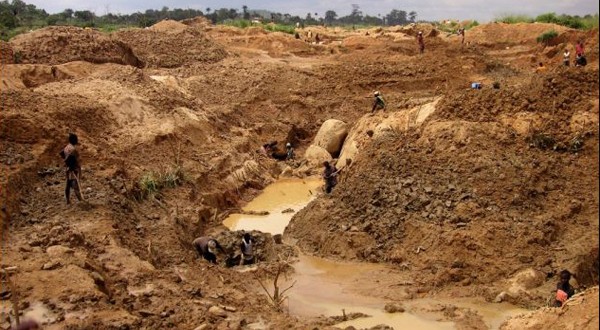 Both the ruling African National Congress (ANC) party and the South African flag have prominent splashes of green featuring in their respective colour schemes. After 1994 the new government was keenly focussed on demonstrating its green credentials in line with our constitutional commitment to environmental protection and sustainable use of our diverse natural resources. Twenty years into democratic experiment we need to reassess how green our political commitment remains.

Exploitation of People and the Environment

Liberation politics clearly recognised that both environment and people were exploited by authoritarian apartheid policies. In 1993, Max Sisulu stated:

The ANC believes environmental reconstruction constitutes a major task of a free and democratic … South Africa,” linking this to a free political environment.

“Environmental conservation” was just another tool of oppression under apartheid, with many forced from their land for National Parks, making it critical to reframe the debate away from colonial and neo-colonial attitudes around exclusion and privilege.

The 1990s were an opportune time to re-examine our common environmental heritage. It was serendipitous that the first Rio Earth Summit, a defining global green gathering, took place in 1992 in the midst of negotiations around our democratic dispensation. Several future South African leaders attended and influenced our emerging environmental legislation.

As a result we finally gained access to internationally recognised norms like public participation in environmental decision-making, environmental justice, and the recognition of intergenerational rights. These principles form the bedrock of sustainable development.

While the tripartite alliance was instrumental in drafting the new legislation, other parties came on board to greater or lesser degrees. The official opposition largely allied themselves to the perspective of funders and supporters, providing a stronger focus on corporate than community rights.

Interestingly, no real semblance of a Green Party emerged in South Africa. This is perhaps a function of how alien the concept of environmental rights remains amongst the public, who continue to grapple with the complexities of political enfranchisement. This is unfortunate as the principles of social justice and grassroots democracy are intrinsic to green politics, extending beyond the obvious focus on ecological sustainability.

A well-intentioned but structurally weak Green Party was created but this imploded under the weight of its self-appointed leader, property developer Judy Sole, who almost singlehandedly destroyed the legitimacy of the brand locally. She predominantly reflects the “green consciousness” of the middle class rather than the far more urgent and real issues faced by everyone else.

Recent South African voting patterns have failed to reflect emergent green trends amongst Northern political structures. The “Greens” are an important part of the Greece’s left-wing Syriza coalition, as well as in Spain and Italy, indicating the emerging power and consciousness of young Europeans. This is also echoed in the United Kingdom where changing political values have driven support toward the Greens.

In order to make sense of the evolution of environmental management it is important to reflect on the shifting sands of political thinking. There is remarkably little difference between the ruling party and the official opposition, each of which is founded upon similar free market, neo-liberal ideologies.

A sufficiently strong voice, capable of providing a countervailing balance, has yet to emerge, from either the political diaspora or from within existing social movements. Most South Africans remain preoccupied with survival and have neither the time nor expertise to deal with often-complex environmental concerns.

However this may be changing. The coalescence of an emergent new left around Numsa and the United Front may provide some momentum toward stronger environmental oversight and enforcement. The reality is that poor environmental conditions primarily impact poorer and working class areas, such as south Durban, Sasolburg and Vanderbijl Park. The realities of good environmental management are tangible and real to this particular constituency.

The reality is that business has effectively captured the environmental debate through greenwash by usurping the stage from rich and poor alike. It has direct access to the political sphere, exacting influence through the non-transparency of our political funding regime and the (promise of) secondment of elected officials into lucrative positions through their political contacts.

Corporate South Africa has single-mindedly focussed its profit-informed motives to weaken environmental legislation and oversight wherever possible. This has manifested in several supplements to our National Environmental Management Act (NEMA) and more importantly the dilution of its regulations. Today it is barely recognisable from its original iteration, having transformed from a primarily consultative process to a largely rote, authoritarian “tick the box” exercise.

Corporate capture is epitomised in its malign influence of the Air Quality Act and its regulations. The Act was promulgated in 2004, six years after NEMA. However the regulations and amendments which facilitated real action to be taken against polluters, were only finalised in 2014, with immense horse trading behind the scenes, particularly by embedded lobbies like Eskom, one of the world’s largest greenhouse gas emitters.

To further add insult to injury, our biggest polluters, Eskom and Sasol, instrumental in these delays, immediately launched legal action for exemption from emission regulations. The state rewarded them with a further five years grace to comply with the regulations. Those affected by acid rain, pollutants and poor health remain marginalised. This erosion of the fundamental principles of environmental management has steadily sapped the morale of those fighting for environmental justice.

Because our economy is so dependent upon mineral extraction, environmental management conflicts have undermined the relationship between the Department of Mineral Resources (DMR) and the Department of Environmental Affairs (DEA), who jointly handled mining applications, and has resulted in a cockeyed compromise.

Ostensibly in order to streamline the process – read: to facilitate processes for the benefit of mining companies – the entire regulation of mining applications has now been handed over to DMR. This goes far beyond a simple conflict of interest. How can a department that promotes mining simultaneously provide stringent, independent oversight?

These examples illustrate how the social and environmental sphere has been sacrificed upon the alter of economic pragmatism. Coal mining has been permitted at Global Heritage sites like Mapungubwe, adjacent to the oldest national park in the country, Hluhluwe, and is gradually eradicating the extremely sensitive biota of the Mpumalanga wetland Lowveld, the Waterberg and elsewhere.

Affected community voices have effectively been silenced. If they are raised, they are often insufficiently articulated or projected to the dominant administrative, political and economic powers. Worse, because of the structure of environmental regulation, the applicant, be it mining company, property developer or government, carries every advantage in putting their views front and centre and always gets the last chance to comment, diluting any external concerns.

The last decade has seen a marked weakening of public participation in environmental governance, on the one hand, yet a strengthening of environmental oversight by specialised units like the Blue and Green Scorpions on the other. However these units tend to take on environmental transgressions that are so egregious that no alternative remains that the state take action, and then often only after the horse has well and truly bolted.

We have established and implemented some excellent environmental legislation over the past 20 years. But the reality is that environmental governance has taken a backseat to the god of free market fundamentalism. This is aided and abetted by both the historical and the emerging plutocracy, neither of which have ever shown sufficient awareness of the necessity to preserve the ecosystems that support us all. As our green rapidly withers to brown and grey, we desperately await a new champion to nurture the bond between people and planet.

Glenn is a multidisciplinarian with a background in geography. Besides being a published author, he also edited "A Patented World? The Privatisation of Life and Knowledge," published by Jacana in South Africa. He currently is on the editorial board of the SA Journal of Natural Medicine. Additionally, Glenn has written many commentaries and analyses of wide ranging issues including waste management, water use, food security, genetic engineering, nanotechnology, health, agricultural fuels, marine resources, climate and many other environmental and socially relevant issues. He has also presented many papers and talks to a wide range of audiences. He specialises in communicating complex scientific issues in an accessible manner. He is a freelance writer and researcher.
Previous Is South Africa the World’s Most Generous Donor?
Next Cecil John Rhodes Statue: Confronting Colonial Discourse