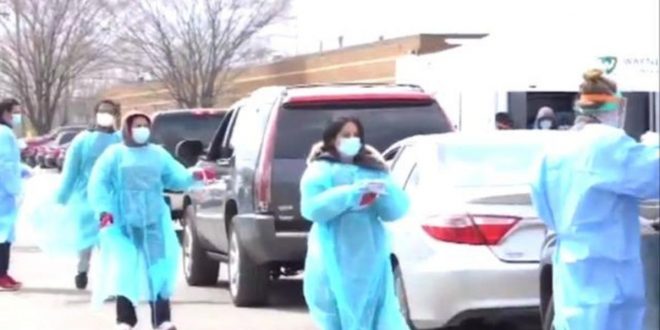 “State of Testing”: Michigan struggles despite ramping up COVID-19 tests

“CBS This Morning’s” multi-part series, “State of Testing,” looks at the state of resources and accessibility to coronavirus testing. In addition, the series will report on how states are responding to testing needs, whether they are developing testing plans, and what testing benchmarks they are looking for as these states make the decision to re-open.

Deborah Gatewood died from COVID-19 after being denied a virus test multiple times at the very hospital where she worked, according to her daughter, Kalia Corrothers. In an interview with CBS News, Michigan Governor Gretchen Whitmer called Gatewood’s death “the saddest reality of a country that was under-prepared for a global pandemic.”

“The fact that we’ve never had enough tests, that the federal government didn’t prepare, contributes to the fact that we had to ration tests at the front end of this pandemic,” Whitmer said. “And it just breaks my heart.”

Whitmer has since expanded testing criteria to include those with milder symptoms and all essential workers. The expansion came too late for Gatewood, who was 63 years old.

Corrothers’ mother worked at a Beaumont hospital, drawing blood for over 30 years.

When Gatewood came down with a fever, Corrothers said she tried to get tested at the same hospital but was denied “four times.”

Beaumont Health told CBS News in a statement, “As patients come to Beaumont for care during this pandemic, we are doing everything we can to evaluate, triage and care for patients based on the information we know at the time. We grieve the loss of any patient to COVID-19 or any other illness.”

Though the state’s testing has doubled in recent weeks, shortages of swabs and chemical solution are still impeding testing growth.

Whitmer’s goal is to test at least 14,000 people per day. At the time of reporting, they are testing roughly half that amount.

The Detroit area has been hardest hit, with over 70% of the state’s cases and where people of color have been disproportionately affected.

To try and reach most city residents, walk-up testing has been set up for low-income Detroit residents without cars.

There are fewer cases on the western side of the state, but there are still spikes in places like Kent County, which includes Grand Rapids.

At a testing site at Mercy Health in Grand Rapids, one resident said it was significantly easier getting a test “nowadays” compared to “just two, three weeks ago.”

Cherry Health, which runs a nearby site, has seen a 25% increase in testing because of Governor Whitmer’s expanded criteria, and more state funding.

To keep up testing, she said her employees have had to rewear gowns multiple times, unless they get soiled.

While trying to navigate the health crisis, Cherry Health is also grappling with the financial crisis. They had to lay off 25% of their staff due to the economic shutdown and cancellations of elective procedures.

It is one of the effects of the state’s strict stay-at-home policy. Through executive orders, Governor Whitmer has shuttered most businesses and confined residents largely to their homes. According to the governor, CDC guidelines say they should be testing between 1 to 2% of Michigan’s population “in order to have some confidence to reopen.”

“It’s going to be a little while before we get there,” she said.

Some residents disagree, including protesters who gathered at the state capitol on Thursday, some with guns, demanding an end to emergency restrictions.

Sheriff Ted Schendel of rural Benzie County thinks the governor’s orders go too far. His county has had a handful of cases and no deaths from the virus, and residents are “desperate” to get back to work.

Schendel argued that a “one-size-fits-all kind of approach” is not working. “People are just saying, ‘hey, look, enough’s enough. Let’s give us a chance to get out, go back to work, put food on the table for our families.’ And we’ll follow the CDC guidelines.”

He said Whitmer should have more faith in Michigan residents.

But the governor says testing data, above all else, will help drive her decisions to ease restrictions. She’s also considering further opening the economy region by region if the data shows it’s safe.

“Some people would think we should move faster,” she said. “I’m going to listen to the public health experts. And I’m going to work with the business side of the equation to make sure that we’ve got the protocols to keep people safe when it is safe to start to reengage.”

For more information about Beaumont Health’s testing and admission processes, they ask that you visit their website and look at the Q&A near the bottom of the page.

Previous Coronavirus may last 2 years, study warns. And its second wave could be worse.
Next Bandcamp is waiving fees today in support of artists