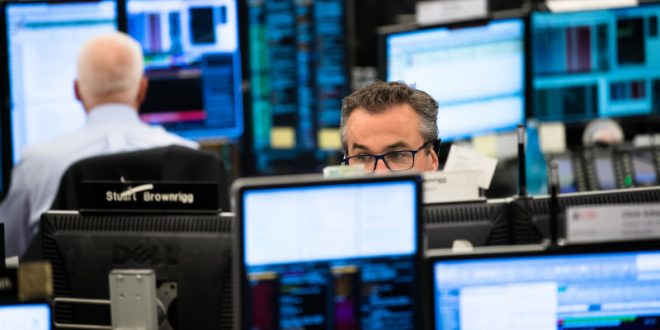 When the S&P/ASX 200 hit a record high of 7162 points on February 20, stockbrokers could barely see the carnage ahead.

By February 21, Italy had reported 16 cases in a day, including one death, but deaths outside China stood at just 11.

Investors believed cash rate cuts ahead meant it would take more than a virus to end the stockmarket’s decade-long bull run.

Burns’ team was about to work through an historic market crash that would deliver 15 of its top 20 days by trade volume ever – just as the virus’s killer threat kept up to 70 per cent of his 900 staff working from home on any given day over the second half of March.

“We really saw volumes start to build just slowly in late January, then through February as more information was coming out,” Burns says.

“February 24 was when we first saw a real spike in trading and it hasn’t really abated from there.

“The buzz on the floor was quite amazing, not like anything I’ve experienced in 20 years in digital broking.”

On Friday March 13 the panic and confusion propelled the market to a record-breaking 13.7 per cent intraday swing. Jaws dropped as it swung from an 8.1 per cent morning loss to 4.4 per cent closing gain, versus the previous day’s close.

“I was broking back in 87, but this was very different. It’s fear and panic based on a different set of rules,” says Vic Jokovic, chief executive of Australia’s number two stock exchange Chi-X.

“It’s unlike anything we’ve seen before. In the GFC the info was coming out over 15 or 16 months. This was three or four weeks. We’re in uncharted waters. They’re much scarier moves. We don’t know what’s around the corner.”

On Friday the 13th, Chi-X matched just under 2 million trades, its larger rival the ASX just over 5 million, and the ASX posted its worst week since the GFC.

Trading volumes were so large on March 13 parts of the market’s infrastructure started to wilt under the pressure.

The concern spread to the financial regulator ASIC. Its markets team was worried an operational log-jam processing trades could lead to a catastrophic market shutdown.

“ASIC asked for a meeting on the Saturday, nine of the biggest brokers by volume, ASX and myself. We had an emergency call at 1pm on the Sunday.”

“We discussed that had it happened on any other day there would have been issues with settlement being concluded within the T+2 time period.

“We were fortunate as an industry that it happened on a Friday, as we had the weekend for teams of people both across the exchanges and back offices to deal with the backlog.”

Rise of the robots

According to Jokovic the market was under pressure partly due to profit-seeking algorithmic – or computer-programmed – machines.

“It was clear a lot of that volume had been created by some very large trading firms using those nine brokers. Primarily algo clients of the brokers.

“ASIC took action and said we’re going to ask those nine brokers go to those large clients and ask them to, or direct them to, reduce their volumes by 25 per cent.”

Investors put the initial 8 per cent drop on March 13 down to retail investors selling in capitulation after a week of massive losses capped by US markets tumbling 9.5 per cent on the Thursday night.

According to Jokovic, the historic swing higher in the afternoon was unrelated to algo traders. The Chi-X boss pegged it to the Reserve Bank announcing a stimulus package and the Prime Minister meeting with state premiers.

“A lot of mums and dads did decide to panic sell out that day. A lot of that selling has been done.

“The brokers and exchanges were too busy to be panicked. The moves were so big, and the swings so large, that we were in completely new territory.”

Other market truisms repeated themselves.

“There’s two things in the stockmarket; greed drives it up and fear drives it down. The power of greed is nowhere near the power of fear.

“When the fear hits, people run for the door. They just all jumped, which is sad as it breaks people too.”

The broker says the virus turned dealing rooms into ghost rooms, as masses of trading personnel shifted to working from home.

However, the machines, immune to the virus, worked away as usual.

“They say on any one day something like 50 per cent of trades on US markets is just algo or quant traders. In Australia 30 to 40 per cent of it is automatic algo trading, just machines trading stocks.”

In today’s market, algo or computer programmed trading is largely split into two camps. One is speculative trading.

It involves high frequency or momentum trading computer programs popular in the public’s imagination as flipping stocks for their hedge fund masters’ profits.

The second camp of algo trading involves computer programs sold by investment banks that allow a broker to buy or sell a fixed amount of shares at a volume weighted average price of a security’s traded volume through a fixed period.

This kind of program allows the brokers’ clients, institutional buyers or sellers, to enter or exit stocks without showing their hand, while obtaining a weighted average price up to a fixed limit for example.

“It’s an agnostic algo that’s designed to pick a trend, because of this it picks on anything. So they’ll trade even the small stocks and will have a significant effect, as some of the trades will only sell 20 or 30 shares.

“When it breaks a moving average barrier it triggers off a whole pile of other sellers coming over the top.”

In Potts’ opinion algos shouldn’t be allowed to trade thinly traded stocks as prices end up being dictated by faceless machines, rather than fund managers.

“They have a deleterious affect on the market and hurt mums and dads whose livelihood is dictated by law that says that 9.5 per cent of your earnings go to a super fund.

“In many cases they ruin little companies, as some have covenants on loans around their market caps, some of these machines drive the prices below the capitalisation. These machines should be under more control.”

According to Chi-X’s Vic Jokovic, the algos can trade so profitably because the institutional brokers offer incredibly cheap fees.

“Some of these high-frequency houses wouldn’t pay much more than that to the broker. So the margins are incredibly thin. Brokers out there have an average cost per trade of 0.36 to 0.38 per cent of 1 basis point at the bigger end of town. That is their cost to the exchange, plus what they calculate to be their own break-even cost.

The average blended commission rate an institutional broker will charge a fund manager has now fallen from 15 basis points of a trade’s value to below 10 basis points says Jokovic. Partly because algos now do much of the brokers’ traditional work.

“Some of the trades are done high touch, where the broker gets on the phone and works the order and crosses it up through a block.

“[Others are] down to [where] the order is executed via an algorithm that’s split up and executed in tiny lines. Not all algo is high frequency. A lot of it’s simply the broker executing the order given to it by a client through the day. So the algo slices it up into little slices.”

In total Chi-X’s average equity traded volume for March climbed 70 per cent over the previous 12 months’ average, while the ASX reported an average of $12 billion of stock traded per day – more than double March 2019’s result.

Stockbroker Potts credits Microsoft Teams as a “god send” for getting his dealing room through the crisis, as everybody in the firm could talk to each other remotely by text.

Retail-broking king Burns credits his real world team’s “amazing response” in managing a frantic workload at the same time as it shifted to emergency business continuity plans and remote working.

Jokovic says these are different, scary times, but like every market correction there’ll be light at the end of the tunnel.