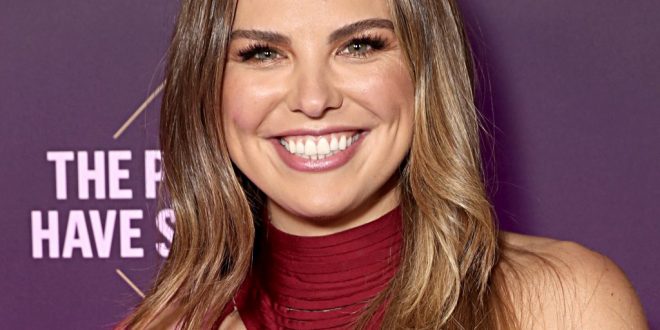 After witnessing Peter Weber fall head over heels for Hannah Brown in The Bachelorette, fans thought the new bachelor would take the reigns and spearhead a season filled with heart-fluttering romance. But, merely a few weeks into the 2020 season, viewers realized a fairy tale romance was not in the books. Thus far, Weber has been referred to as one of the worst bachelors for his indecisive behavior. Now, Brown has weighed in on what’s lacking from Weber’s Bachelor journey by comparing their seasons of the ABC reality franchise.

In an episode of ‎Scrubbing In with Becca Tilley & Tanya Rad, Brown opened up about Weber’s season of The Bachelor during a live show recording of the podcast in Los Angeles on Feb. 13. First, the former bachelorette discussed watching her season of the reality series. She also noted that processing the events on the show was good for her and it was easy to see why she liked certain contestants.

Then Brown compared her season of The Bachelorette with Weber’s Bachelor run, observing Pilot Pete’s season doesn’t delve into his connections with the women.

“I think that’s what’s missing a little bit from this season,” Brown said. “You knew — even if you didn’t agree — why I liked a person. I really did dive into the men there and try to give it my all and be completely vulnerable with everyone.”

She continued: “When watching, too, you knew where I was at the whole time. It’s because I was truly all-in with everything. Even in moments, I was very honest, I was like, ‘I’m not all-in. I’m trying to be, but I’m scared.’ I just think that’s really important if … everybody’s going to be invested in your life and you’re doing it for the right reasons.”

Brown also touched on the reality of being a lead within The Bachelor franchise.

“You can’t care about the camera being in your face because, at the end of the day, that camera’s going to be gone,” she said. “You might still have something in your teeth, a boogie in your nose, and you gotta just go with it.”

Hannah Brown’s advice to Peter Weber ahead of ‘The Bachelor’

Now, Brown’s remarks echo the former bachelorette’s advice to Weber ahead of The Bachelor premiere. When speaking with Entertainment Tonight in November 2019, Brown told Weber to “really get to know the person without the cameras and to make sure that you’re really vulnerable and honest with each other.”

But even so, the Dancing With the Stars champion made it clear she wants what’s best for Weber and hopes he receives the ending of his dreams.

“You really need to understand what your relationship is. And I hope that [Weber’s] is a fairy tale and something he’s always been looking for,” Brown said.

Peter Weber defends his indecisive behavior on ‘The Bachelor’

By The Bachelor Week 6, fans were exhausted by Weber’s season, from the pettiness within the house to the pilot’s wishy-washy actions. Then when speaking with E! News, Weber addressed his behavior. And although the reality series made it seem like the 28-year-old didn’t know what he was doing, Weber claimed he had a plan from the start.

“Listen, I always had frontrunners and people think, ‘He’s making crazy decisions, he doesn’t know what he’s doing,’” Weber said. “I promise you, I knew exactly what I’m doing.”

He added: “The show and the process of the show, you have to give out so many roses every single week. So you have to keep people around. But I knew what I was doing.”

Weber also revealed the connections with his frontrunners will become more apparent moving forward. “You guys are gonna see that come together here in the next couple of weeks,” he said. “And the clarity that I always had will become more obvious.”

But regardless of what happens as Weber’s season of The Bachelor continues, it seems likely he receives some sort of happily ever after.

“I followed my heart the entire time,” Weber told E! News. “Stuff happened until the very end. And it was not easy for me at all. But I am happy, and I’m happy with where I’m at.”