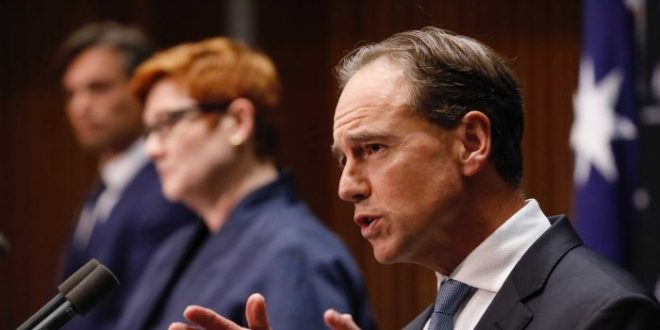 ‘The curve continues to flatten’: New cases below 100 for first time in three weeks

For the first time in three weeks the number of Australians testing positive for COVID-19 has fallen below 100, but the Government has warned the fight against the virus is far from over.

“Very significantly, the curve continues to flatten,” he said.

“Fewer cases, fewer risks, fewer lives at risk — but we still have a huge way to go.”

As of Thursday afternoon Mr Hunt said there were:

He said the numbers of people in hospitals and on ventilators were particularly promising.

“All of those numbers are down from where they have been at their peak,” he said.

“I think that is an important message as we head into Easter.”

Mr Hunt said more than 323,000 people had been tested for the coronavirus, and the new figures showed one of the lowest rates of positive cases so far.

The Health Minister also pointed to the fact that as more data became available, it painted a clearer — and positive — picture of how Australia was faring.

“While we have been cautious over the last two weeks as we have seen the early data, what we’re seeing now is a genuine consolidation,” Mr Hunt said.

“Now we are in this period of consolidation, of suppressing the virus, and we are seeing those results.

“In the 24 hours to this morning’s report, there was an increase of 96 cases.”

But he made it clear while the figures showed a move in the right direction, it was not a reason to ease any of the measures currently in place.

“We haven’t changed our guidance over the six-month period, but where we can take early steps that are safe, then we will obviously look to do that,” Mr Hunt said.

“We are in the fortunate situation of having a lower rate than the vast majority of the world per capita, and that means we can look at what is working and what is not working in some countries.

“Right now the number one task is to ensure we retain the process of suppressing the virus and to continue the planning for the slow, careful steps out.”

“That strategy needs to be very, very nuanced and carefully thought out, and it is under consideration by the Australian committee as we speak,” he said.

“Part of that is informed by [data], we have 6000 patients’ worth of data at the moment, to get our own impression of how the epidemic is tracking in our community.”