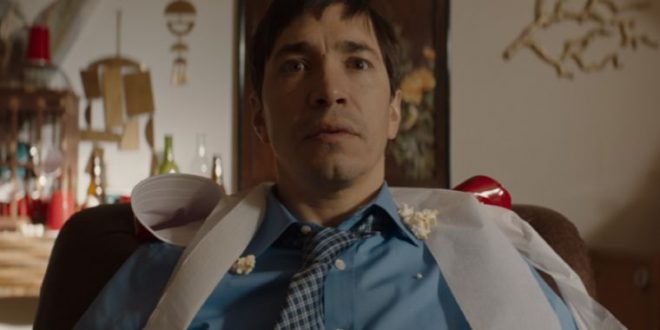 The Wave takes us on a trippy, surreal journey through a fractured timeline

An ethically challenged insurance lawyer finds himself on a bad hallucinogenic trip that makes him question the nature of his reality, in first-time Director Gille Klabin‘s psychedelic sci-fi thriller, The Wave.

Frank (Justin Long, Galaxy Quest, New Girl) is a lawyer for an insurance company who finds an error in a life insurance claim form for a deceased firefighter that will allow his firm to deny the claim outright. The company will save $4 million, which would put Frank on the fast-track for a promotion. And he seems untroubled by any hardship this denial of claim will cause the fireman’s widow and children. His co-worker Jeff (Donald Faison, Scrubs, Ray Donovan) talks him into a night on the town to celebrate (“It’s Tuesday, Booze Day!”). And that’s where things start to go horribly wrong for Frank.

The guys pick up BFFs Natalie (Katia Winter, Sleepy Hollow) and Theresa (Sheila Vand, A Girl Walks Home Alone at Night) in a dive bar, and the four end up at an after-hours party. That’s where Frank and Theresa meet the decidedly strange Aeolus (Tommy Flanagan, Sons of Anarchy), who offers them both a nameless experimental hallucinogenic drug. Against his better judgment, Frank takes it. “It’s supposed to hit you like a wave,” Aeolus assures him—and suddenly Frank finds himself alone in the house, hours later, surrounded by detritus from the party with no wallet.

Convinced he was drugged and robbed, Frank spends the rest of the film trying to piece together what happened to him that night—a task made more difficult by his continued hallucinations, long after any drug he’d taken should have worn off. The side-effects include lots of unpredictable time jumps. In desperation, Frank turns to Jeff for help, and the two join up with Natalie to find Theresa, who is missing. And then things start to get really crazy.

There’s an overall theme of karmic justice, of restoring balance to the universe by sending Frank on this mind-bending journey. “You’re almost there,” Aeolus assures him toward the end of the film. “The universe is trying to tell you something.” And the fractured timeline mirrors the fracturing of Frank’s carefully structured but unsatisfying life before that fateful party, leading to a kind of personal enlightenment.

The film debuted last year at Fantastic Fest, to mostly positive reviews. There are elements of After Hours (1985) and Jacob’s Ladder (the 1990 original, not last year’s remake) to this strange, engaging film, but Klabin succeeds in putting his own stylistic stamp on it. Having the audience experience what Frank is experiencing, skipping around in a fractured timeline trying to uncover the truth about what happened to him, is part of what makes this film so interesting and engaging. But it also makes the plot a bit incoherent and hard to follow, particularly in the second act.

Fortunately, the pieces all start to come together in the third act, although I wouldn’t say it all becomes crystal clear. It’s never quite clear what happened to Theresa, for instance, or whether Justin’s memory of Theresa is even the same woman. (She certainly features prominently in his bizarre visions, set in a jewel-toned alternate dimension.) That said, I very much like the film’s insistence that “you can’t change what’s already happened.” Whatever Frank uncovers in his surreal journey, there’s no possibility of a do-over. But he has learned one important lesson: “Time is a far more relative concept than I thought.”