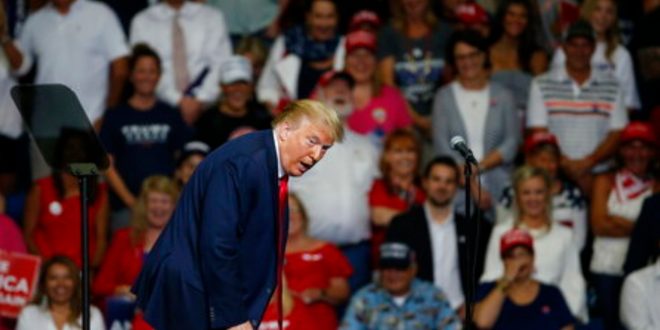 President Donald Trump spent more than 10 minutes bragging about his ability to walk down a ramp and drink water out of a glass during his Saturday campaign rally in Tulsa, Oklahoma, where COVID-19 infection rates are on the rise.

The rally billed by the president’s reelection campaign as a massive relaunch was instead marked by empty seats and familiar discursions.

Ramps, though, have become a new fixation.

“Anyway, that’s a long story,” Trump said after about 14 minutes of explaining what happened when he walked down a ramp after his speech to graduates at West Point the week before. “But here’s the story. More the ramp than the water, but I have lived with the ramp and the water since I left West Point.”

During that speech in New York, Trump seemed to struggle to lift a glass of water to his mouth, and later labored as he slowly walked offstage and down a ramp, leading to wild speculation about his health.

That speculation, Trump said, reached his wife. As he had it Saturday night, when he called Melania Trump after his West Point speech, she informed him he was trending online. He asked if it was because of the speech. “No, they don’t mention the speech,” he said she told him. “They mention the fact that you may have Parkinson’s disease.”

Trump insisted in Tulsa that the conditions at West Point — namely the sun, the fatigue of saluting 600 cadets, and his leather shoes — were to blame for the viral video clips.

About 13 minutes into his story, the president drank from a glass of water and was met with chants of “four more years” from a crowd far smaller than his campaign had advertised.

The Tulsa event was Trump’s first campaign rally since the coronavirus pandemic spiked across the United States, and his campaign had previewed it as a huge celebration of the business re-openings underway.

It didn’t quite work out that way. First, the campaign changed the date of the rally, originally scheduled for Juneteenth, under booming criticism. Then over the last week, the numbers of confirmed COVID-19 cases in Oklahoma rapidly rose, including in Tulsa. Six of the Trump campaign’s own staffers in the city tested positive for COVID-19. The rally RSVP numbers that Trump’s campaign manager Brad Parscale hailed as “epic” and close to one million wound up not even coming close to filling up the 19,000 person capacity arena on Saturday. The campaign’s plans for Trump to speak to an overflow crowd were scrapped when the overflow crowd turned out to not exist.

But those who did come to the rally — held indoors, without enforcement of social distancing or other measures to limit the spread of the coronavirus — at least got a lot of ramp.

“I said, general, I have got myself a problem, general,” Trump said, recalling the incident at West Point. “Because I’m wearing leather bottom shoes, which is good if you are walk on flat surfaces. It’s not good for ramps.

“This was a steel ramp. It has no hand a rail. It was like an ice skating rink. And I said, ‘general, I have a problem.’ And he didn’t understand that at first. I said, ‘there is no way. I just saluted almost 600 times. I just made a big speech. I sat for other speeches. I’m being baked, I’m being baked like a cake.’ I said, ‘general, there is no way I can make it down that ramp without falling on my ass. I have no railing.'”

Trump proceeded to reenact the incident.

“So what happens is I start the journey inch by inch, right? And I was really bent over, too,” he said.

“And I ran down the rest,” Trump added. “I looked very handsome. That was the only good thing.”

Previous Coronavirus deaths in U.S. could reach 200,000 by October
Next Ensure the tray table is up and your mask on: air travel in the era of COVID-19